Saying goodbye to Republic of Doyle with Richard

Last week I received an invitation to meet Jake Doyle from CBC’s TV detective series, Republic of Doyle, at a party celebrating the sixth and final season of the show, which premieres tonight on CBC.

The only person I know who religiously watches the Newfoundland-based drama-comedy is my awesome stepfather, Richard. I asked him if he wanted to come on my Doyle date. I knew he’d say yes because a few years ago, he was working in St. John’s and came across the Doyle car, a 1968 blue GTO (of which there are actually three for the show), at a fundraiser. Here’s Richard with the Doyle car: 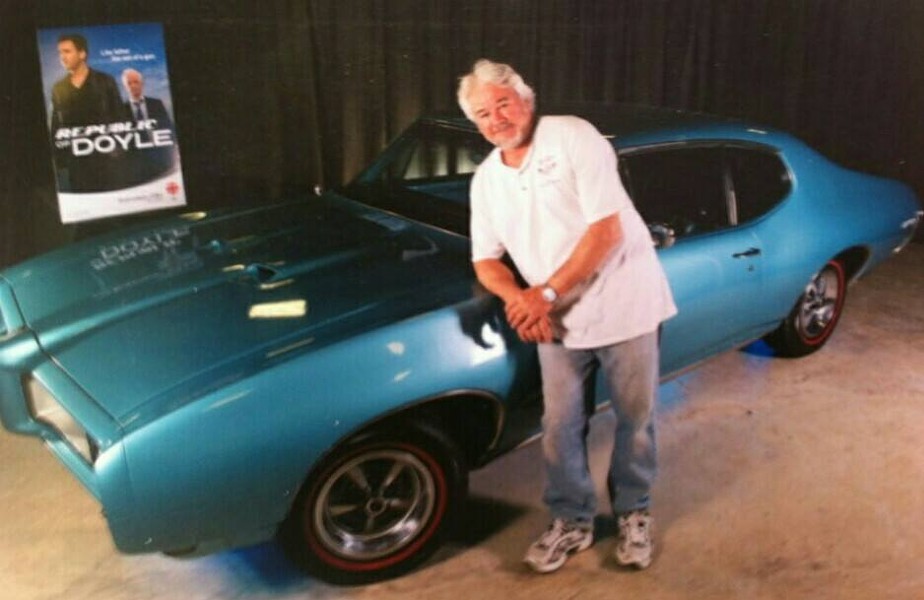 I’ve never really watched Republic of Doyle regularly but I have seen a few episodes and it’s pretty funny. From the incredible roster of guest stars over the years (like Russell Crowe, The Great Big Sea guys, Shannon Tweed and Gordon Pinsent) to the regional comedic inflections of Newfoundland and the obvious but saltier elements of police-show camp, it’s a sweet series that was driven hard by Hawco.

When we got to Durty Nelly’s, there was Doyle memorabilia and throngs of fans cruising around the free snack trays and snapping pics of Hawco when he would make his generous rounds. “I like him better without the moustache,” Richard said. I laughed because that’s funny. But unlike the Doyle commoners, me and my step-dad got our own private date to the side, to drink beer and chat with Doyle himself.    “I first had the idea when I was 19,” said Hawco. “I loved all those detective shows in the ‘70s and ‘80s, like Rockford Files and shows like that, so I knew if I was going to do this show, it had to be set in St. John’s, it couldn’t take itself too seriously. You can’t have a guy driving a GTO around like that seriously.”

Raised near St. John’s, Hawco studied at the National Theatre School before lucking into a series that he could star in, write, produce and show-run for six seasons. In the middle of filming the fifth, he knew it was time to wrap it up before he burned out.

“What are you doing with the GTOs?” Richard asked.   “Well, one’s got my name on it,” Hawco answered, “But we’re keeping them around because we’re hoping to do a few feature films over the next few years, and carry the show on that way,” which sounds awesome. He’s also working on a few other Canadian features but he’s sad to see the end of the series.  “It’s been amazing. I couldn’t have done it without my entire crew and the people of St. John’s, it’s been an overwhelming experience,” he said. “I can’t believe the support we’ve had. I get pretty emotional thinking about it, and even that you brought your step-dad along for this interview because he just loves the show, I mean, that really means a lot to me.” We cheers-ed to that, and then Doyle looked intent.    “Did anyone ever tell you that you look like Kenny Rogers?” Doyle asked Richard, which was hilarious because yeah, he’s heard that one. “I actually signed an autograph as him in the Dominican Republic,” Richard laughed. I think we cheers-ed to that, too. Hawco asked if we had any other questions. “Yeah, I do!” Richard asked, thinking of the closing scene of last season’s finale episode, “Is Leslie dead?”  Hawco replied: “Good question. You’ll have to tune in to CBC on Wednesday night and find out.”