Nova Scotia government says COVID-19 is inevitable, urges people to "do their part" 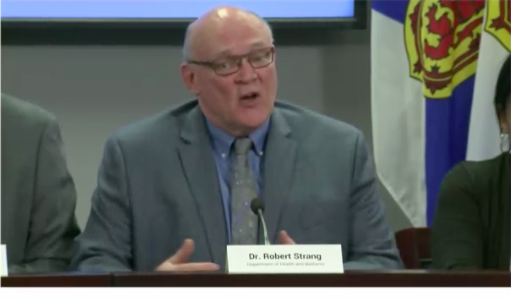 There are no confirmed cases of the coronavirus yet in Nova Scotia, but Strang said its arrival in the province is "inevitable."

McNeil announced that all public sector employees who travel outside of Canada will be required to self-isolate for 14 days afterwards (with pay), urging those heading out on March break vacations to take precautions.

Schools are not being closed—but children and youth who go away on March break must self-isolate for 14 days upon return to Canada before going to school or daycare.

The province also recommends that gatherings of more than 150 people are cancelled or postponed. This includes large assemblies or gatherings in schools. (One of the arguments for not closing schools—some of which have thousands of students—is that extending March break until later in the month or April doesn't ensure that students aren't travelling internationally within 14 days of returning to school.)

"It is all [sic.] incumbent on all of us to be responsible for others," said McNeil, explaining that precautions being taken now are an attempt to slow the spread of COVID-19 and manage the burden on health care systems and providers. These precautions are also important to ensure the safety of vulnerable populations (such as those who are elderly or immunocompromised—like people undergoing chemotherapy or living with immunocompromising conditions).


"It is irresponsible," said McNeil, "for any of us, if we've gone to a place where this virus has been, and come home and not isolated ourselves to protect our fellow citizens."

The number of phone lines at 811 has been doubled this week to keep up with demand. The province is urging anyone feeling sick to call 811 before heading to a health care facility—and now urging Nova Scotians to check the 811 checklist first, before calling 811.


Concerns were raised about the spread of misinformation around the virus and Nova Scotians are urged to check official sources and media (like The Coast) to stay up-t0-date on information—especially considering that things are changing by the day.
As of this morning, 226 tests have been completed and come back negative in NS—which have to be sent off for national testing before being officially declared.

Strang warned that there's a possibility there may be more specific direction from the province in the coming weeks around travel, quarantine and protocols. Travel within Canada has not been restricted, but that could change if the virus spreads.

This week, the World Health Organization officially called the spread a pandemic (a disease is an epidemic when it spreads over a wide area and many individuals are taken ill at the same time. If the spread escalates further, an epidemic can become a pandemic, affecting an even wider geographical area and a significant portion of the population becomes affected.)


Come back here or check with NS public health for the latest reliable updates. In the meantime, wash your hands, cover your cough, wipe commonly used surfaces and stay home if you feel sick.