11 things that changed Sunday around COVID-19

Now that Nova Scotia has cases, more measures are announced for bars, casinos, schools and travellers. 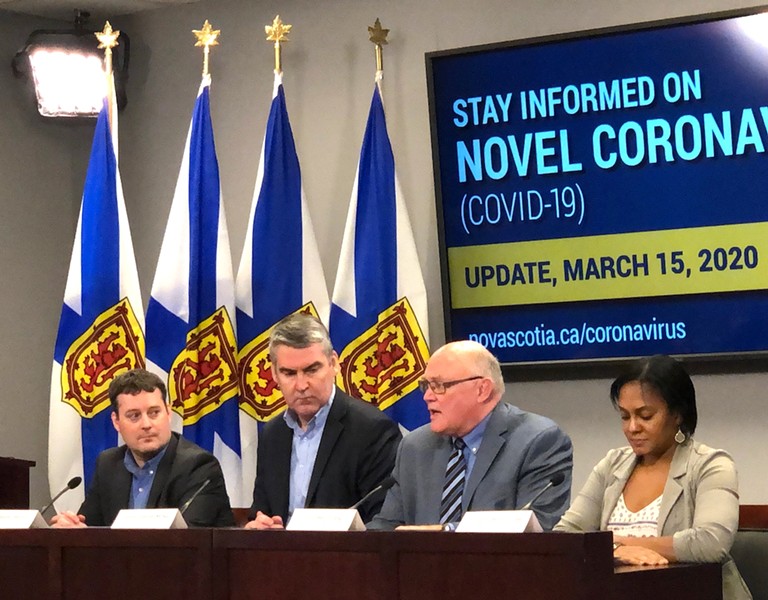 Sunday afternoon the province gave a coronavirus media briefing. It looked a lot like Friday’s briefing, with four officials—premier Stephen McNeil, health minister Randy Delorey, and both the chief and deputy chief medical officers of health, Robert Strang and Gaynor Watson-Creed respectively—sitting in a row, behind microphones, in front of Nova Scotia flags. But where the takeaway from Friday’s briefing was the virus is coming, Sunday's message is that it’s here. These are the things we learned at Sunday’s briefing, including changes to protective measures the government is allowed to implement under the Health Protection Act.

1Three people have tested positive for COVID-19 in Nova Scotia. They are unrelated to each other, but all recently returned to the province after international travel. The three are a Kings County woman in her 60s who was in Australia; a Haligonian man in his 50s who was at a conference in California; and a 30something man from Halifax who was travelling around Europe.

2These cases are technically "presumptive," as in presumed to be COVID-19. Nova Scotia’s testing facility was recently certified to give a presumptive diagnosis, but the federal lab in Winnipeg has to make the official diagnosis. The national lab needs 12 hours to make its diagnosis, and Strang wasn’t sure if the samples from the three patients made it onto a plane Saturday night, or if they went out Sunday. Either way, official word will be known shortly.

3 The three patients are isolated in their homes, managing their symptoms. Other people the three were in contact with have been directed to self-isolate themselves in their homes. "Fortunately in these three cases, they’ve had a small set of close contacts," Strang said.

4 Restaurants, bars, movie theatres and all other businesses and organizations have to practise social distancing. This means keeping people two metres apart, and limiting gatherings to under 150 people. On Friday the premier announced that large gatherings would not be allowed, but the social-distancing requirement is new from Sunday’s briefing. "If that means moving tables or seating, do so," said the premier, who also thanked bar and restaurant owners for acting quickly after Friday to limit crowds. (Nothing was said about direction for the serving staff working between those two-metre-apart tables.)

5Public schools will be closed for at least the next three weeks, Monday March 16 through Friday April 3. The coming week was the March Break holiday anyway, which parents had to prepare for, but now it’s like a three-week March Break. Plans to make up for lost class time are underway.

6Parents who prepared for March Break by signing their kids up for various camps are now out of luck. All March Break camps are cancelled.

7Daycare centres for kids under five are also shutting down. They don’t have March Break and were expecting to be open next week, but that changed Sunday. To ease the transition from functioning normally to closing, the daycares can open Monday, March 16, but will then be closed like public schools, Tuesday March 17 through Friday April 3. And like public schools, that opening date may change depending on future coronavirus developments.

8International travel received attention Friday, when some people—including public-school students, government workers and people who went to coronavirus hotspots—were told they would have to self-isolate for two weeks after returning. But Sunday, the travel measures were increased. Now anyone who travels outside Canada, no matter who they are or where they went, has to go into quarantine at home for 14 days when they return to Nova Scotia.

9The message that all international travellers have to go into a two-week isolation—whether or not they show the fever and/or cough COVID-19 symptoms—will be disseminated at the airports in Halifax and Sydney. Digital billboards have the information, Nova Scotia is working with Canadian Border Services on screening and starting Monday there will also be health inspector in the airports. "This is a time not to think about ourselves but a time to think more about each other," said Strang. "So I really appeal that people who are being told or asked to self-isolate, they need to adhere to that."

10Effective immediately, visitors are no longer allowed at long-term care facilities, where people who are at heightened risk of developing a serious case of COVID-19 live. That is residential health-care operations like nursing homes, seniors’ centres and/or care centres for people with disabilities. (Now's a good time to get your grandma on FaceTime).

11Finally, the casinos in Halifax and Sydney will be closing tonight at midnight, and any bars with video lotto machines will have to turn the VLTs off. McNeil did not give a re-opening date. Let’s hope that all of society gets lucky and it’s sooner rather than later.