Week 1 recap: preparing for the worst

Nova Scotia’s government gets ahead of the curve in its COVID-19 response, to try and flatten the infection curve.

March 22, 2020
comment
Anyone else feel like a year went by in the last seven days? Somehow it was just a week ago, Friday March 13, that provincial officials held the first of the afternoon webcast briefings that quickly became the COVID-19 version of Must See TV in Nova Scotia. 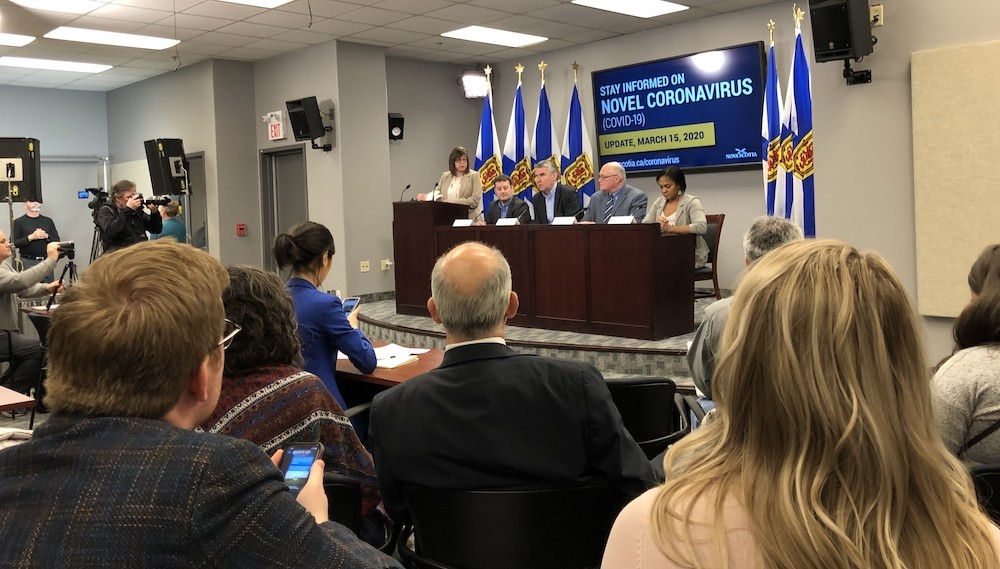 The physical setup of the briefings changed to mirror our response to the virus. That first Friday, with no cases of COVID-19 here yet, media people assembled before a tight row of officials, lined up almost shoulder to shoulder, in a cozy room across the street from Province House. By the Friday, March 20 briefing, social-distancing measures meant no reporters in the room—we could watch the webcast and phone in questions—and premier Stephen McNeil, chief medical officer of health Robert Strang and their various guest stars sat spaced away from each other. 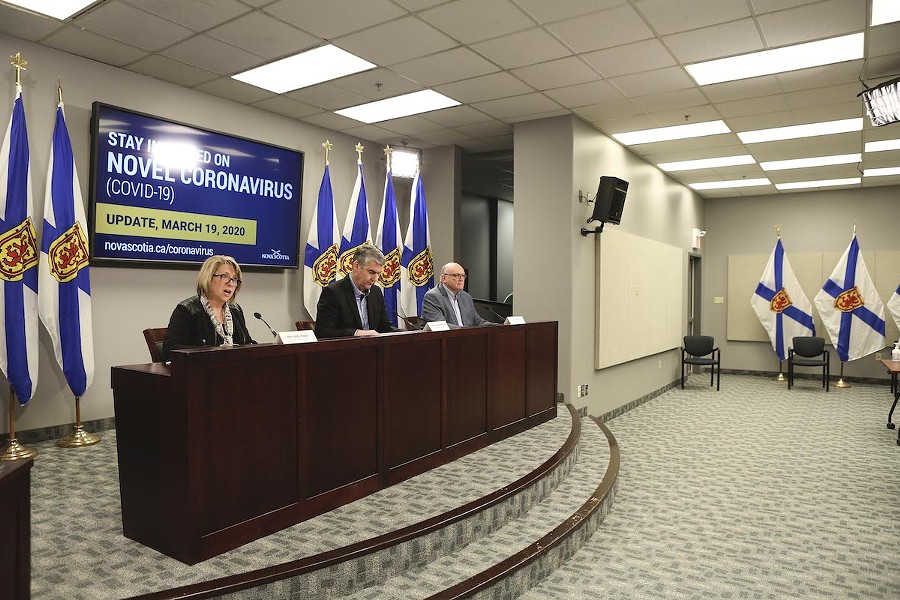 It already feels like a COVID cliche to say "things are changing quickly," and there’s too much information to feel you know exactly what is happening. (For example, during the writing of this recap on Saturday six new cases were announced.) Life in Halifax is affected by decisions at the city, provincial and federal government levels, which are happening at different times with their own webcasts, and not necessarily in coordination. Nova Scotians have definitely heard the message to batten down the hatches for a coming storm. Here are five other things we know about week one of Nova Scotia’s journey to the new normal.

It was a week of firsts

1 The province’s first cases of COVID-19 were announced Sunday March 15. The first time there was a patient who needed to be hospitalized was Thursday. We had the first school closures, the first mandatory business shut-downs, the first public health inspectors deployed to airports, the first social-distancing requirements, the first reductions in non-COVID hospital services, the first quarantines after travel, the first closing of the libraries. Each of these is news because it is new. Reality has changed. This takes some getting used to. But after that, modifications to the new reality seem easier to absorb.

Last weekend, the province also imposed the first gentle restrictions on assembling in large groups: "organizations and businesses must practise social distancing of two metres or six feet and keep gatherings below 150 or much smaller if possible." By Tuesday, the rule became much sterner in every way: "Effectively immediately, there are to be no gatherings of more than 50 people." Yet somehow it felt less severe. (Meanwhile, American idiot Donald Trump was talking about a limit on groups bigger than 10, a number he apparently pulled out of his ass.)

2Public transit is a germaphobe’s nightmare at the best of times. So far during the coronavirus end times, Halifax Transit hasn’t stopped the bus service, but things aren’t exactly normal. On Wednesday buses and ferries stopped collecting fares—going free to cut down on driver-rider interactions, bunching at the door, things needing to be touched and all the other inconveniences associated with paying for stuff. Compared to that, other changes that came out during the week aren’t very radical: Ferries are limited to 50 people per sailing, the first seat behind the bus driver is not allowed to be used and, starting this coming Monday March 23, a bunch of routes are either cancelled or on reduced service.

Even the NSLC has been affected

3 Because this is Nova Scotia, some of the most panic-inducing rumours circulating about food shortages, business closures and the coronavirus crisis at the beginning of the week involved the NSLC shutting down.

Since we now have a few presumptive cases confirmed, folks have moved on to spreading even more heinous rumours like the NSLC closing.

At The Coast we looked into these rumours, and were told by NSLC spokesperson Bev Ware they weren’t true: "all of our stores are open regular hours for now." The liquor corporation had taken some precautions against virus spread, including banning all business travel outside of Nova Scotia, and not letting people from outside the province visit head office. "We have also stopped in-store tastings and informed all employees that if they have a cough or fever they must stay home," Ware said. Otherwise stores weren’t affected in any way. That was Monday. But things, as they say, are changing quickly.

Tuesday brought reduced store hours (11am-7pm Mon-Sat, with an hour from 10-11am just for seniors, closed Sundays) and a limit of 50 people in a store at once. A press release about the new hours explained the changes are about coronavirus hygiene, not Corona supplies: "These shorter business hours will allow time for employees to thoroughly clean our stores and to re-stock product on stores shelves. The NSLC has sufficient inventory, so there is no need to buy extra product."

Thursday things changed again, when the NSLC tweeted "We encourage customers to pay with debit or credit cards whenever possible." The Coast would rather see the NSLC take Halifax Transit’s approach to avoiding the virus-spreading potential of cash, and simply do away with collecting payment. This would be very much in the interest of public health because alcohol is a wonderful disinfectant, as Steinhart Distillery reminded us.

Contaminated cash is not the problem

4 It’s not just the liquor store and the buses that started to get concerned about dirty money this week. At the Friday briefing, a reporter who called in said she was seeing a lot of businesses in Cape Breton posting signs to say they prefer credit or debit cards to cash, and she asked Strang if this was an official government recommendation. Strang said there is no warning about cash, pointing out that "there’s still hands involved" with cards, and besides, not everyone has the means to get a credit or even debit card: "We’re trying to make sure that parts of our communities aren’t left behind and further marginalized and made more vulnerable by some of our measures."

We are still aiming for a flat curve

5 California got its first COVID-19 cases on January 26. On Thursday March 19, facing 675 cases and 16 deaths, the state became the first in the US to go into lockdown. That’s 53 days from disease discovery to massive public containment efforts.

“We’re going to keep the grocery stores open,” is how California governor Gavin Newsome described the lockdown. “We’re going to make sure that you’re getting critical medical supplies. You can still take your kids outside, practicing common sense and social distancing. You can still walk your dog, you can still pick up food at one of our distribution centres, at a restaurant, at a drive-through—all those things we will still be able to do.”

Nova Scotia’s first diagnosed cases were announced on Sunday, March 15. Containment efforts had started the Friday before, and ramped up quickly. By Thursday the 19th, the province had settled into exactly the sort of lockdown that Newsom describes, with working from home and restaurants only doing take-out and encouragement from Strang to get outside (while maintaining social distance). In other words, at most Nova Scotia was four days from disease discovery to massive public containment efforts. A 49-day head start on California’s experience.

Nova Scotia is also ahead of much of Canada, as the last province to see cases and among the fastest-acting to shut the economy down. Under McNeil and Strang’s leadership, the province got ahead of the curve, and it seems determined to use the time it’s saved to keep the infection curve from spiking.

In the COVID context, "flattening the curve" is statistics-speak for not overloading the health-care system. If your hospital can treat 100 patients in a day, and you get 50 patients every day for a week, you treated (7 days times 50 patients equals) 350 patients that week, you were only operating at half capacity and everybody’s happy. But if you get those same 350 patients all in one day and no patients for the rest of the week, nobody's happy: 250 people can't get treated at all, and the hospital’s so stressed by the overload that it might not be able to care well for the 100 patients it’s supposed to be able to handle.


The scenario with a lot of people needing help at once is the sort of spike we are trying to avoid, getting a slow and steady stream of patients instead. Zoom happy hours and webcast press conferences and not going to see your grandmother when she gets back from Florida because she needs a two-week quarantine, as McNeil put it at one of last week's press conferences, are the things we need to do in order to take advantage of the time we’ve earned by taking COVID seriously, quickly.

Unfortunately, the lockdown approach to a flat infection curve brings with it a flat economy: Businesses shut, workers at home, trade slowing down. After a week of briefings devoted to the infection curve—restrictions and closings and the importance of washing your hands—a large part of the Friday March 20 briefing was devoted to helping business. Business minister Geoff MacLellan was the special guest with McNeil and Strang.

MacLellan talked about the "rapid response team" he put together to figure out how to help small and medium-sized businesses. The province is committing $161 million towards giving business cash flow and credit to get through the COVID crisis. There’s also $15 million to improve internet access in Nova Scotia (to deal with the spike of so many workers suddenly telecommuting), and student loan payments are suspended until October.

What the economy looks like in October is a question we’ll be answering in the weeks ahead.