"I know this is bad, but you’ve got this"

Nova Scotia’s head cheerleader has some mat talk as we settle into the siege. 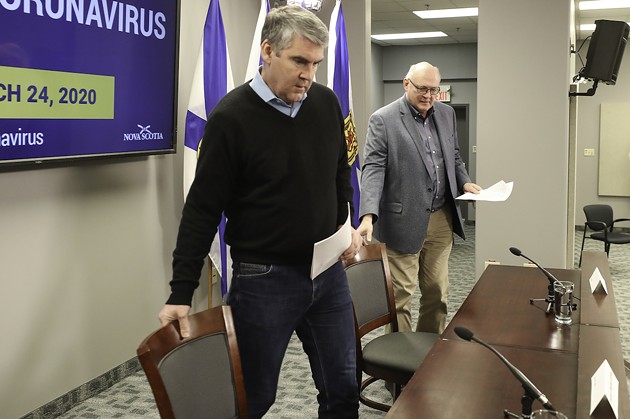 And now we wait. After a grumpy premier Stephen McNeil had to turn this car around on Sunday, Monday dawned with Nova Scotia in a state of emergency, and with Nova Scotians hunkered down for a protracted siege. As a signal of the new attitude, Bishop’s Cellar liquor store announced a two-week shutdown: "We tried hard to keep our business open for pick up and delivery, but we understand that this next phase of Nova Scotia’s response to COVID-19 requires a fundamental shift."

Even the weather seemed to get the message, with Tuesday’s snowy rainy frozen mess being perfectly uninviting—even if you had someplace to go. But most of us don’t. That’s the point of locking down as much of society as possible. We stop working, stop buying, stop studying, stop striving, stop doing, all to stop the virus. Premier McNeil adopted this plan before COVID-19 took hold here, and Nova Scotians bought in. Seeing the outbreak’s toll in other parts of the world, we decided to go on hiatus, trading our lives of ordered responsibility for the limbo described by a provincial ad about cannabis use: What time is it? What time is it? What time is it? What is time?

"We will get more cases, we can expect we will soon see community spread." tweet this

Media organizations are going into suspended animation, too. The Coast will not be publishing a newspaper tomorrow or any Thursday in the foreseeable future—a desperate move that got mentioned in The New York Times—in order to focus our limited resources on Halifax in the time of COVID-19 online here at thecoast.ca.

The Chronicle Herald’s parent company announced its plan to close and merge newspapers throughout Atlantic Canada for at least the next three months. "As a result of the operational changes, we have no choice but to make the very difficult and painful decision to temporarily layoff nearly 40 percent of our workforce," president Mark Lever wrote, effective today. Even taxpayer-funded CBC  announced cuts to get rid of some local TV newscasts in favour of the national news, before walking some of those cuts back today.

For journalists who are still working—practising self-isolation and social distancing while covering this "Biggest of Stories" as the Times put it—the rhythm of official briefings has become the pulse of the news cycle. But in Nova Scotia, even that pulse feels like it has settled in for the long haul. Where last week’s briefings broke news and featured various cabinet ministers, through Wednesday this week only McNeil and chief medical officer of health Robert Strang have appeared, with the province’s lead communicator Tina Thibeau moderating calls from reporters.

Call it The Steve & Strang Show, webcast live every day at 3pm. Or, like, whenever on the government's YouTube channel. In this forum, the doctor and the politician have become Nova Scotia’s pandemic duo. They inform and reassure, get mad and even joke around.

On Tuesday (yeah, just yesterday), premier McNeil was answering a question about exactly what services and businesses are deemed essential. He mentioned power, IT and telecommunications, then tried to refer to the health measures Strang has put in place, but he had a slip of the tongue.

"What we have said is they continue to operate, and manufacturing continue to operate, providing you follow the health protocols that premier—That premier?" McNeil caught himself, then went with it, breaking from the question to address his COVID-fighting partner. "Yesterday I called you 'Doctor Strange' and today I'm calling you the premier, so we're all set. We're good.

"I don't think you're strange by the way," McNeil continued. "I’m gonna start calling you 'the good doctor.'"

"And I don't want to be the premier either," Strang chipped in, as they both laughed before getting back to business.

At the Sunday briefing announcing the state of emergency, McNeil played bad cop. This week he’s softened. He gave mat talk like a cheerleader on Monday: "To the families and children are forced to stay inside: I know this is hard, but you've got this. To our seniors, many of whom are home alone and can't see their grandchildren or get that hug: Hold tight. Know that you are loved. And we want to keep you safe."

Tuesday, wearing jeans and a v-neck sweater, he reported on a call he had with other premiers and the prime minister. McNeil assured his citizens that he advocated for Nova Scotian manufacturers to contribute to the national "war effort" against the coronavirus, as well as pointing out the "uniqueness of our economy and the small business piece in it" in terms of getting financial supports flowing.

Wednesday he was back in a blazer but still being a booster. A journalist called in to say they were getting reports of stores raising prices on essential items, which is illegal under section 16 of the Emergency Management Act. McNeil turned it into an opportunity to praise local businesses. "I have not heard of any situation of price gouging," he said. "That has not been something that has been brought to our attention at all. As a matter of fact, retailers across the province and grocery stores have been beyond belief." So strong is his faith in the community, McNeil invites Nova Scotians who encounter price gouging to contact his office (try 902-424-6600 or premier@novascotia.ca), "and we'll do the inquiring for them."

Strang, meanwhile, has remained almost exclusively blunt and science-based so far this week. His straightforward delivery is strangely comforting when he gives the news about the rising number of cases—68 as of Wednesday, including a child under 10, two of the cases getting serious enough to require hospitalization.

This caseload seems relatively low in Canada. Quebec jumped from about 200 on the weekend to over 1,300 by Wednesday, the most of the nations’s 3,000+ cases. Plus all of Nova Scotia’s cases have been related to travel, no diagnosed community spread yet. Strang reported that the testing lab’s capacity doubling this week to around 400 tests per day, enabling the province’s approach to become more aggressive. Before, if people had worrisome COVID-adjacent contacts, they were told to isolate for 14 days to see if symptoms developed. Now they get tested right away, giving us a more current picture of disease spread.

But Strang keeps beating his drum that none of this should leave room for complacency or relaxing the social shutdown. "We will get more cases, we can expect we will soon see community spread." A state of emergency declaration lasts two weeks, but it can be renewed, and Strang has started getting more explicit about the siege Nova Scotia is in for against the disease. "The first wave is six to eight, maybe a little bit more weeks, and then we still are not out of the woods and we have to continue to pay perfect, close attention to this for quite a long time."

Most of the province is dancing (in a socially distanced, self-isolated way) to Strang’s tune. But because people can be lying jerks, at the Tuesday briefing the good doctor had to play bad cop. "It’s unfortunate that I have to say this, but we have had cases of people calling 911—and at least one circumstance somebody coming into a hospital—where they have not been truthful about their travel history."

It seems some people returning to Nova Scotia are not up to speed on the situation here, despite advisors at the airports and checks at the New Brunswick highway border and the general feeling of zombie apocalypse everywhere. Or they’re up to speed, and correctly realize they will be treated as high risks of COVID-19 even if their health complaint has nothing to do with fever and new cough. Whatever the reason, they aren’t being forthcoming. And Strang doesn’t like it.

"If you're concerned about COVID and COVID testing, use the 811 online assessment tool and if necessary call 811. You should only call 911 if it's an emergency health issue. And if you do call 911, it's critically important that you're truthful about your travel history," he said Tuesday, his voice rising from blunt to stern. "If you do not tell the truth about travel history, we cannot be alerted about the potential for COVID-19, and you're quite frankly putting other people—especially our health-care workers who are very vulnerable and working extremely hard—you’re putting them at risk."


At the Wednesday briefing, however, he brought gratitude: "I want to thank Nova Scotians who are adhering to the requirements around self-isolation." Our plans and systems are being tested by the snowbirds and March Breakers returning to the province this week, and so far things are holding up well. "What we're doing is working. It is minimizing the potential for the spread of COVID out in our communities."

To this point, each person with the disease in Nova Scotia has passed it on to just-under two other people on average. That's a welcome statistic considering a funeral in St. John's was a super spreader event leading to 44 cases in Newfoundland and Labrador.

"We are among the lucky provinces where community spread has not happened, but let's not kid ourselves. It could, just about any time," McNeil said at the end of Wednesday's briefing. "We must continue to follow the good doctor's advice."