Just the news on COVID-19 in Nova Scotia, for the week starting July 6

The coronavirus takes the whole weekend off 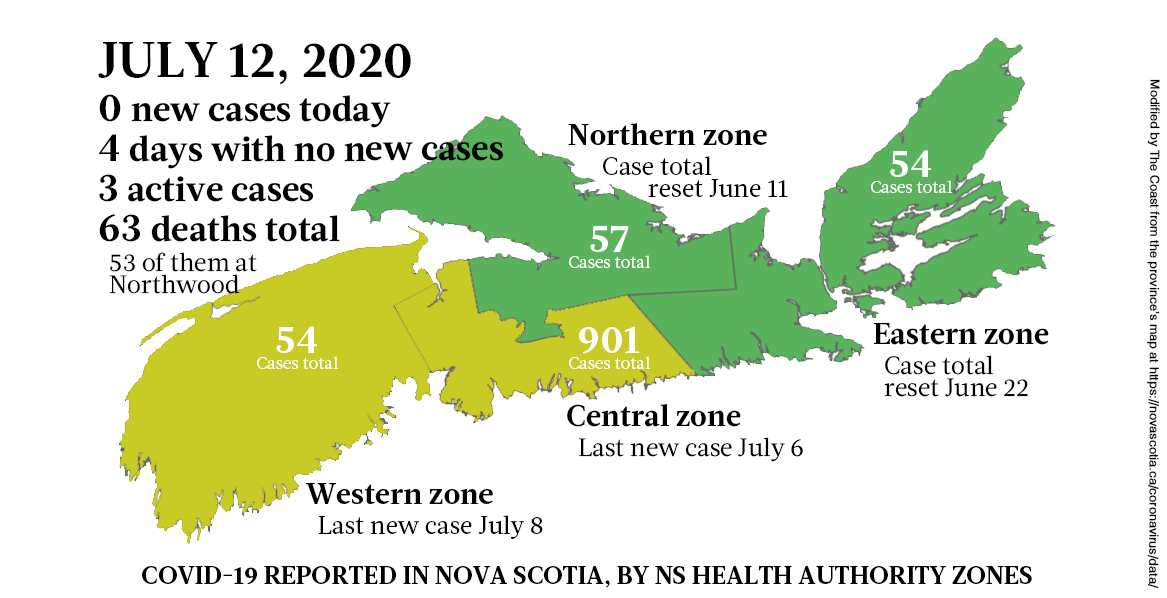 And with Sunday’s clean report from the province, we’ve got a whole weekend free of new C19 cases. There are now just three patients with active cases in Nova Scotia, none of them in long-term care facilities or related to community spread. We haven't had a new case for four days straight.

COVID-19 takes a break on the weekend’s first day 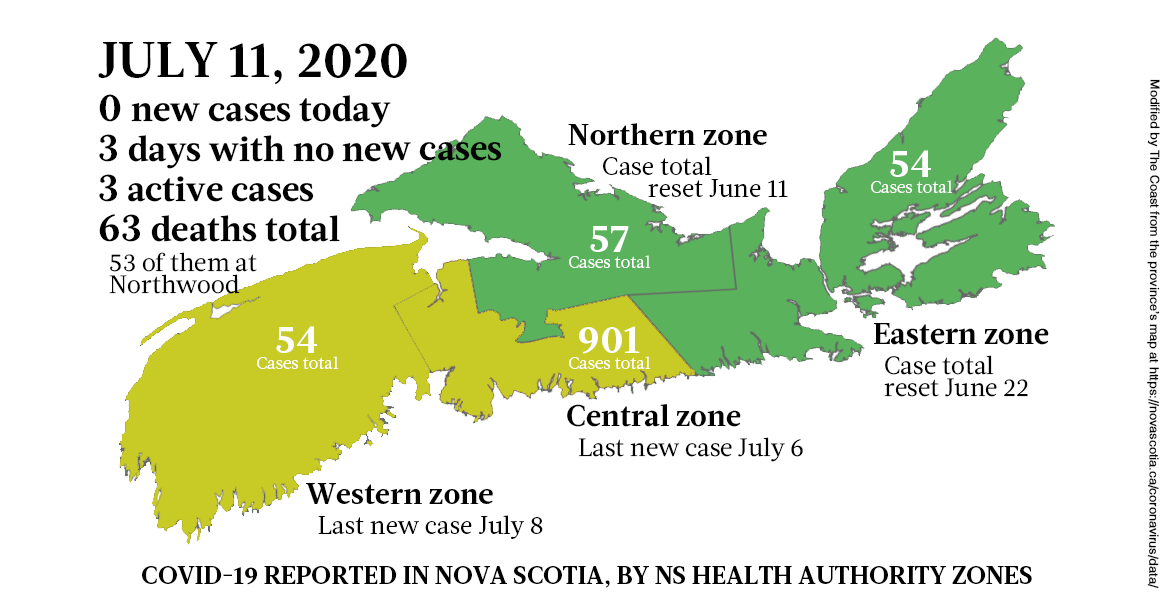 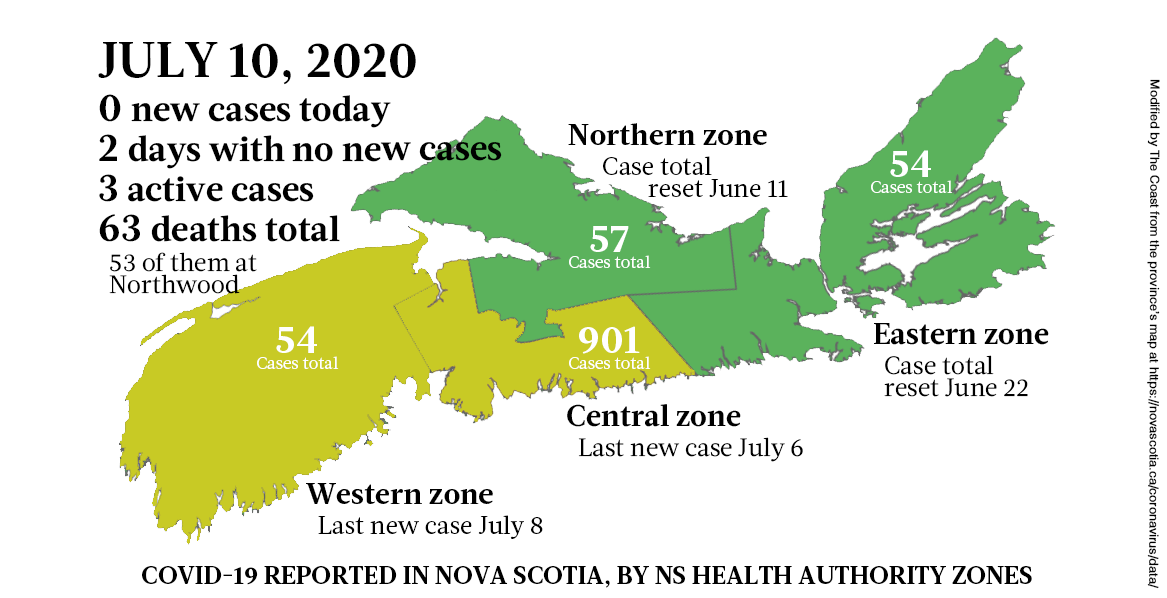 Key info from today’s provincial C19 report: No new cases, one patient recovered from the disease. That leaves Nova Scotia with three active cases, and the milestone of getting resolution for 1,000 COVID-19 cases. Out of those thousand, 63 patients died, while 927 people are considered safely recovered from their infection.

Premier Stephen McNeil’s government has also decided to extend the state of emergency for another two weeks, so instead of ending this Sunday it will continue to Sunday, July 26. Unless extended or cancelled. Nova Scotia was the last province to declare some variety of emergency when it decided to start one March 22, and since then it has been extended every two weeks. Today’s extension will take us through four months straight of living in a state of emergency. 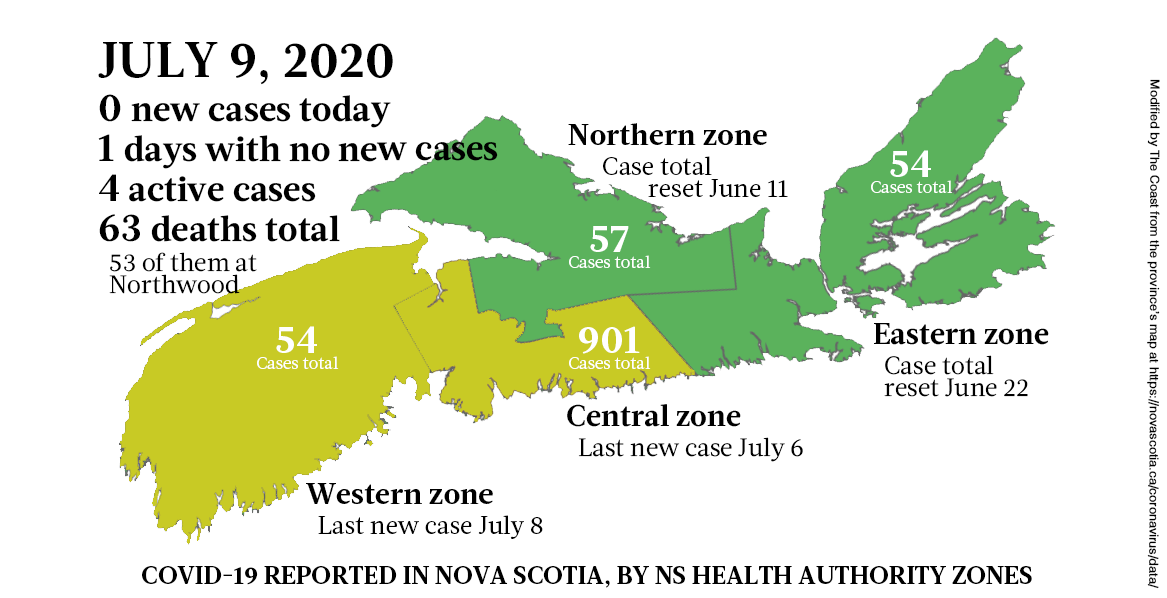 There are no new cases today and thanks to someone recovering, the number of active cases dropped by one according to the province’s C19 report. That’s a good day. As per the government’s custom to keep some information away from the public, the report does not say which health zone the recovered patient lives in. Since last Tuesday, June 30, there have been five cases diagnosed in Nova Scotia, three in the Central zone, two Western. 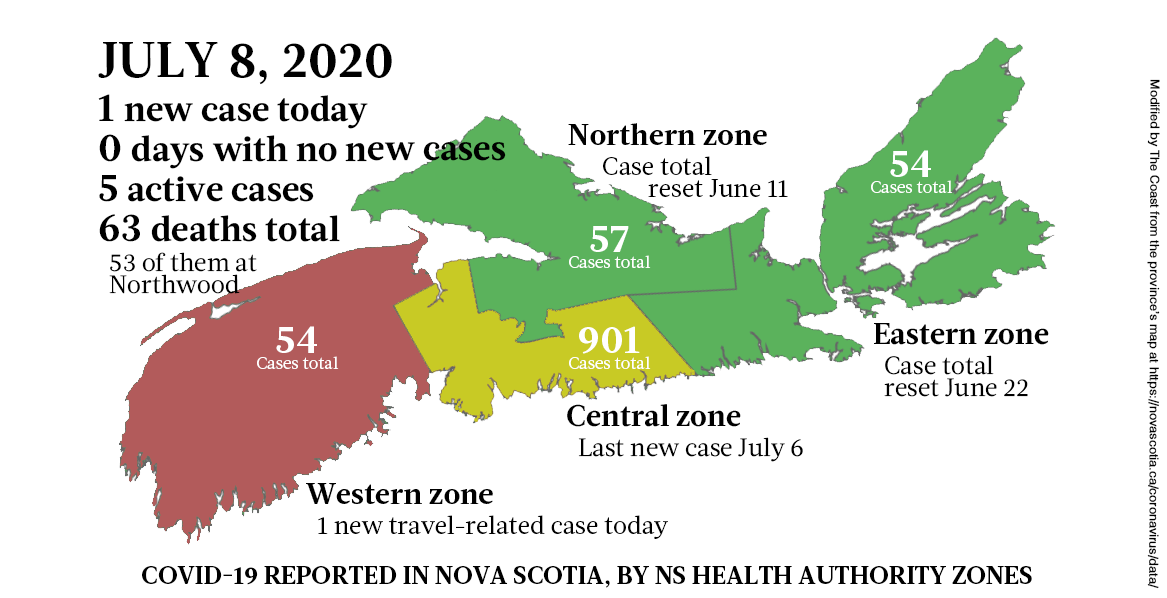 The province is reporting that Nova Scotia now has five active COVID-19 cases, with the diagnosis of someone in the Western health zone. “The new case is a Nova Scotia truck driver who travelled outside Canada as an essential worker,” says the government’s press release, the clear implication being this person picked up the disease on work-related travel.

Yesterday’s big revelation, that some guy with COVID-19 didn’t bother going into quarantine after flying to Halifax, was indeed revealing. That guy didn’t just expose people to the disease; he also exposed the province as a hopeless COVID-19 ingenue. (For all the country bumpkins out there—apparently a large population in positions of leadership in Nova Scotia—that’s a fancy French word for “country bumpkin.”) But the province is naive no more!

Nearly four months into the provincial pandemic response, today there’s finally a form up on the province’s site that visitors from outside the Atlantic bubble have to fill out. That way, the government has a phone number and address it can use to make sure people travelling here from beyond the east coast actually self-isolate for the mandatory 14 days.

Nova Scotia’s sophisticated cousins New Brunswick and Prince Edward Island may have had such a form “for quite some time” as premier Stephen McNeil put it. But it was apparently only after catching a guy breaking the strongly worded rule that the government realized people can lie, or may disregard authority or sometimes fail to full appreciate the importance of a strongly worded rule. Then the province went into high gear “urgently working on implementing a tracking system,” in the words of head public health doctor Robert Strang.

Oh well, as pathetically innocent as this episode made us look, at least we have the form now. Plus a strict surveillance protocol: Public health is going to call each visitor every day for the two weeks to make sure they’re actually in quarantine. That’s a relief. Because as everybody knows, phone cords are not very long, making it impossible to both answer the public health call and be out in public. Thanks, The Province, for finally getting wise to the ways of the world. 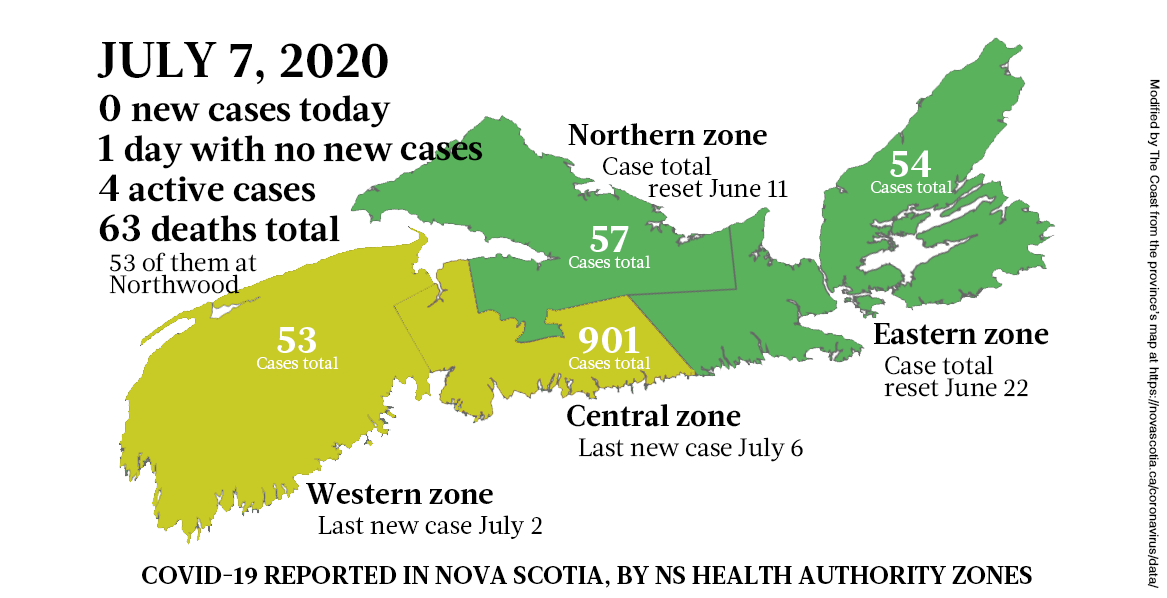 After yesterday’s unusual case, the province is back on familiar ground today with a report of no new COVID-19 cases. The four cases that were sporadically announced over the last few days remain active, but nobody new tested positive.

In more good news, now that two full 14-day incubation cycles have passed without a case at the Northwood retirement home, the province has declared victory. “As of Monday, July 6, the COVID-19 outbreak at Northwood's Halifax campus is considered resolved after completing 28 days with no active cases,” says the press release.

As we’ve talked about before, going one incubation period—14 days—without a single case is comforting, but it’s really the two-cycle, 28-day no-case time that public health officials want to see before they’re comfortable saying the disease is gone.

Mad Dad McNeil and the case of the Green Gables Yankee 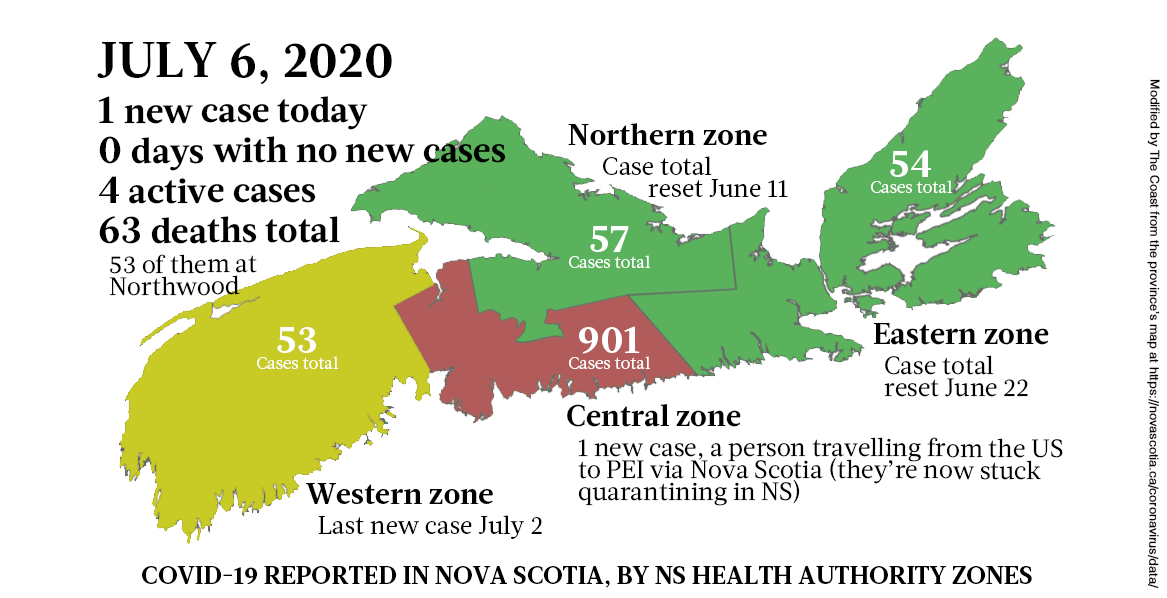 The province is reporting a new COVID-19 diagnosis today, but it’s a weird one. Per the official press release: “The new case is related to travel outside Canada. The individual does not reside in Nova Scotia but was passing through from the United States to Prince Edward Island. As they are still within the 14-day isolation period required by the federal Quarantine Act, they are now being quarantined under federal authority in Nova Scotia.”

There are so many questions, first one being WTF?

People don’t pass through Nova Scotia on the way to PEI unless they’re flying. But a flight from the US can’t land in Halifax—Stanfield International is not on the list of four airports allowing international flights. So what is happened here? On the day this person was flying from the US to PEI, did they evade COVID screeners when landing in Toronto or Montreal or Calgary, but were somehow tested, diagnosed and detained in the departure lounge in Halifax before their flight to Charlottetown left?

Or is “passing through” a deliberate stretching of the facts to make it sound like Nova Scotia had only incidental contact with this person, when the truth is they were hanging out here for more than a week?

The correct answer is the stretching facts one.

Today Nova Scotia put together a press conference to talk about the case, but our whole tiny office missed the email invite because we’re busy working on a special print (yes, print!) edition of The Coast’s Hot Summer Guide that comes out Thursday. CBC, however, was there and has a story explaining the situation

According to CBC, it would seem a guy in his 20s flew into Toronto with a student visa to study in PEI, then he flew to Halifax. At some point during his time in Nova Scotia, PEI refused to allow him to go there because of a paperwork problem. So he just chilled in Nova Scotia from Sunday, June 26 though last Saturday, July 4, not bothering to go into self-isolation, instead meeting with people from PEI and managing to seed a new batch of infections there before being diagnosed. After a positive COCID diagnosis yesterday, the feds put him into quarantine.

You’re doubtless wondering, how mad was Mad Dad McNeil? So steaming mad that now travellers have to fill out a form with their self-isolation address and phone number! And they’ll get a phone call from public health every day for their two-week quarantine! And they’d better answer that call whether they’re staying the blazes home or not, because if they don’t answer three calls in a row, the police will go check on them in person!

Now you’re thinking: How can this be new that people coming here have to fill out a form? Also: You mean we didn’t check up on these people before? Plus: mobile phones. WTF?

Long lines at the various border crossings remains the story of the Atlantic bubble’s first few days. Apparently there some pent-up demand for people to travel inter-provincially.

After waiting months to get out of town, waiting a few hours at the border isn’t really that big a deal. Especially when the delays are related to the COVID-19 screening each province does in hopes the disease won’t be spreading while the people do. COVID safety is absolutely the most impor—oh, umm, looks like sometimes road safety concerns can trump pandemic concerns, as when Nova Scotia just started waving people through the border to clear the traffic jam. But except for those times one province decides to drop all screening and let absolutely anyone through without question, mutual C19 safety is the highest priority among the four Atlantic bubble partners.

The collection of news updates from the June 29 week is here.