Just the news on COVID-19 in Nova Scotia, for the week starting July 13 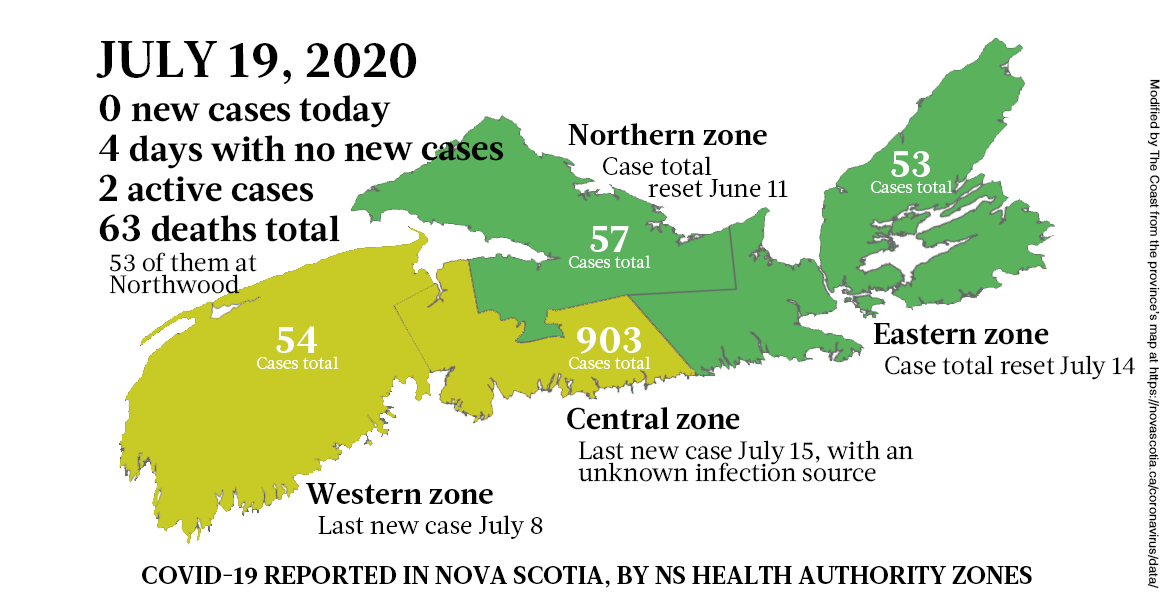 For the fourth day in a row, nobody has been newly diagnosed with COVID-19 according to the province's daily report. That's a good finish to this week.

No cases to report 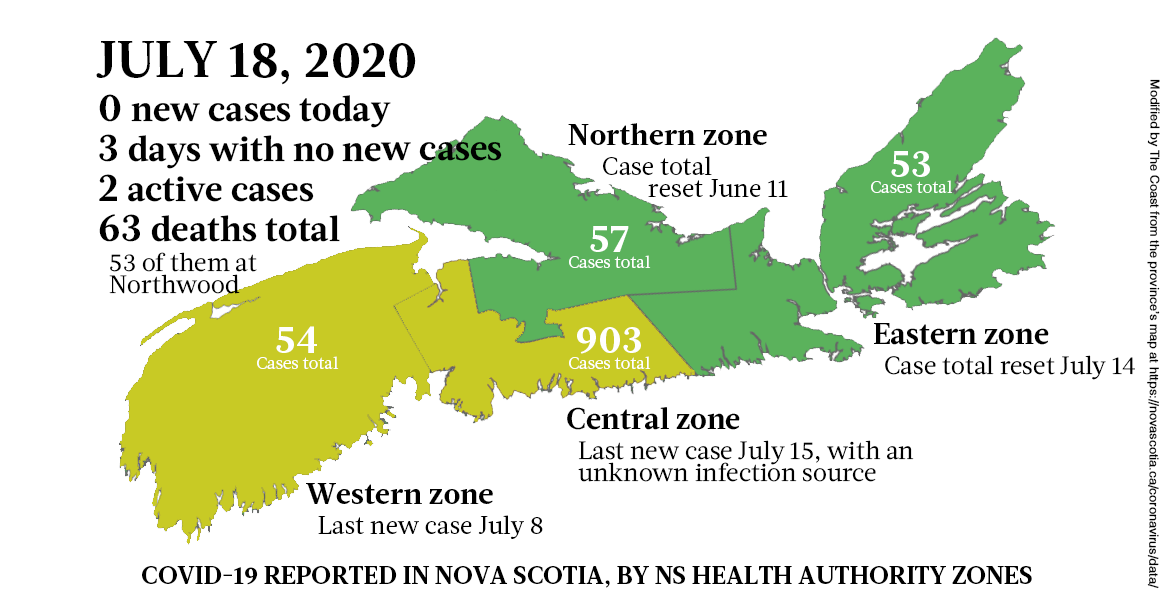 The weekend starts case-free according to Nova Scotia’s official COVID-19 report. The province has now gone without a new case for three straight days, which means if your weekend actually started on Thursday, it still got off to a caseless start. 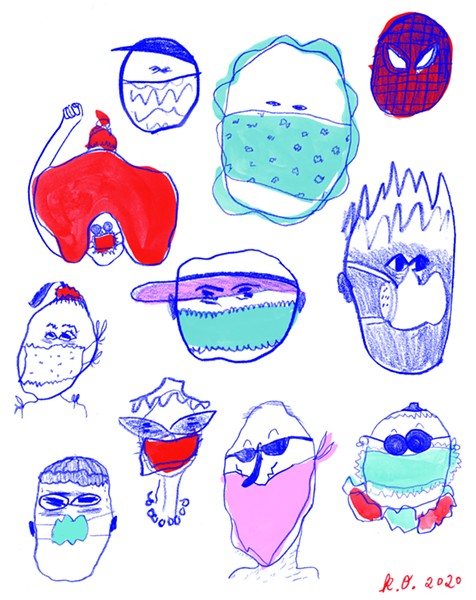 In more Friday mask happenings—see below for the new rule about transit and taxi masks—the Nova Scotia Health Authority announced that all hospitals will require patients and visitors to wear masks starting Tuesday, July 21. “As we plan for a potential second wave, we want to ensure a consistent approach across all hospitals and health centres in the province,” said Krista Jangaard, the IWK Health Centre’s chief executive officer, in the NSHA’s press release.

As on transit, children under two year old don’t have to wear masks. Neither do inpatients, or hospital staff working in “non-clinical areas.”

While announcing this pro-mask change, the NSHA gave a reminder that masks aren’t the be all and end all. “We must also stress that masks are not a replacement for physical distancing,” said Central health zone’s chief of infectious diseases, Shelly McNeil. “Physical distancing and good hand hygiene are the most effective ways to minimize the risk of spreading COVID-19 and must continue to be practiced while in our facilities.”

Loosening up at nursing homes, masking up on transit

It’s been a while since premier Stephen McNeil and top doc Robert Strang did an episode of The Steve & Strang Show, their official webcast about the coronavirus in Nova Scotia. But today the show went on—you can catch the rerun here—because the guys had two pieces of news to deliver: 1. Restrictions on visitors and socializing at long-term care facilities are relaxing, and 2. Masks will be mandatory on public transit and in taxis.

The changes at nursing homes go into effect next Wednesday, July 22. Each facility can decide for itself what new rules to adopt. Here’s exactly what’s happening, copied straight from the horse’s mouth that is a provincial press release:

— both indoor and outdoor visits will be allowed with limited numbers of visitors and scheduled appointments. Residents and visitors must wear masks and observe physical distancing, except for limited physical contact like a hug

— residents and staff can gather in groups of 10 or less for dining, recreation or socializing without physical distancing. Groups should remain consistent and visitors cannot join

— sightseeing bus trips for groups of up to 10 people (including residents, staff and driver) are allowed. Residents and staff cannot get off the bus and thorough cleaning before and after each trip is required

As for mandatory masks on transit and taxis, that rule goes into effect a week from today, Friday, July 24, and it’s pretty much self-explanatory. Drivers and passengers have to wear masks, the only exceptions being kids under two years old and people with a valid medical reason to not wear a mask. Ideally you bring your own, although the province will be helping public transit agencies provide back-up supplies.

Again, so you can see the words coming straight from the province and understand how little wiggle room there is on this, here’s how today’s official news release describes the change around masks:

Starting July 24, it will be mandatory for drivers and passengers to wear a non-medical mask on public transportation. Children under two and people with a valid medical reason for not wearing a mask are exempt. Passengers are asked to use their own masks as much as possible. Government will help public transportation services with supplies of masks for people who can't bring their own.

Note how "public transit" is defined to include "private taxis" as if the words public and private were somehow kissing cousins rather than arch enemies. Ahh language, so darn malleable. At least with this new rule, nobody can see us 😬behind 😷. 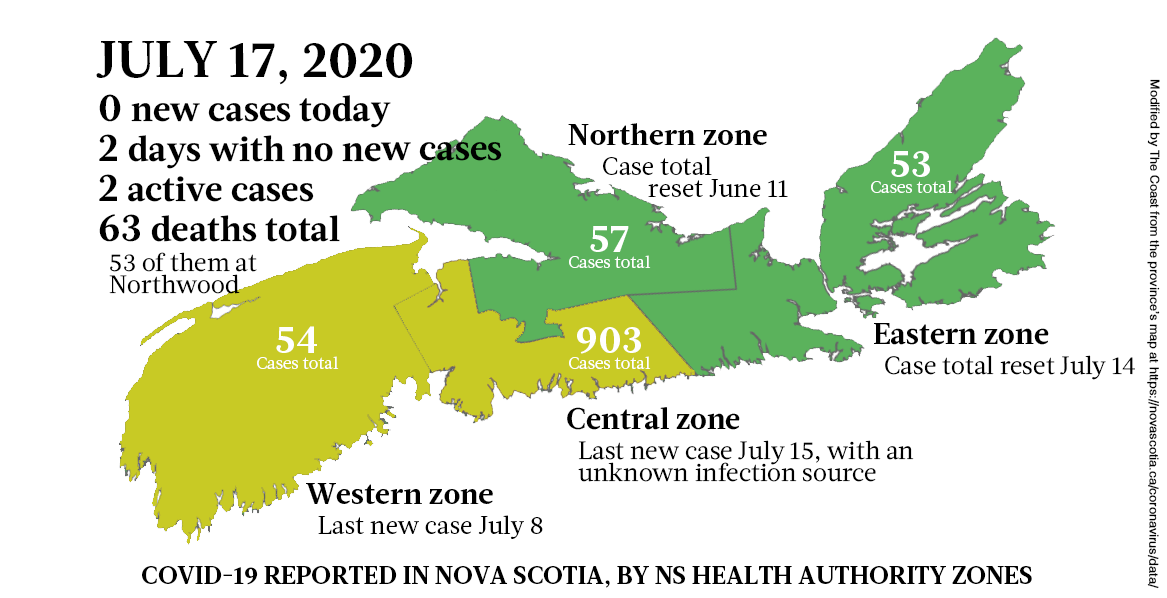 The province’s daily COVID-19 report doesn’t have much going on today. There are no new cases diagnosed. There are still two active cases. There’s no word on if Wednesday’s case has been ruled community spread. And that’s all.

The threat of community spread

Today’s provincial report is great and all—no new COVID-19 cases—but let’s talk about yesterday. Several Coast readers have gotten in touch, hoping we’ve got inside information about Wednesday’s new case, which the province said it didn’t know the source of so it “remains under investigation by Public Health.” Sadly we’ve got no info, and we’re just as concerned as our readers, fearing that without a travel connection or relation to another known case, this marks the return of the dreaded community spread.

In an unnerving move, the report the province issued today doesn’t say one word about the new case, not even to reassure the public that it hasn’t been forgotten about. So we got in touch with the province and were told “The source of yesterday’s positive case remains under investigation.”

Assuming this patient, who is currently in hospital, didn’t forget about a recent trip through the southern United States, and assuming the public health investigators would figure out if they lived with one of the few people who’ve been diagnosed with C19 lately, community spread is definitely an option here. And the province’s desire to exhaust all investigative options to prove it is both understandable and precedented. Public health head Robert Strang doesn’t want to sound the community spread alarm unless there’s good reason.

The first time community spread raised its head during the pandemic in Nova Scotia was Thursday, March 26. That day, the province reported five new cases: “Most are travel-related or connected to earlier cases. One of the new cases cannot currently be linked to travel or an earlier case. The investigation to determine the source of the exposure and whether any others may have been exposed is ongoing. At this point, public health cannot confirm that this case is linked to community spread.”

It wasn’t until four days later Strang threw in the towel. From the Monday, March 30 report: “While most cases to date have been connected to travel or a known case, public health has now reached a point with one of its current investigations where no such links can be made and must conclude that this case is the result of transmission within the community.”

Back then, in the early weeks of our virus response, the province’s advice for avoiding further community spread of the disease included “limit essential gatherings to no more than five people and stay at home as much as possible.” It was April 3 that premier Stephen McNeil told us to “stay the blazes home.” And when community spread eventually stopped, the lockdown could loosen.

Now the rules around gatherings have been relaxed to allow intimate groups of 10 and public groups of 250 people outdoors with physical distancing; bars and restaurants are open; and east coasters in the Atlantic bubble can come and go from Nova Scotia without quarantining for two weeks. Community has returned. Here’s hoping community spread has not returned with it.

We have a new case

The streak couldn’t last, and it didn’t. After six case-free days, the province is reporting a new case of COVID-19 has been diagnosed. In its email to media is this ominous line: “The source of infection for this new case, which is in Central Zone, remains under investigation by Public Health and this individual is in hospital.”

That’s a far cry from our last new case before this one, a week ago today, which was described as “a Nova Scotia truck driver who travelled outside Canada as an essential worker.” The big fear is community spread, when a case isn't related to travel or contact with someone else who's known to have a case. We await further information from the investigation by doctor Strang’s team.

Down to one active case

The province is reporting no new C19 cases and two patients successfully recovered (i.e. they didn't die). That leaves us with a single active case in Nova Scotia.

Where does that person live? Must be either the Western or Central NS Health Authority zone, because those are the only areas that have had cases since there were last no active cases. We’ve asked the province, and will let you know the answer. If/when they say some variation on “that’s private information,” we will wonder for the latest time why the public can’t be told that in some unspecified part of a huge region encompassing countless towns and communities, some anonymous person does indeed have this disease everybody is concerned about.

Speaking of information and health zones, today the province’s official map has slightly different numbers than yesterday (because the official map changes day to day leaving behind no record of the past, you’ll have to see below for our map based on yesterday’s official map). The Eastern zone lost a case to Central. We’ve asked the province about this, too. When the Panorama system first became “the gold standard” of COVID-19 tracking (top doc Robert Strang’s words), more than a month ago, cases moved around quite a bit as data got cleaned up. The last case shuffle happened June 22, when Central lost one to Eastern. Maybe Central just wanted its case back. 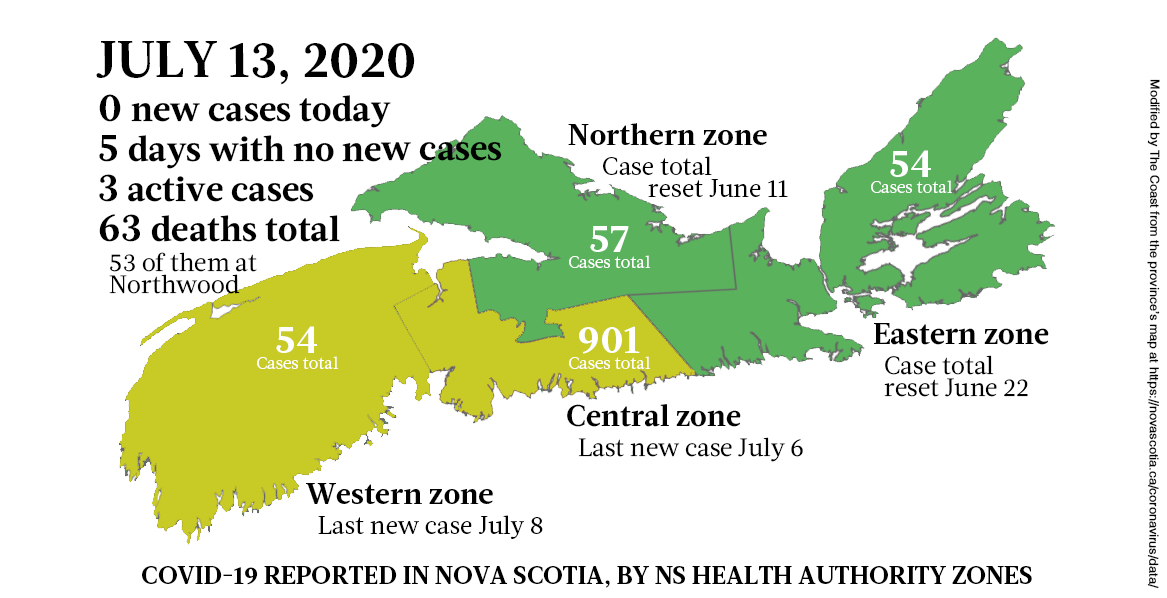 Starting the week right, the province’s daily COVID-19 report reported there are no new cases in need of reporting.

There are still three active cases in Nova Scotia. It was exactly two weeks ago—Monday, June 29—that we were last at zero active cases. Wednesday, July 8, there were five active cases, but two patients successfully recovered since then.

The week behind, the week ahead

There were only two new cases of COVID-19 diagnosed in Nova Scotia last week, and as of yesterday the province was down to just three people with active cases. For this week we'd like to see even fewer new cases (🤞) and those three patients all recovering smoothly (🤞🤞🤞).

The collection of news updates from the July 6 week is here.