Just the news on COVID-19 in Nova Scotia, for the week starting August 10 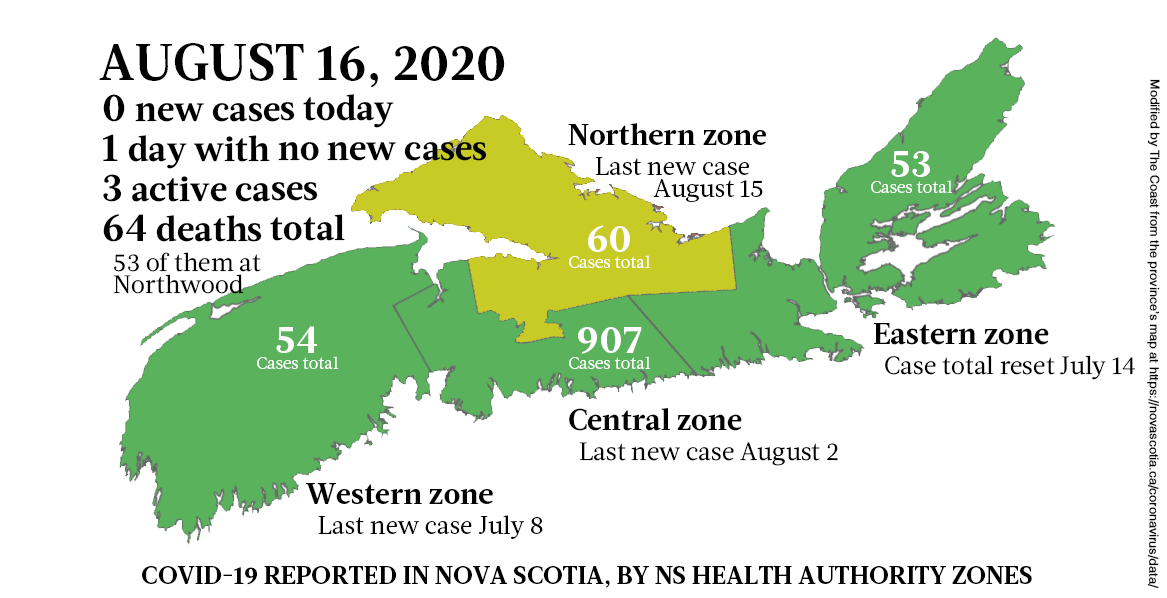 The Northern health zone’s threatened outbreak—three cases in the last couple of days—is a little less threatening today, with the province reporting no new COVID-19 cases. None of those three patients has yet recovered, but none are serious enough to be in the hospital, either.

While attention’s been focused on the Northern zone (Truro, Pictou, Stellarton, Parrsboro, Amherst, the New Brunswick border), the rest of the province has been quiet. Today the Central zone (Halifax and a wide around it) reached 14 days since its last case, a full incubation cycle for the coronavirus, so has been downgraded on our map from yellow to green. The Northern zone is not red, because it has no new cases today, but will remain yellow until it’s been clear for two weeks.

Here are the deets on each flight—a West Jet plane Saturday, August 8 and an Air Canada one that flew Tuesday, August 11—pasted straight from the NSHA’s advisory.

West Jet flight WS 248 on August 8 from Toronto to Halifax. It departed Toronto at 9 am and arrived in Halifax at 12:04 pm. Passengers in rows 11 to 15 seats DEF are more likely to have had close contact. Passengers in these seats are asked to call 811 for advice.

Air Canada flight AC 604 on August 11 from Toronto to Halifax. It departed Toronto at 8 am and landed in Halifax at 11:02 am in Halifax. Passengers in rows 19 to 23 seats ABC and rows 29 to 33 seats ABCD are more likely to have had close contact. Passengers in these seats are asked to call 811 for advice.

Note that if you were on either of these planes and sitting in the seats the NSHA is worried about, you need to call 811.

People on the West Jet flight get out of quarantine tomorrow, while the two-week quarantine for Air Canada passengers doesn’t end until Wednesday, August 26. 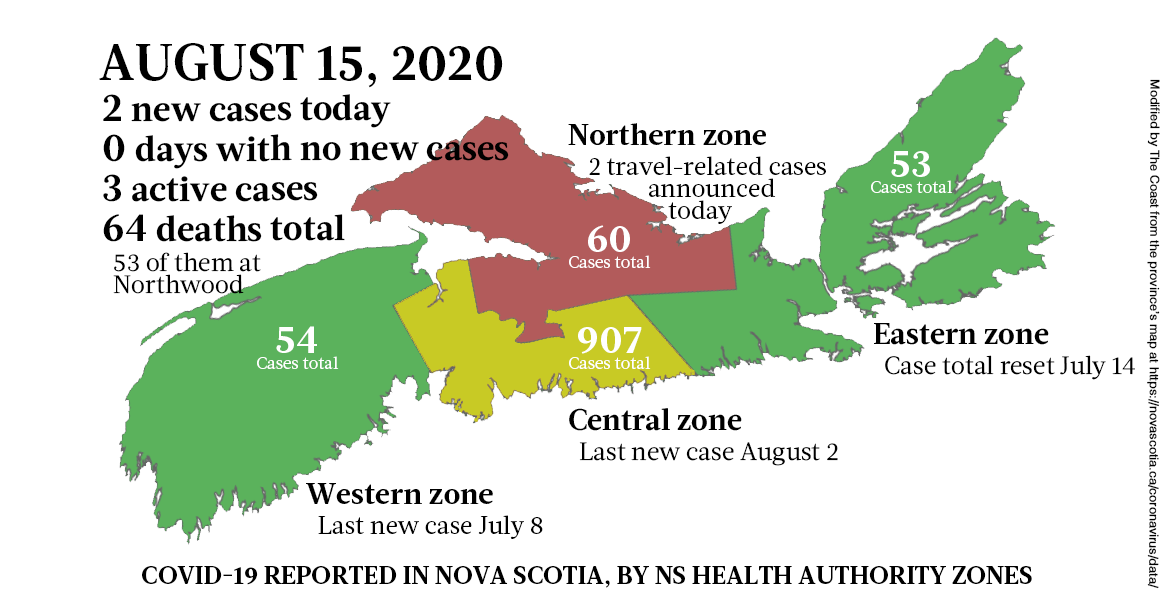 Uggh. Yesterday’s case is followed up by another two cases today. All of them are in the Nova Scotia Health Authority's Northern zone, and none of the three active patients are currently in the hospital.

There is a positive development in the province’s latest COVID-19 update. When the case was reported yesterday, its source was unknown, described as “under investigation by public health,” leading to speculation (see below) that it might be community spread. But Saturday's provincial report says that case turns out to be connected to travel, as are today’s cases: “The new cases are in the Northern Zone and are currently under investigation by Public Health. These new cases and the one announced Friday, Aug. 14 are all travel related.”

No indication if the three cases are related to each other, or if the travel was international, inter-provincial or within the Atlantic bubble. We’ve asked the province for clarification, and will let you know what we find out.

Getting masked to school

Nova Scotia public health head Robert Strang and provincial education minister Zach Churchill gave a COVID-19 briefing to update the plan to reopen schools. Although Churchill is considering running to take over for premier Stephen McNeil, who announced his retirement just last week, today’s appearance in front of the cameras wasn’t necessarily part of Churchill’s audition for the job. He and Strang appeared at a webcast without McNeil a few weeks ago (see Wednesday, July 22) to introduce the back to school plan, which has classes scheduled to start September 8, with class sizes the same as they were in the before times.

The biggest news from the update involves masks. When the plan first came out, masks weren’t a big part of it. All students had to wear non-medical masks on school buses, which was a natural outgrowth of Strang making masking on transit and in taxis mandatory in July. And high school staff and students were required, as the province put it, “to wear a mask in school spaces where social distancing is not possible, for example hallways and common areas. Students and staff do not have to wear a mask in class, unless they want to, or if they are working with a student whose individual program plan requires a mask be worn.”

But that was it.

Even though desks would only be spaced out as much as possible—not necessarily the two metres we keep hearing about as appropriate physical distance—under the plan’s basic full-opening protocol, masks weren’t mandatory. Announcing the plan back in July, Strang brushed this lack of distancing off. “Our goal is to have at least a metre space between desks,” he said. “And it's that first metre which is the most important metre.”

Fast forward to today, Strang and Churchill are singing a radically different tune. Now masks are mandatory at all times in schools from Grade 4 through Grade 12, unless students have room in common areas to be two metres apart. That mandatory mask wearing includes classrooms, except for when students are in their desks and if those desks are two metres apart AND the desks are facing the same direction.

Churchill says there are some small schools in the province where desks will be able to be two metres apart, and those students won’t have to mask up in class. However, it’s hard to imagine any school in Halifax with that much room and that few students; more likely is every public schooler in the city wearing a mask the whole day.

Besides the mask change, Churchill made a few other announcements to reassure Nova Scotian parents that schools will be safe. They are as follows, copied directly from the official news release:

— masks and hand sanitizers are starting to arrive at schools. All students and staff will receive two free cloth masks. Disposable masks will also be available if a student forgets or loses their mask during the school day

— Regional Centres for Education and the Conseil scolaire acadien provincial, will continue to communicate with families. Principals will also reach out to families with specific information about their school closer to September

— schools, with the support of public health, will notify families as soon as they become aware of a COVID-19 case in their school, along with what measures will need to be taken.

— resources for families and students are currently available at https://novascotia.ca/backtoschool with more to be added. 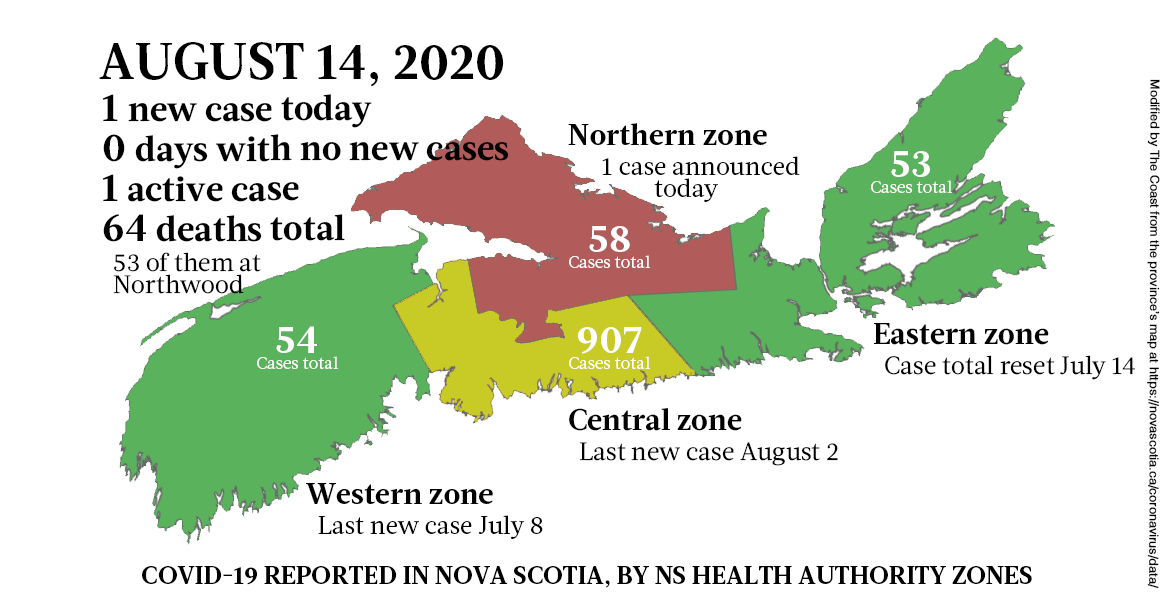 And after 11 days without a case, Nova Scotia’s streak breaks. Today the province is reporting that someone who lives in the Northern health zone has been diagnosed with COVID-19.

The province is saying practically nothing about the source of this infection. “The new case is in the Northern Zone and is currently under investigation by public health,” reads the email sent to media. Public health top doc Robert Strang appeared at a webcast C19 briefing today, and he didn’t add anything to the situation. “This case remains under investigation by public health,” Strang said, “and we’ll be able to share more information with you when that is available.”

This lack of telling tells us a couple things. For starters, this patient has not recently travelled outside the country or the Atlantic bubble. The province LOVES saying when a new case is travel-related—as if reinforcing the idea that only Nova Scotia is doing things right, and leaving the province is scary!

Next-best thing is when a new case is related to an old case. If the disease is going to spread, after all, better it spreads in a small circle of people. If the province could have reassured the public that today’s case stems from another patient, the province would have. But Nova Scotia hasn’t had an active case since last Sunday, and that person lives in the Central zone. Today’s Northern zone case cannot have an obvious connection, otherwise we’d already know about it.

As we’ve said here too many times to even bother linking to, the big fear is community spread. Strang doesn’t want to raise that alarm if he can possibly avoid it, so public health’s investigation is focused on contact tracing the patient’s recent movements and interactions in hopes of finding a non-obvious connection to another case. That has taken several days in the past, either to discover the connection or for the investigator(s) to throw in the towel, meaning you shouldn’t expect comforting clarity for a while.

The province’s C19 data hub shows that nobody is currently in hospital with the disease. Presumably that’s because the new patient is currently managing their symptoms in their home in the Northern zone, an area that, like each of the Nova Scotia Health Authority’s four zone, can accurately be described as “sprawling.” In the Northern zone’s case, that sprawl includes Truro and the whole chunk of the province extending to the New Brunswick border.

All quiet on the COVID front 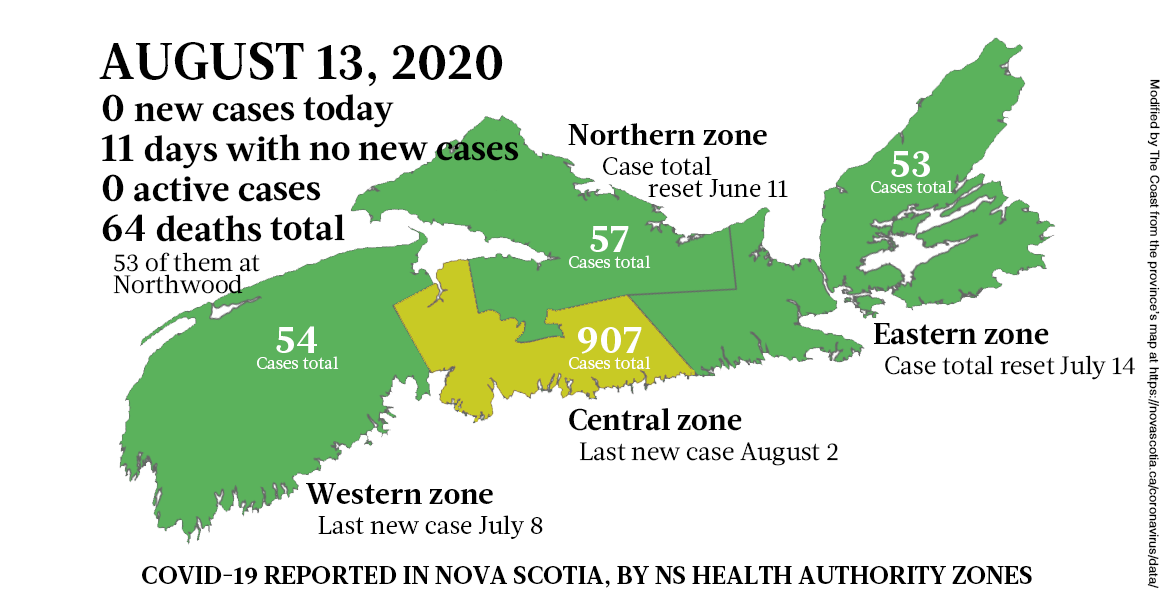 Yet another day for the province to report no new cases of C19, bringing us to 11 days in a row without a diagnosis. Right on. 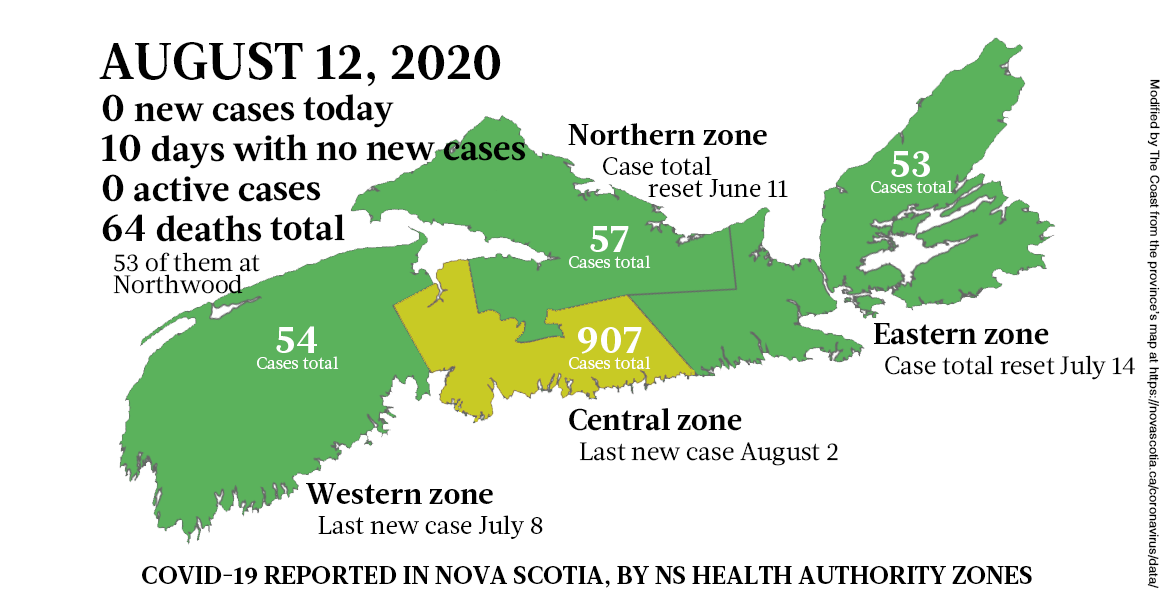 There are no new cases today according to the province's reporting, making 10 days in a row. We are loving COVID-19's summer vacation.

Cloud nine days in a row

The province is reporting no new cases of the dumb coronavirus disease, making that nine straight days with a clean bill of health. We are now nearly halfway to Nova Scotia's 20-day record, a run from June 10 through June 29.

No new cases, no active cases 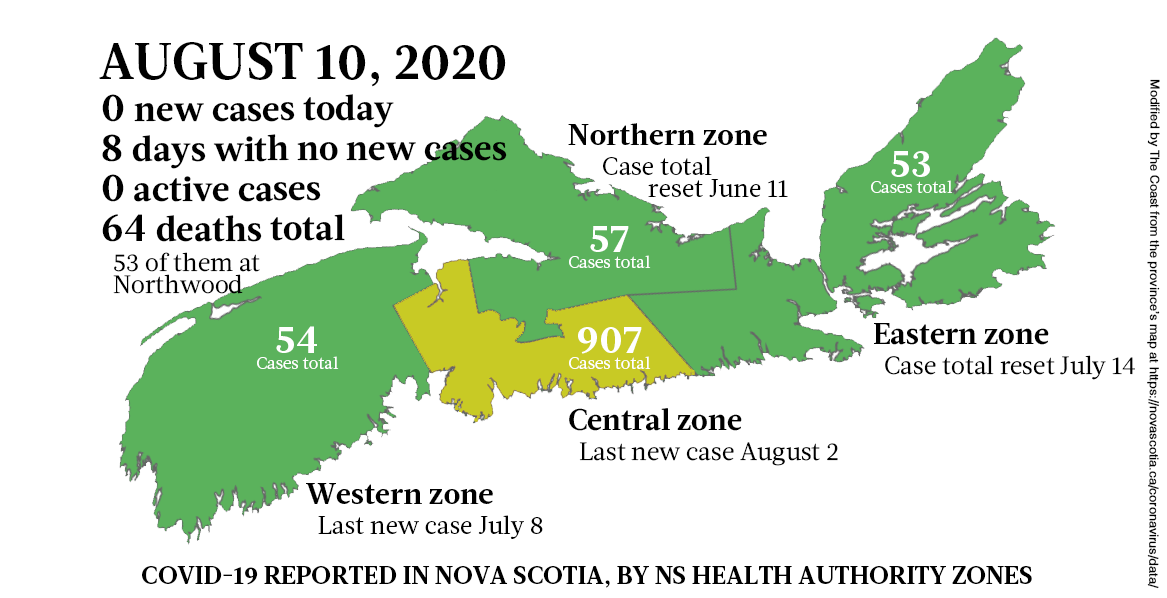 Yes! Today's provincial COVID-19 report brings all sorts of good news to this Monday. There are no new diagnoses, making eight days in a row without a case. Plus the only person who had the disease in Nova Scotia is now considered recovered. Today the province is officially free of the deadly coronavirus.

The collection of news updates from the August 3 week is here.