Just the news on COVID-19 in Nova Scotia, for the week starting August 17 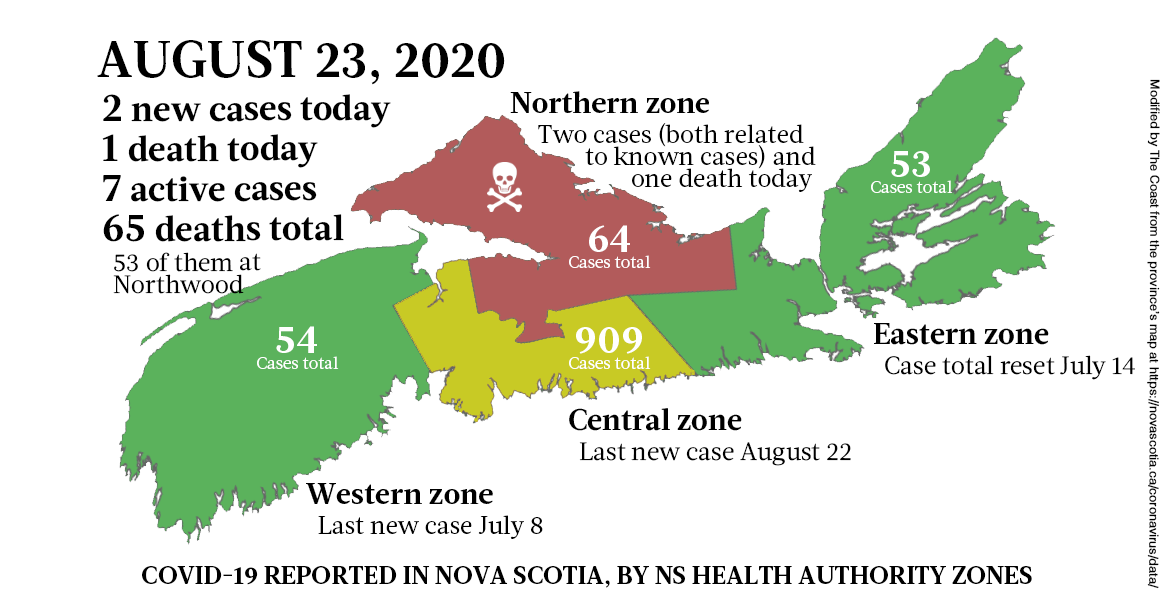 Our province has reaped many benefits of beating back the first wave of COVID-19, from bars and stores opening to joining the Atlantic travel bubble. But easily the best part was that people basically stopped dying of the disease. From April 7 through June 9, there were 62 casualties—an awful average of one death per day. From June 10 until yesterday, just two people died, and in both cases the person had died weeks earlier, but it had taken time to determine COVID was the killer. It’s quite possible all 64 people died by early June, meaning we’ve had over two months without a COVID death. Until today.

Nova Scotia’s current slow, steady outbreak has claimed a man who lived in the Northern health zone (Truro, Amherst, Pictou). The provincial C19 report says he was in his 80s, and his case “is related to a previous case of a traveller coming from outside the Atlantic bubble. He was not a resident of a long-term care home.” The province says none of the seven currently active COVID patients are in the hospital, meaning it's quite likely the man who died was the person reported Thursday as being in hospital. Our coronavirus death toll is now 65 people.

"I am saddened by this loss,” the province’s deputy chief medical officer of health, Gaynor Watson-Creed, said in the report, “and also extend deepest sympathies to the family.”

"This is a stark reminder that COVID-19 is still in our province and is still a risk,” said premier Stephen McNeil. For yet another reminder, the province is also reporting two new cases of COVID-19, both in the Northern zone, and both “linked to previous positive cases.”

The province has not faced a day with this much bad COVID news for nearly three months. Tuesday, May 26 also brought two new cases and one death.

Update on the source of cases 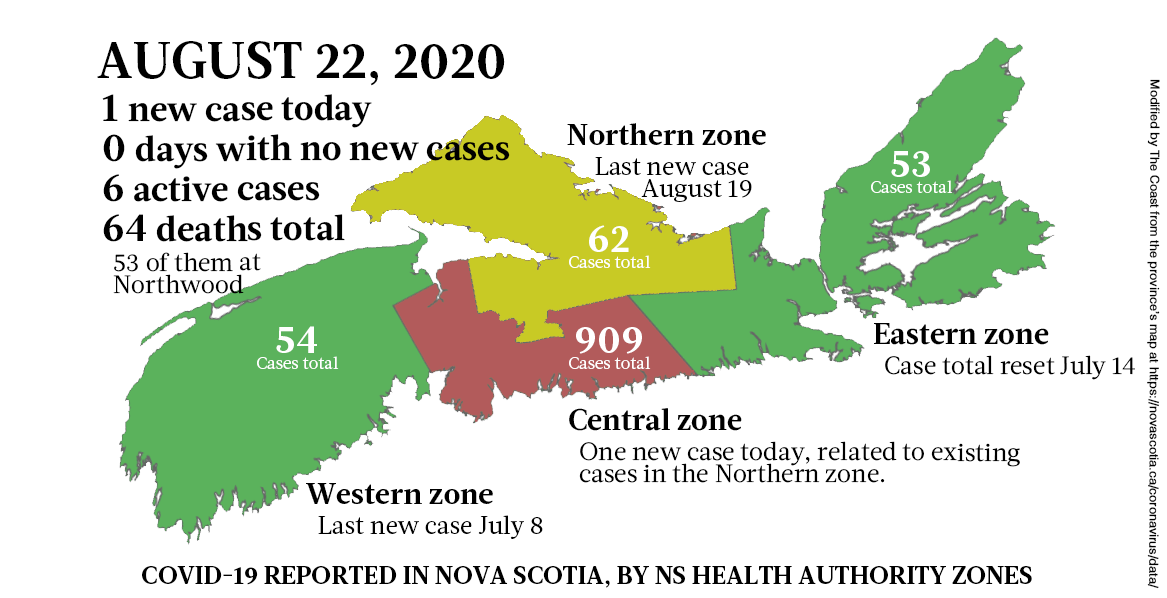 We’ve heard back from the province about the last three cases, which were announced without a source of infection specified. Today’s case “is related to existing cases,” while the sources of both the Wednesday, August 19 case and Thursday, August 20 case are still under investigation by public health. We've updated our case map—see above—to reflect the new information about the case today.

There have been seven cases since last Friday, August 14. The first four were all in the Northern health zone, and the source for each was traced back to travel. Wednesday’s case was also in the Northern zone; the cases Thursday and today were in Central.

The big fear is that community spread is happening. The longer public health’s investigations drag on, the less likely the culprit is some obvious travel connection or tie to someone who already has COVID-19. It could well turn out to be a not-obvious travel or personal link, rather than community spread—tracing up to two weeks of a patient’s movements and interactions understandably takes time. So at this point we are starting to actively hope for the non-obvious known connection.

New case in Central zone as the surge continues 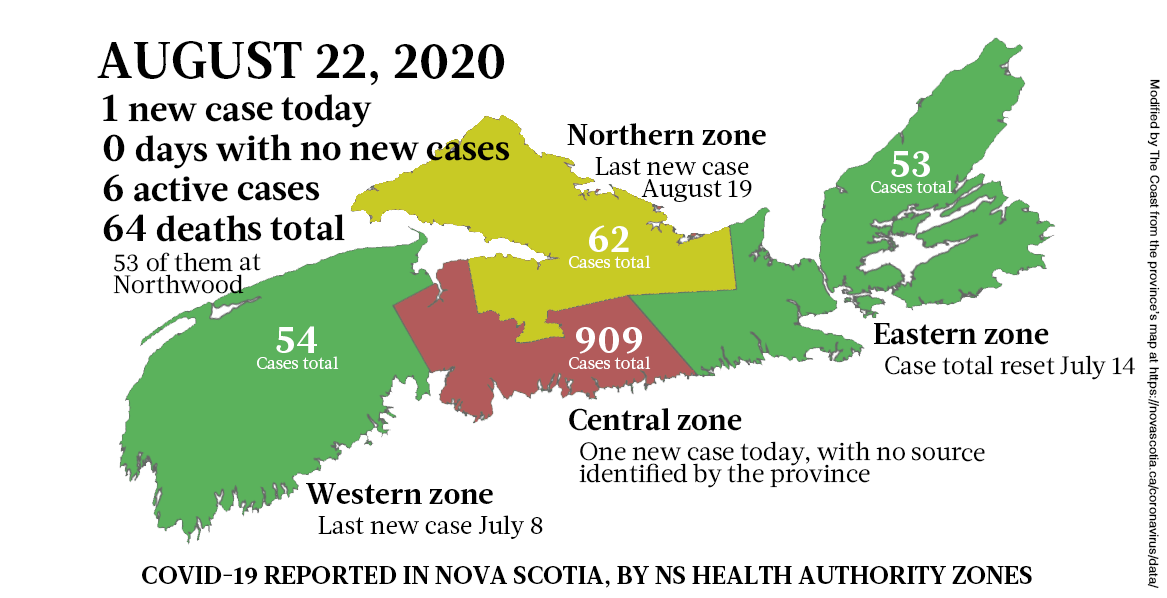 The latest COVID-19 report from the province is announcing one new case. Although the report doesn’t say so, our analysis of Nova Scotia’s case-distribution map finds this case is in the Central health zone, which includes Halifax.

Through all of June, July and most of August, there were just 14 cases diagnosed. But since last Friday there have been seven cases, with five in the Northern zone and the two most recent in Central. Most of these have been related to travel, but some, including today’s case, do not yet have a definitive source. We've asked the province for an update on public health’s presumably ongoing investigations, and will share any information we receive.

One of the seven people who developed COVID-19 in the recent surge of cases has recovered, another person is in hospital.

A quiet day of recovery 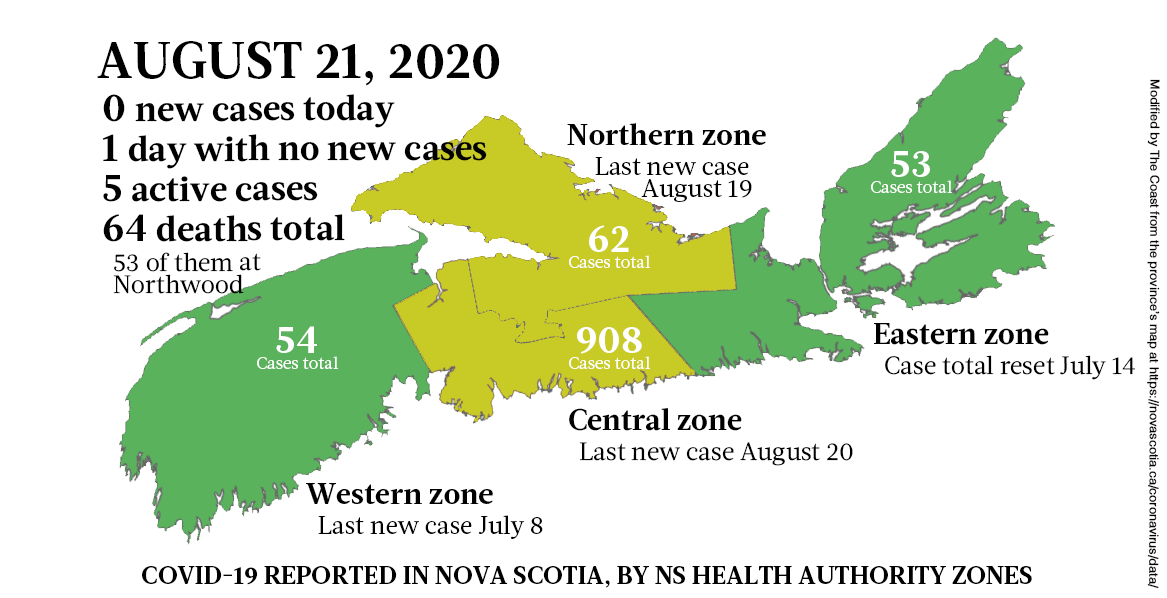 Here’s what success looks like during a slow-motion resurgence of infections. The province is reporting no new cases, and someone who got COVID-19 in this last week's spike of activity has recovered. So there are now five active cases in Nova Scotia. One of those patients is in hospital (that was announced in yesterday’s report, but they are still there today).

Keep on wearing those masks, folks. And quarantining as necessary. And calling 811 if you have any C19 symptoms.

In the unlikely case there’s any doubt that we are still actively fighting this dumb, deadly disease, the province’s state of emergency was extended today. It will be going two more weeks, to noon on Sunday, September 6, unless it’s stopped or extended again. Hint: Prepare for an extension. The SOE has been re-upped every two weeks since it was enacted on March 22. 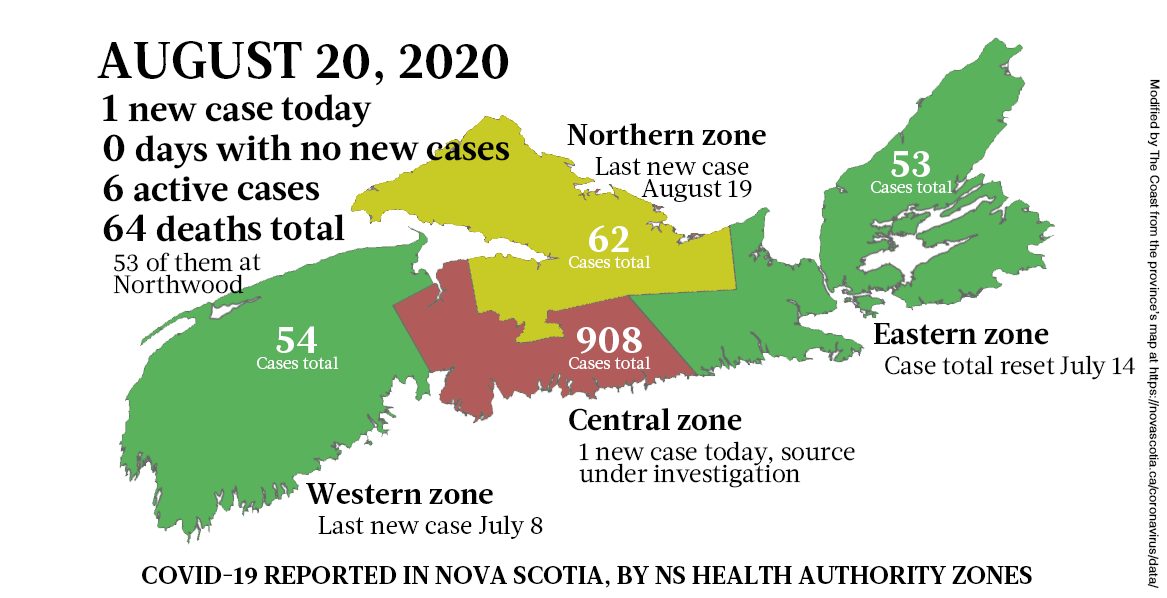 Today’s new case—the sixth since Friday—is not in the Northern health zone like the rest of the recent cases. It is in the Central zone (Halifax and widely surrounding area), and the province’s COVID-19 report does not name the source of the infection, saying only it's “currently under investigation by Public Health.”

All of this is disconcerting. Much preferable is the quick and clear one case related to travel outside Canada note from the province, which doesn’t make us fear community spread might be happening. Investigate quickly, public health, and please find out the new patient forgot all about a trip they just took through the southern United States. 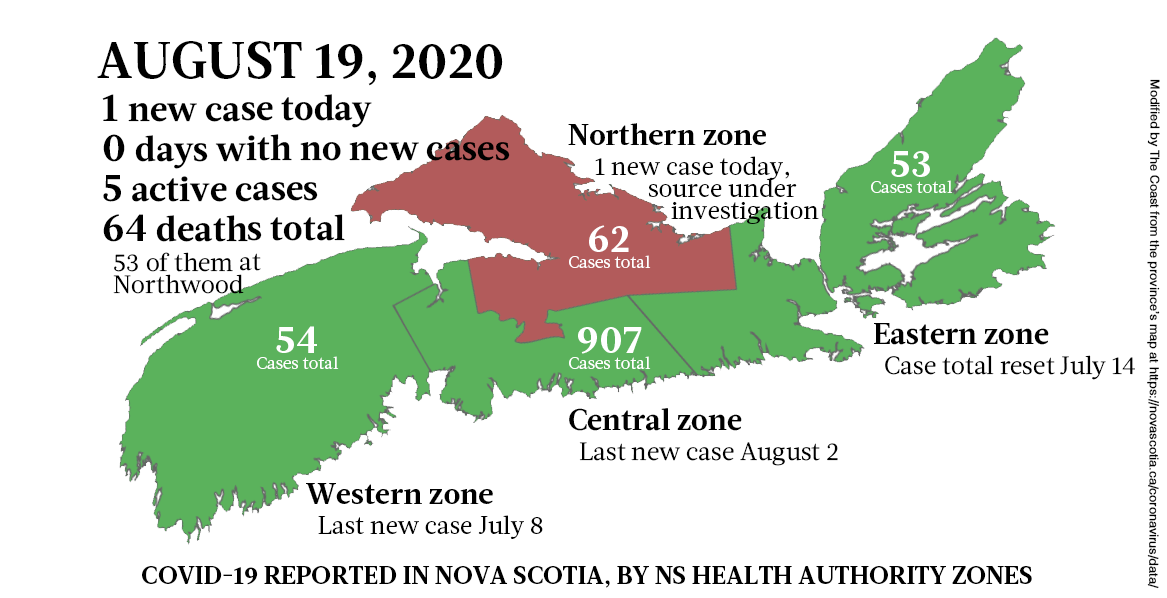 In what feels like a slow-motion outbreak, the province is reporting another COVID-19 diagnosis in the Nova Scotia Health Authority’s Northern zone. That bring us to five currently active cases, all discovered since last Friday, in the area that includes Pictou, Truro and the New Brunswick border.

The province hasn’t yet confirmed whether or not today’s case is related to any of the other four, which are all connected to travel. The email announcement to media says only that the new case “is currently under investigation by Public Health.” None of the five Nova Scotian C19 patients are sick enough to be in hospital. 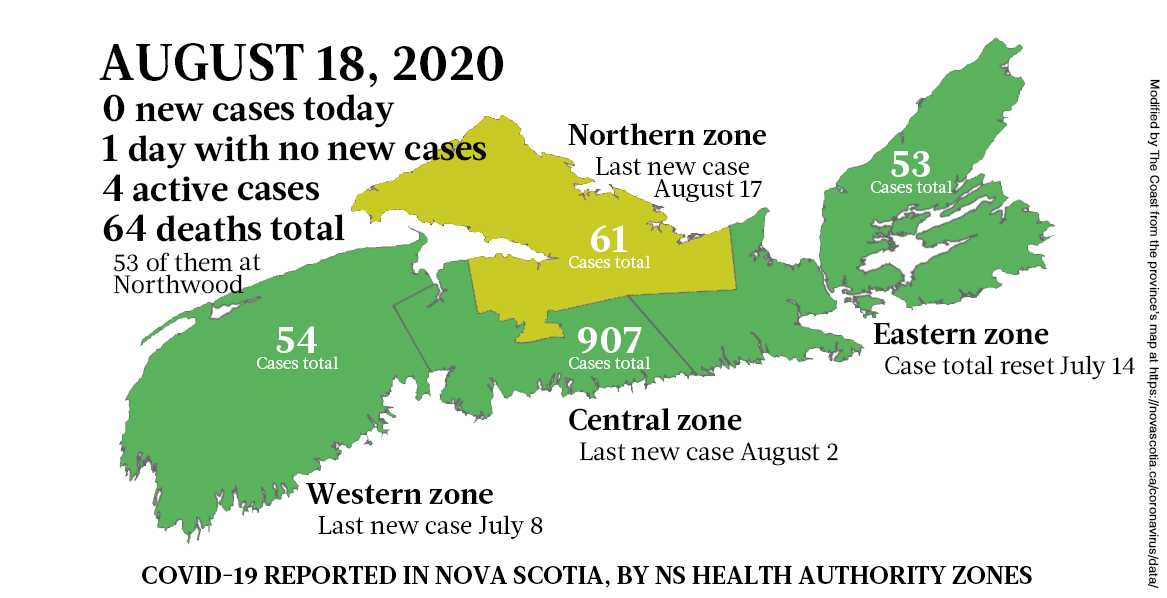 The province reports there are no new cases today. And none of the four patients who currently have COVID-19 are in the hospital. We’ll take it.

A new case makes for a very Monday sort of Monday 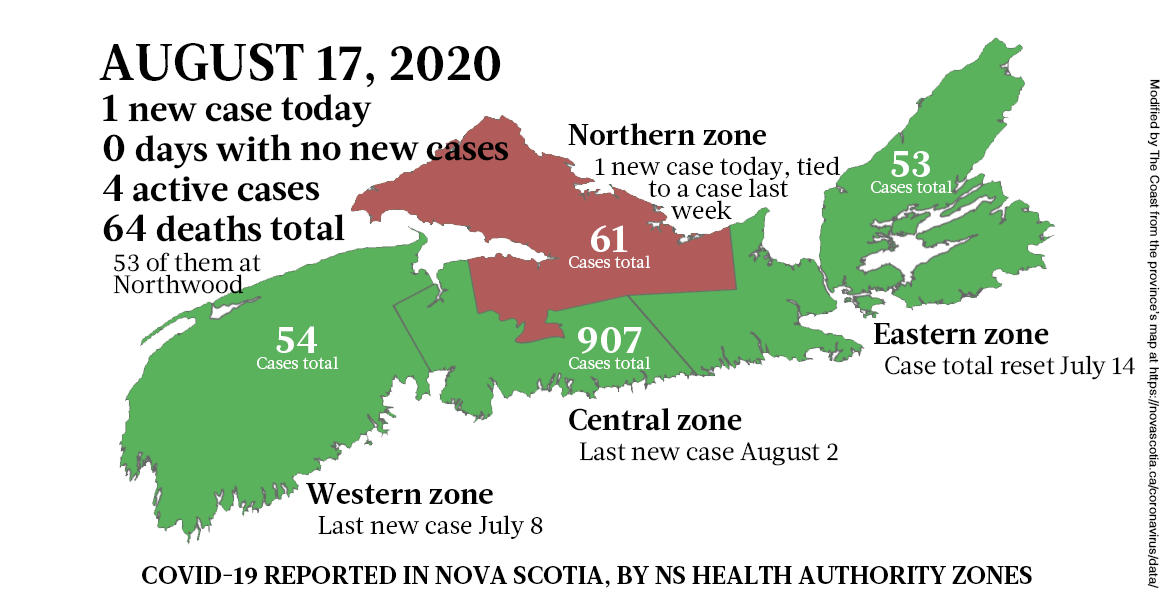 There’s another case in the Northern health zone. That’s the bad news. But today’s provincial COVID-19 report says it’s connected to one of the three cases that was diagnosed last week. That’s the less-bad news.

Nova Scotia now has four people with active C19, none of them severe enough to be in the hospital.