Just the news on COVID-19 in Nova Scotia, for the week starting August 31 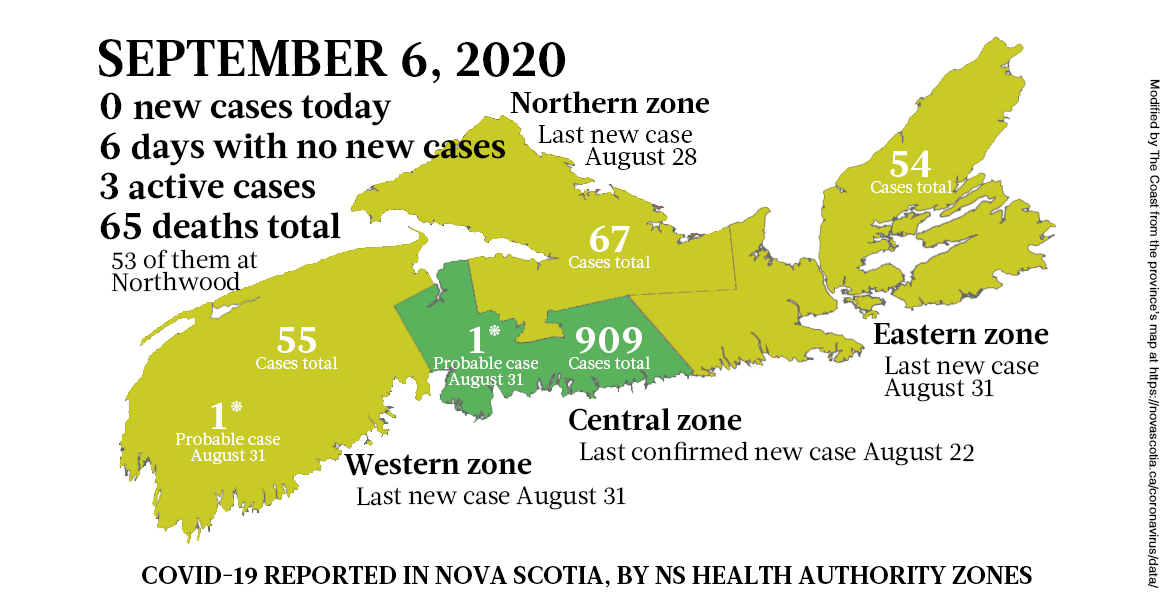 Right on Nova Scotia! The province is reporting a day of no new cases. Also, two more people have recovered from their COVID-19, to go along with the patient who recovered Friday, to bring us to just three active cases.

Plus check out our C19 case map up above: The Central health zone has now been case-free for two full weeks, and gets to graduate from the yellow-ish caution colour to an easygoing green. Great Labour Day weekend work everybody! 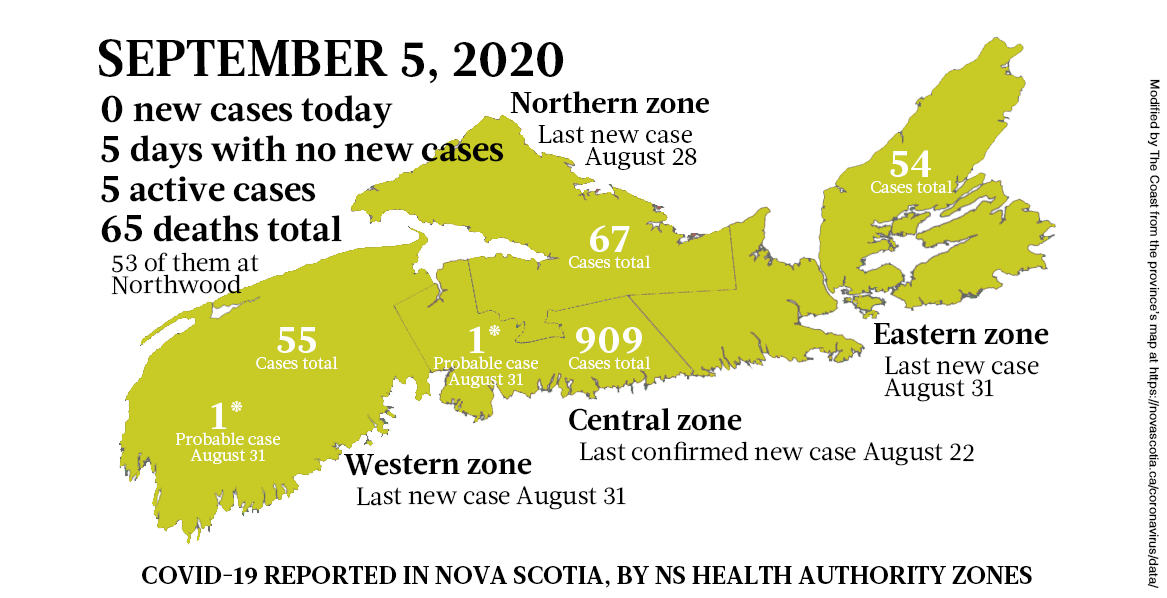 The first day of Labour Day weekend is case-free according to the province’s daily COVID-19 report. There have been a lot of tests thanks, most certainly, to the influx of a couple thousand university students in need of three tests in their two-week quarantine period. But no new cases.

This is a great way to start the holiday. 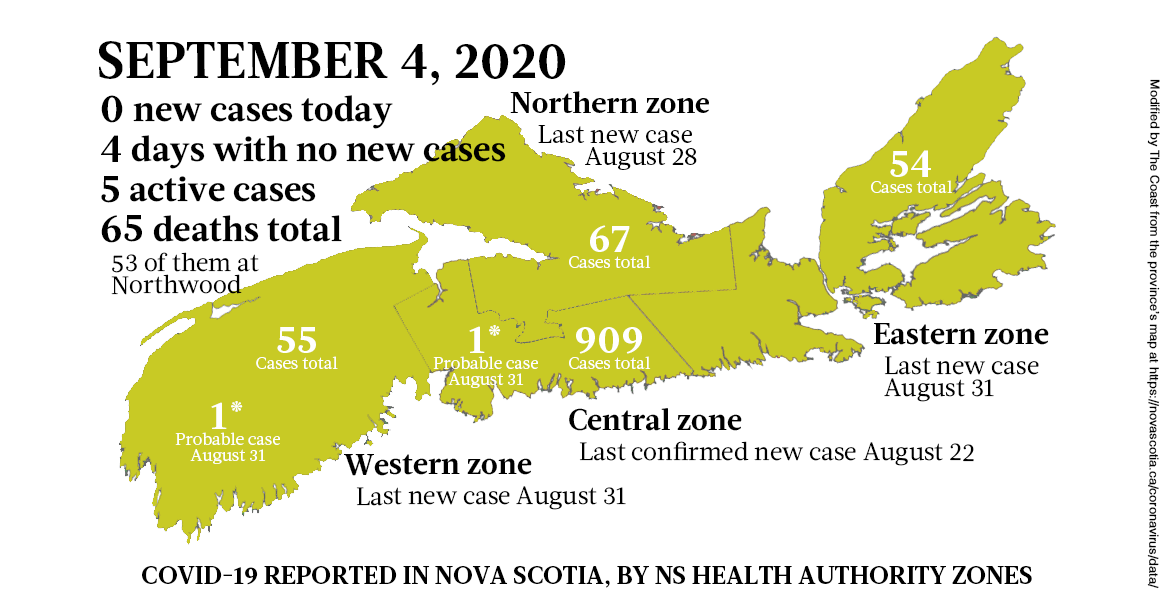 Checking in on C19 symptoms

The day’s big news from the province is not the lack of new cases (this is the fourth straight case-free day) or the state of emergency getting extended for another two weeks (which has happened every two weeks since the SOE was declared in March). The big news is the shortening of the list of symptoms that require checking in with 811 because you might need a COVID-19 test.

Rather than visiting the 811 site if you have any one of 13 varied health issues, from purple fingers to diarrhea, as of now you should make contact if you have, or in the last 48 hours had:

Any two or more of the following, again new or worsening:

”We have reviewed the symptoms that our confirmed cases were presenting with and are confident that having a narrower list will still allow us to identify people with COVID-19,” Nova Scotia public health supremo Robert Strang said in the press release announcing the change. 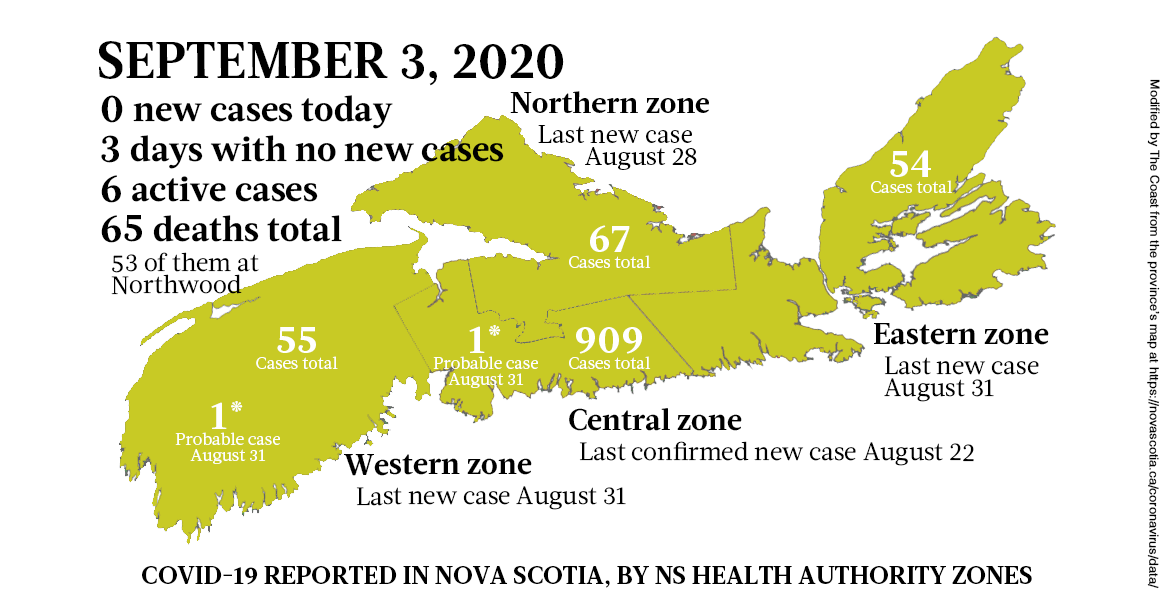 There’s wonderfully little to report from today’s provincial pandemic report. Nobody died among the six patients known to have COVID-19 in Nova Scotia, and there were no new case diagnoses. The most exciting news involves C19 testing—local labs set a daily record with 1,335 tests completed, compared to the previous high of 1,136 tests reported on May 28. (No, we don’t think that’s particularly exciting, either. The exclamation mark in the above headline is clickbait.) 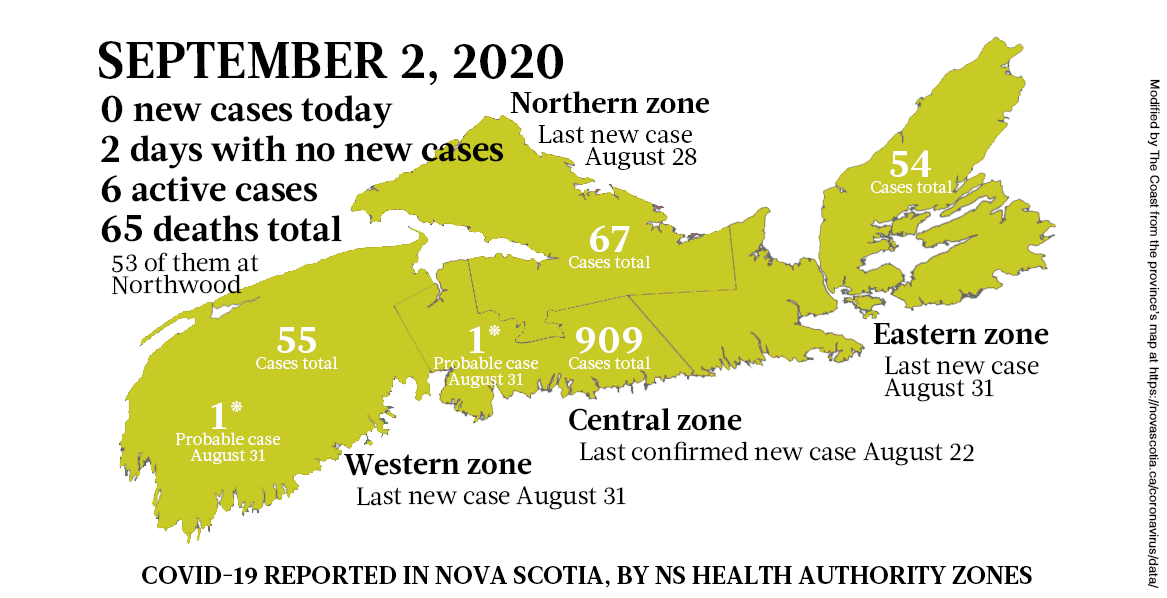 A hump day of rest

No new cases, nobody in the hospital, no recoveries, the number of active cases holding tight at six. Today’s COVID-19 report from the province doesn't have much action. The coronavirus is quiet in the middle of the week, and that's just fine with us. 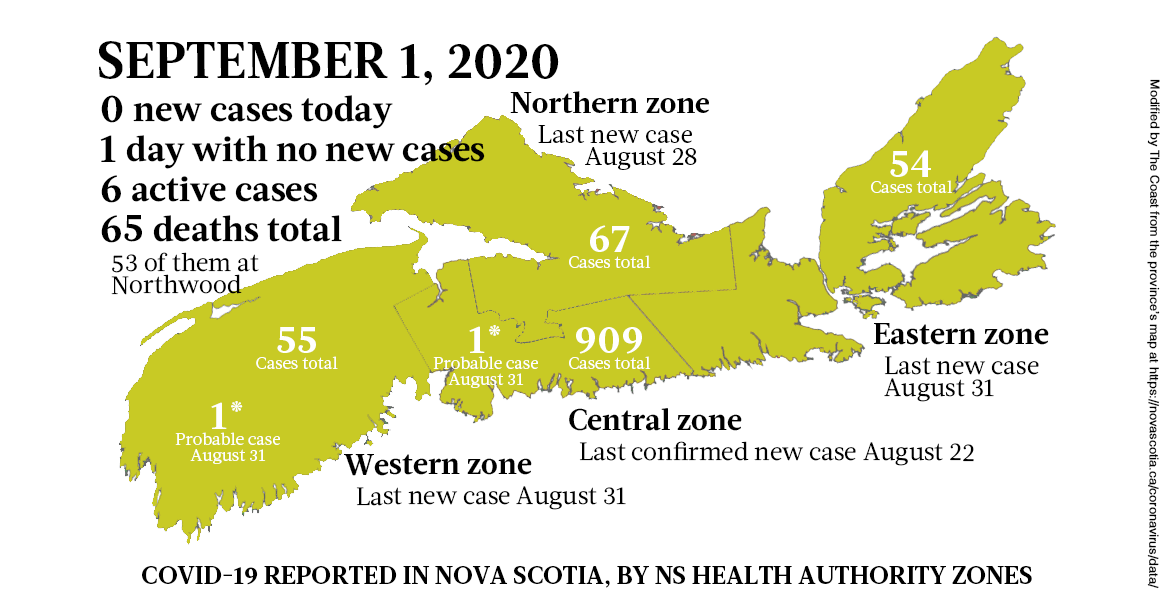 Seven months of Covid, but no new cases today

Nova Scotia top doc Robert Strang announced the province’s first diagnosed cases of COVID-19 on Sunday, March 15. (There were three that first day.) We were the last province in Canada to get known infections, a distinction that became meaningless as March—and the coronavirus—progressed. Ontario and BC combined had a total of four cases in January, and Quebec got one in February, but March was when Canada’s Covid age really began.

Now September has arrived. Welcome to our seventh month touched by Covid.

Yesterday’s C19 update from the province came out so late in the day, that a late-breaking positive diagnosis from the lab made it into the report. Normally the update would have been sent out to media earlier, and the confirmed case would wait to be reported today as September’s first new case. Instead, we begin the month on a more positive note, with no fresh cases.

The good news continues: One of the people recently diagnosed with C19 has recovered. There are currently just six active cases in Nova Scotia, and none of the patients are in the hospital. (For a grim comparison, BC's rising infection rate caused that province to reach more than 1,000 active cases yesterday, for the first time.)

Today’s provincial report also includes a little more info about the late-breaking case announced yesterday. We heard yesterday that the patient is a student at Université Sainte-Anne in the Western health zone. Today we learned the student did not properly quarantine themselves during the two-week self-isolation that is mandatory for all students coming to Nova Scotia from outside Atlantic Canada’a C19 bubble.

“As with all cases, public health is working to identify close contacts,” says the report.

This case also gives Strang an opportunity to remind everyone that Nova Scotia has a three-pronged strategy for safely re-introducing students to the province—doing multiple COVID-19 tests on each student is only one part of the plan. "The testing strategy does not replace the need to follow other public health measures,” he says in the report. “The combination of testing, self-isolating and digital check-ins will help to ensure the safety of all students, faculty and staff, and their neighbouring communities."

The report doesn't mention yesterday's confusing development, the discovery of two "probable cases" among university students, thanks to "indeterminate test results." (Our theory is the unprecedented not-negative-not-positive tests caused the reporting delay.) We've asked the province what the status of these cases is, and will let you know if/when we find out. For now they are not appearing in Nova Scotia's official case count; we've left them on our unofficial (but we think better) case map so nobody forgets about them.

A trio of travel advisories

On Sunday, the Nova Scotia Health Authority issued three warnings about potential COVID-19 exposure. Two of the advisories were for flights from Calgary—WestJet WS232 on Monday, August 24 and Wednesday, August 26. The third was for a taxi from Stanfield airport in to Halifax, not long after that Monday flight landed.

The province isn’t saying how many infected passengers were on the planes and in the taxi, or if the cab ride and the Calgary flight are connected. But Coast editor Kyle Shaw plotted the exposure hot zones in the planes and the time constraints involved, and he shares his hunches with you in a story called “Planes, strains and automobiles.” 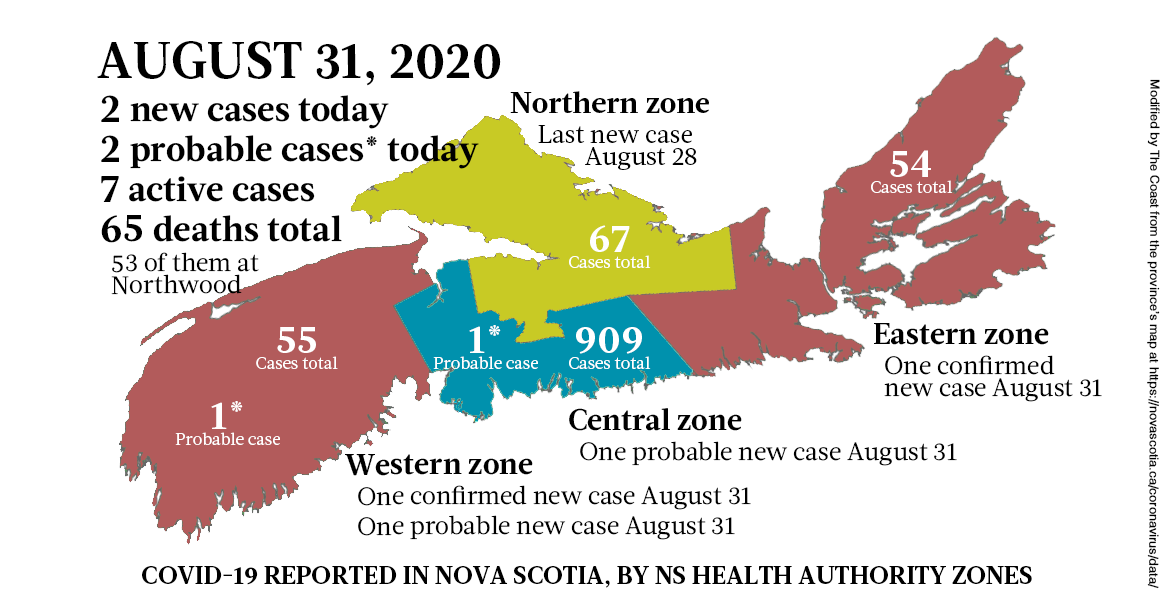 Once the province’s daily COVID-19 report came out, it was easy to understand why it took longer than usual to produce. This update includes something we haven’t seen before—“indeterminate test results” for two university students. And we figure while the authorities figured out how to explain such results to the public, that made enough time for another unusual occurrence: a positive test discovered at the lab and reported all in the same day.

Confused? We were there, too. Let’s take this big Monday step by step.

There are two new cases confirmed for Nova Scotia, one in in the Eastern health authority zone (Cape Breton, Antigonish), one in the Western zone (Yarmouth, Annapolis Valley). The Eastern case, that area’s first in more than two months, is connected to travel beyond the Atlantic bubble. “The individual has been self-isolating, as required,” says the province's report.

The other confirmed case is a student at Université Sainte-Anne. The province didn’t say if the student is at USA’s main campus in Church Point, on the western edge of the province, but it promises “More information will be shared about this case in tomorrow's case update.”

Usually any day’s provincial update reflects the results of tests that were completed the day before. Today’s Eastern zone case, for example, was identified by the lab yesterday. But the Sainte-Anne case was diagnosed “late day” Monday, i.e. today. We are speculating that it took an unusually long time to write today’s report—we’ll get to why next—and the late-breaking diagnosis arrived before the report email was sent. Then provincial officials did the responsible thing and let the public know about the case, with the promise of further info to come.

As for why today’s report was so complicated, one word: probable cases.

University and college students who move to Nova Scotia from beyond the Atlantic bubble (the provinces of NS, New Brunswick, PEI and Newfoundland and Labrador) have to quarantine for two weeks and get three C19 tests. The vain hope is all those thousands of tests come back negative. The reality is that some, like the USA student’s diagnosis, will be positive. And the twist is when a test has an indeterminate result, neither negative nor positive. Twist!

A Dalhousie University student and an Acadia University student got indeterminate tests. “Both students are from outside the Atlantic bubble, live off-campus and have been self-isolating, as required,” says today’s report. The way the province explains it, an indeterminate result can happen “because someone previously had COVID-19 and the virus is still detectable in their system, or someone has been tested before the virus is fully detectable.”

Time and further testing should resolve these cases one way or another. Until then, they are considered "probable cases" to be on the safe side. As the province says, “these two cases are being treated as though they are lab-confirmed positives to ensure all precautions are taken.” However, because they aren't actually confirmed new cases, they are not included in the province’s C19 tally, which stands at 1,085 total cases since March 15, and seven currently active cases.

On our Nova Scotia case map, above, we’ve singled out probable cases with an asterisk and a new colour. The Central zone (Halifax and surrounding area) is this colour—it’s in the blue family—because of the probable case at Dal. The Western zone is the familiar red-adjacent hue of a new case despite the probable Acadia case, because in our estimation the confirmed case at Sainte-Anne takes precedence. With cases in the last two weeks but not today, the Northern zone (Truro, Pictou, Amherst) is yellow-ish. And no area of the province is carefree green. Welcome to back to school.

No COVID-19 report yet

It’s not far from 3pm, and the province hasn’t issued its daily C19 update. This may not be unprecedented (the arrival time of the daily email to media is one of the few coronavirus statistics The Coast doesn’t track), but it’s unusual. When the report does arrive, you will hear about it here.