The Nova Scotia Health Authority issues warnings about COVID-19 on flights from Calgary and a taxi to Halifax. 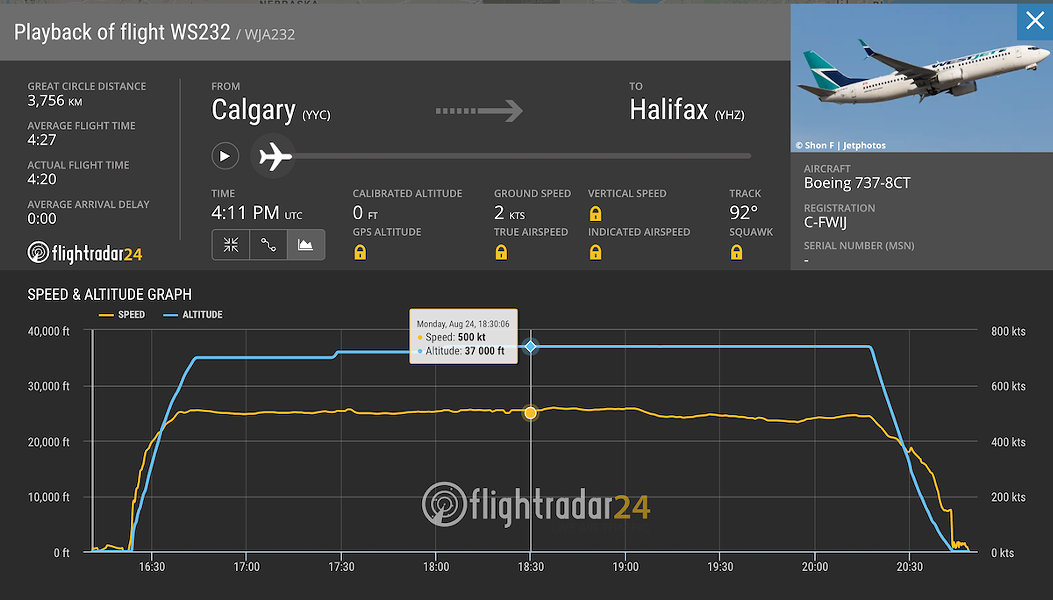 A traveller has to be awake early to make it to Calgary International Airport in time for WS232, WestJet’s daily 9:30am flight to Halifax. On top of arriving early (two hours early is the recommendation) to deal with virus-safety protocols, YYC is warning of construction delays on the Airport Trail.

Getting to the plane could definitely disrupt a person's regular morning schedule, depending on the passenger. Maybe they’re a hard-driving student who’s usually up before dawn anyway, or a hard-partying executive who considered just staying up all night. Hell, they could have started their day in Vancouver, flying in to Calgary to catch the Halifax flight. All of which is to say there are plenty of possibilities— and a lot of unknowns.

During the time of Covid, the big scary possibility is someone on the plane having the coronavirus strain that causes COVID-19. And it can be several days before that status is known, as the Nova Scotia Health Authority just demonstrated.

On Sunday August 30, the NSHA issued warnings about possible C19 exposure on two Calgary-to-Halifax flights that arrived last week, both WS232s. The first warning came out in the late afternoon, emailed to media at 3:53pm, for “West Jet flight WS 232 on August 24 from Calgary to Halifax. It departed Calgary at 9:30 am and arrived in Halifax at 5:14 pm. Passengers in rows 20 to 24 seats A, B, C, D are more likely to have had close contact.” (NSHA bolding.)

If you were in the designated seats on the Monday, August 24 flight or the Wednesday, August 26 flight, you’re asked to “call 811 for advice.” But NSHA wants everyone who was on those flights to be wary: “Those present on this flight but not in the identified rows and seats should self-monitor for signs and symptoms of COVID-19,” says each announcement. Symptoms can take up to 14 days to present—a concern that will last through next Wednesday, September 9 for those on the later plane.

The health authority scrupulously avoids specifics of the potential exposure on the planes. We don’t even know if it’s one person or multiple people who turned out to have C19 on each flight, the announcement leaving the question open by referring to “the person(s) confirmed to have COVID-19.”

But, mapping out the hot zone of “close contact” seats gives us a hint at what’s happening.

Assuming an infected person is like a lightbulb, shedding coronavirus in all directions, then they are the middle of any clump of seats singled out by the province. For last Wednesday’s flight, that could mean row 23 or 24—or quite possibly both. The flight-tracking service Flightradar24 identifies the aircraft that flew WS232 on August 26 as one of WestJet’s Boeing 737-800 planes, with six seats across: The advisory spans the left side of the plane, from the window, A, to aisle seat C. Because the potential contact doesn’t cross the aisle, the passenger(s) in question likely had window and/or middle seats. On the seat map graphic below, that gives us four red seats—where the infected passenger(s) may have been sitting—among the clump of yellow close contact seats. 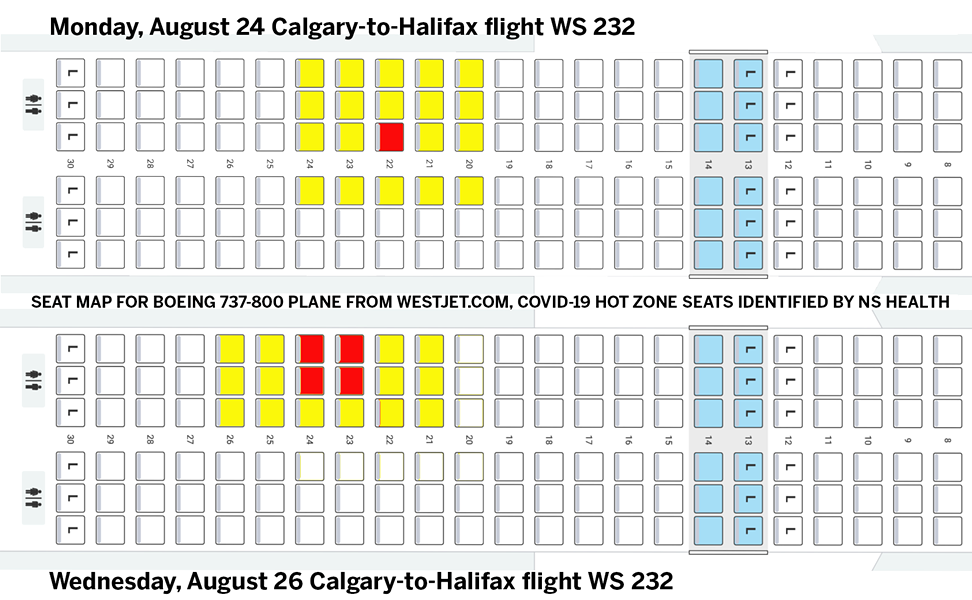 It’s easier to pin down the location of the main infected passenger on the Monday flight. They are almost certainly smack-dab in the middle, row 22, potentially radiating COVID-19 up to rows 20 and 21, back to rows 23 and 24. Flightradar24 says it was also a 737-800 flying WS232 on August 24, again with six seats across. But this advisory spans from the left window A over to right-side aisle seat D, placing our lightbulb in seat C. By this speculative logic, the Wednesday flight probably had at least two infected passengers—one in row 23 and one in row 24—while there may have been only a single infected passenger Monday.

(Among the possibilities and unknowns, if there was indeed an infected passenger in 24C, another infected person could be in 24B and/or 24A without increasing the range of close-contact seats. So Monday the plane probably had from one to three infected people, while Wednesday was likely from two to four infected passengers.)

The Monday flight left Calgary almost an hour late—at 10:23am according to Flightradar24—and was in the air about four and a half hours before arriving at Halifax Stanfield airport at 5:43pm local time. If Flightradar is accurate, that’s basically half an hour after the scheduled 5:14pm arrival put out by the NSHA.

Does that matter? It might, because yesterday the health authority issued a third potential-exposure warning yesterday, this time about a “taxi from Halifax airport on August 24.” Emailed at 6:37pm, the “advisory is related to an individual(s) who accessed a cab departing the Halifax International Airport on August 24 between 6-7 pm, travelling to a residence in Halifax. This individual(s) were asymptomatic at the time. The advisory is being issued out of an abundance of caution.”

We have asked the NSHA if the taxi passenger is the same person who flew in from Calgary. (For simplicity’s sake, we've also taken the step of assuming there is only one person, although the following applies just as easily if there were two or three people in row 24.) The health authority has not said either way. However, the extra half hour spent coming from Calgary tightens the timing window to narrow in on it being the same passenger.

This person was awake early, then flew across the country, so they probably didn’t want to linger at Halifax Stanfield. If they landed at the scheduled 5:14pm, even if it took a while to get their checked luggage, a motivated traveller could be out of the airport before 6pm, leaving some other C19-infected person to get in the cab between six and seven. On the other hand, if they landed at 5:43pm, even if they only had carry-on, it would be practically impossible to get off the plane—they were coming from row 24, remember—and out of the airport by six. Them getting in a cab between six and seven fits perfectly. Which leaves a big question hanging from the NSHA advisory: Were you in that taxi, too?