COVID-19 news in Nova Scotia, for the week starting October 19

Mapping out the numbers

Yesterday we talked about a mistake on Nova Scotia’s official COVID-19 map. We think this map is a lost opportunity for the province to provide information, because it doesn’t use such common mapping tools as colour or words to give context to the four numbers it presents. That’s why we produce our own version every day. But at least it always gets those numbers right. Almost.

Saturday the province reported on the unusual case of someone who lives in the Eastern health zone getting C19. The weird part is they aren’t currently in Nova Scotia. The person was infected by, and recovered from, the disease while in another province—maybe they go to school or have a job there—but for public health record-keeping they apparently count as a Nova Scotian case. So on our map, the Eastern zone went up to 55 cases. Yet on the province’s map, Eastern still showed 54 cases.

What gives? Did the Canadian public health system suddenly realize it’s better pandemic-fighting strategy to focus on where a case happened, rather than where a patient calls home? Or was it just a glitch?

“Just a glitch,” the province told us, promising that the “website now reflects 55 cases.” And sure enough, it does. So the official map is correct. But we still like ours better.

You can compare the two with the above information toy, moving the slider back and forth to get a feel for each map. Please excuse the tilted numbers and zone names on the province’s version—we needed to rotate it to visually sync up with ours. The people responsible for the province’s map may be stingy with information, but they’re not animals, and on the provincial C19 site the numbers are straight up and down.

After reporting three cases yesterday—two travellers bringing COVID-19 to Nova Scotia, one Nova Scotian who got it in another province and is still there—the province is quiet today. No cases, none of the six people who currently have C19 in hospital or recovered. Nice work, Nova Scotia.

Same day the province announces three cases, the Nova Scotia Health Authority has another of its semi-frequent warnings about possible COVID-19 exposure on a plane that flew into Halifax. Hard to believe it's a coincidence. Here are all the details, straight from the NSHA’s email:

Nova Scotia Health Public Health is advising of potential exposure to COVID-19 on WestJet flight 254 on October 17 from Toronto to Halifax. It departed Toronto at 21:45 pm, landing in Halifax at 12:47 am on Oct. 18. Passengers in rows 1 to 5 seats A, B, C, D are more likely to have had close contact. Passengers in these seats are asked to call 811 for advice and to continue to self-isolate.

It is anticipated that anyone exposed to the virus on these flights may develop symptoms up to, and including, October 31. Those present on this flight but not in the identified rows and seats should continue to self-isolate as required and self-monitor for signs and symptoms of COVID-19.

Things just got real again after a smooth week without a case. The province is reporting three new cases of COVID-19, all related to travel outside Atlantic Canada. That brings Nova Scotia’s all-time total to 1,100 cases. But there’s some good news in this report.

Two of the cases are in the Central health zone (Halifax and area), and we’re told both patients are properly self-isolating. That’s the best we can hope for.

This is due to the Panorama public health system most provinces use. As top doc Robert Strang said when NS got fully set up with Panorama, “because of the way we report things between provinces” the system connects cases to a person’s permanent residence, rather than to the place the person got the disease. Anyway, it means our case numbers went up even though the case is safely away from here.

If you’re confused, you’re not alone. While the province’s report says there’s a new case in the Eastern zone—which would bring it up one from 54 cases yesterday to 55 today—at the main provincial site with C19 data, the official map still shows 54 cases in the Eastern zone, the same as yesterday.

We’ve got questions in to the province to figure out what is going on. In the meantime, our map (below) has the latest numbers as reported by the report. (This discrepancy is not part of the good news. It’s actually disconcerting news. But this is the weekend, so maybe the data person has the day off.)

For a last bit of good news, one person who had C19 recovered overnight. So if you’re keeping score, we got two new cases in the province, one case out of the province and one recovery—in other words, you could say we have a net increase of a single case inside Nova Scotia. That feels much better than “three new cases.” 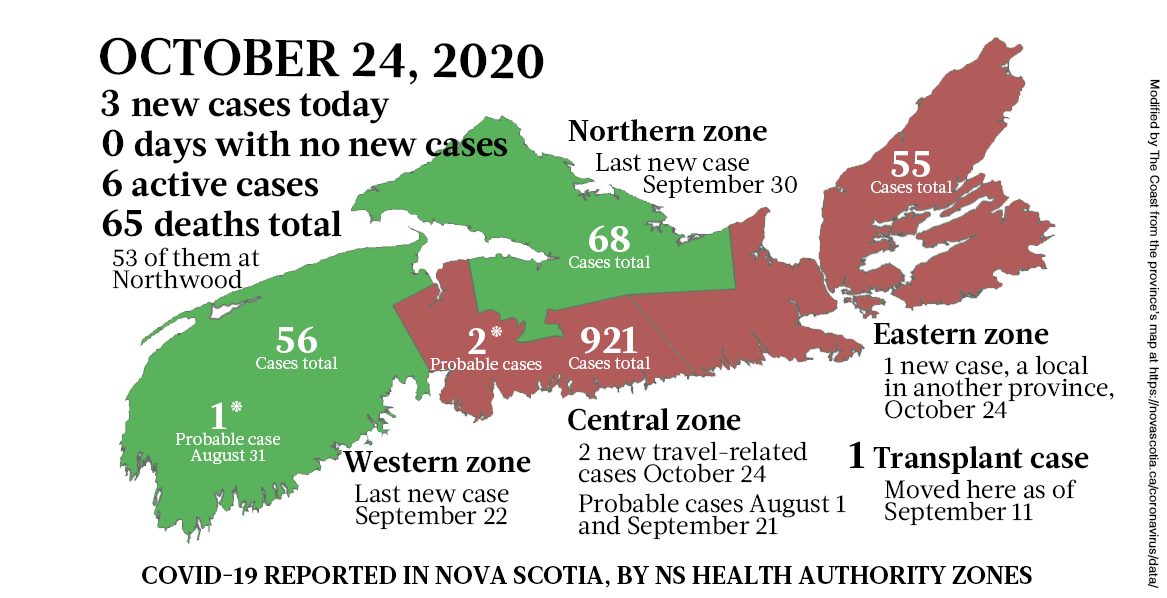 The province has nothing to report in COVID-19 today. No new cases. No people recovering from old cases. No interruption to Nova Scotia’s case-free streak, which now stands at five days, longer than any other province.

This is a good way to finish the week.

Sadly we can’t say the same about the west of Canada—the six provinces that aren’t in the four-province east-coast bubble—where the second-wave case counts keep rising.

Although it’s too early in the Atlantic time zone to get today’s numbers from the Pacific side of the country, yesterday saw another record: 33,465 total new cases in the last 14 days. So far in the C19 pandemic, Canada has never had such a high number. The worst part? That's what we said at the beginning of the week (see Monday).

Nova Scotia’s head public heath official Robert Strang issued a statement today, in response to New Brunswick’s ongoing COVID-19 outbreak. After NB put new restrictions on travel to a northern part of its province, Strang echoed that move: “While there are no changes to our border policy at this time, we recommend Nova Scotians avoid unnecessary travel to the Campbellton-Restigouche area.”

In the same statement, the top doc gave a reassurance about travel to a different part of New Brunswick. “Restrictions in the Moncton area have been reduced as there are no new cases there,” Strang said, clearing the way for anyone who want to visit Halifax’s closest frenemy.

It’s been a bad week for no-case streaks. On Monday, the Yukon reported two COVID-19 diagnoses, its first new cases in 72 days. Tuesday, the Northwest Territories reported a case—then two more cases Wednesday—ending NTW’s virus-free streak at 196 days. Prince Edward Island also had a case Tuesday, after eight days without a diagnosis. That gives Nova Scotia, now at four case-free days in a row, the Canadian streak lead. At least among jurisdictions that have gotten C19; Nunavut still hasn’t had a single case in its local community during the pandemic, although workers from other places have imported infections to their worksites.

As well as a lack of new infections, Nova Scotia’s Thursday C19 update includes a recovery. There are now just four people actively fighting the disease in the province, to go with the four-day caseless streak.

For the third day in a row, Nova Scotia has no new COVID-19 cases. Hooray for hump day! 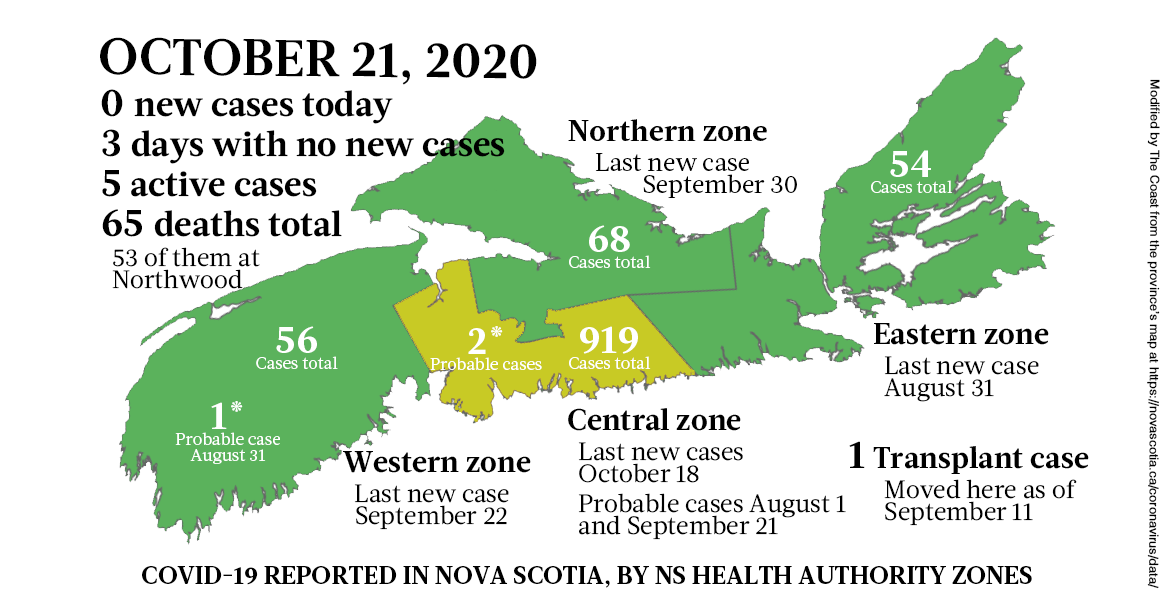 No new cases in the province’s COVID-19 update, plus someone who had the dumb disease has recovered. That leaves us with a two-day no-case streak, and just five active cases. 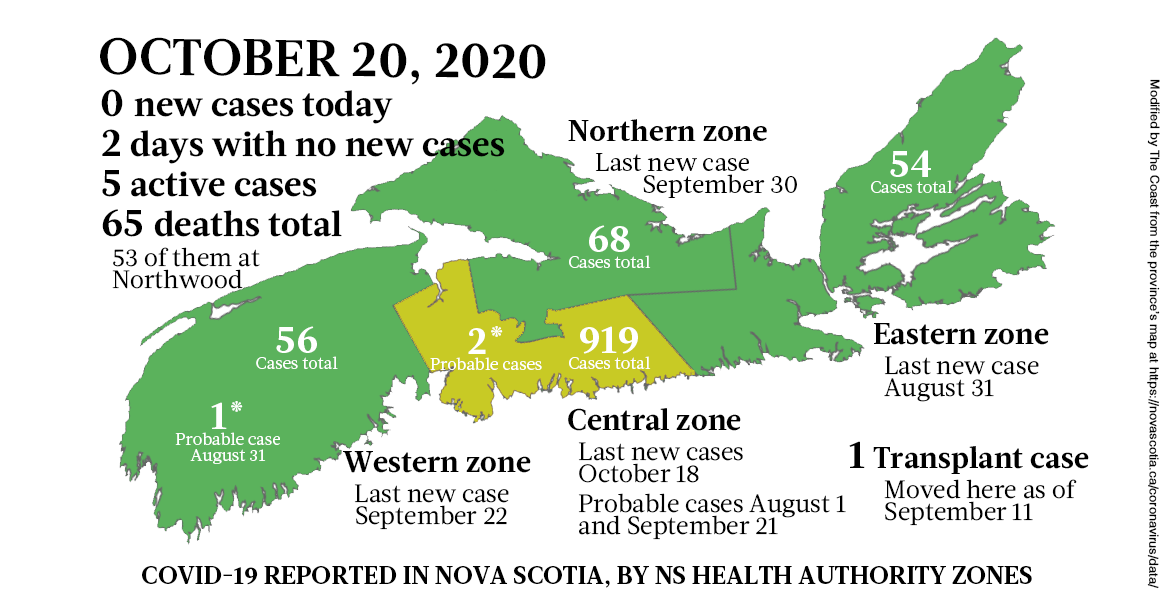 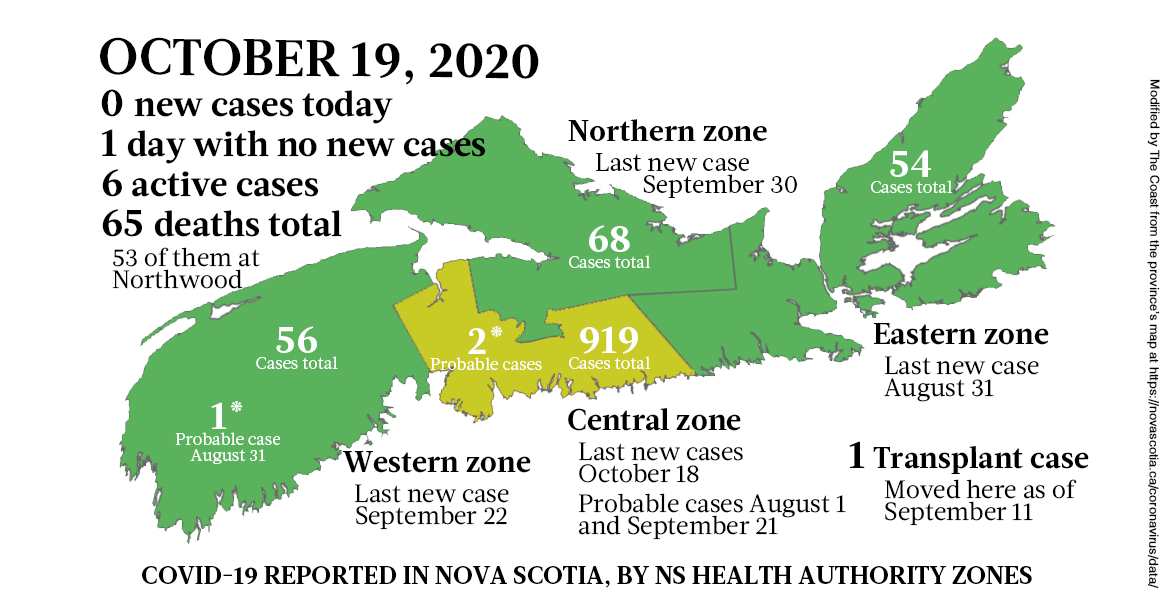 After a weekend with new cases every day, as the week begins the province is reporting no fresh diagnoses. Phew.

The second wave is still growing

COVID-19 is spreading faster than ever in Canada. This was true a couple weeks ago when last we studied at the national numbers, and it’s still true. The second wave just keeps growing. The following graph shows the first wave, which peaked in May, and the current, larger wave.

At the start of the month, the pattern was the same as it is now: The disease is non-existent in the North, the Atlantic bubble has very few cases and the six western provinces are setting record numbers. But let’s talk about the bubble for a minute. Compared to the other provinces, it’s true the east coast provinces don’t have many cases at all. October, however, has seen Atlantic infections go up almost 10 times: on October 1, the rolling 14-day total was 14 cases; yesterday, October 18, it was 129 cases.

New Brunswick’s outbreaks lead the increase, but Nova Scotia, PEI and Newfoundland and Labrador are all getting cases. Again, not many compared to the other provinces, which had a rolling 14-day total of 31,863 cases October 18—nearly 250 times the east coast. The Atlantic trend, though, is going in the wrong direction. We’ll be watching these numbers closely in coming weeks.