Put a jab in the arm on your New Year’s resolution list. 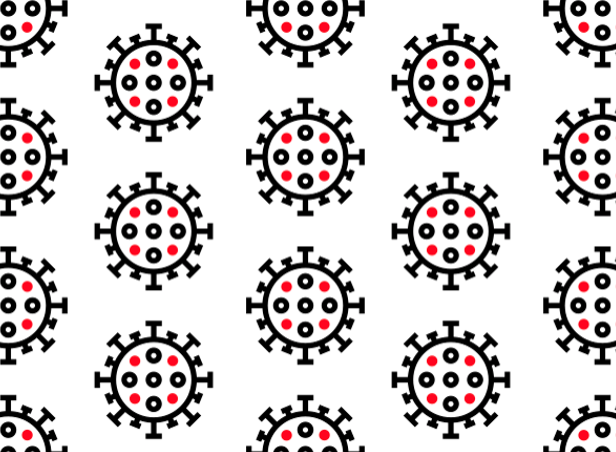 The Nova Scotia government gave more details on the COVID-19 vaccine roll-out program in Nova Scotia on Tuesday. With both the Moderna and Pfizer vaccines approved by Health Canada, the province is aiming to vaccinate up to 10,000 people per day by mid-May.

That's a fair stretch of time since the first vaccine clinics at Dalhousie University on December 16, where 300 to 400 healthcare workers got jabbed per day. But to ramp up numbers to the intended level, the province will need to do a lot of work.

“We need to acknowledge and understand that this is by far the most complex vaccine program that we’ve ever implemented,” Halifax's top doc Robert Strang told the public during the January 5 press conference.

The province released a document to The Coast and other media outlets outlining the newly defined stages of the vaccine program. December marked Phase 0 or the "mobilization" phase, with 9,550 total vaccines delivered. Of those, the government says 2,720 Pfizer vaccines have been put in arms, with another 2,720 reserved for second doses to those same people.

“Every dose we’ve received has either been used or is allocated for use in the next few weeks,” Strang said.

The 3,700 Moderna vaccines received on December 30 are being kept for a special clinic at Halifax-area long-term care homes later this month. Strang didn’t give an exact date this clinic will begin, but it will take place at Northwood Halifax, Shannex Parkstone and Oceanview.

“Those final arrangements are being made, we just today actually figured out the shipping piece with trying a different method. I expect it very soon, we’re just working out those final details with the long-term care facilities themselves,” said Strang. 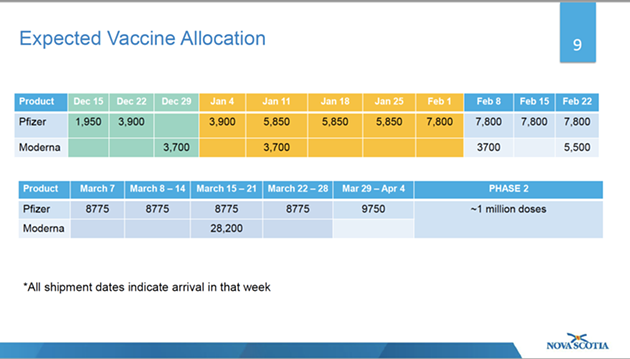 Next, Phase 1 will continue from January to April 2021, and is marked at the "limited supply" phase, where the province says it will be vaccinating mainly healthcare workers, and those over age 75, giving out up to 140,000 doses of the vaccine.

Strang says this phase is especially important, because it can help the government figure out how to best deliver vaccines on a larger scale. This could mean setting up vaccine clinics at doctor's offices or schools.

“It puts us in a position to be ready when we get much larger amounts of amounts in vaccines in Phase 2, we’re not trying to figure out how to deliver that, we’ve done all that work in Phase 1,” Strang said.

Following that, Phase 2 or the "ramp up" phase begins in May 2021. NSHA officials told The Coast in a technical briefing that almost a million doses of the vaccine will be administered during this phase.

“That’s simply based on the predicted delivery of the amount of vaccines we’ll start to get when we get into Phase 2, and our objective will be to meet that,” Strang says.

This widespread vaccination will include remaining healthcare workers as well as “essential workers,” but the province has yet to clarify who it will consider an essential worker—a definition that the federal government is leaving up to individual provinces to decide. “That may be different in Nova Scotia than it is in Ontario,” Strang said.

This phase will also have to include getting more Nova Scotian health professionals educated on how to administer the vaccine, or training people already familiar with administering needles on how to set up a C19 vaccine clinic.

Government officials also said that by Phase 2, we might have other vaccine products available and approved, making it even easier to access.

Finally, once vaccines are widely available, we’ll reach the "steady state," which doesn’t have any official time period associated with it. Phase 3 will see the introduction of mobile clinics in remote areas, expanded community clinics and—hopefully—herd immunity.

Although like everything right now, dates aren’t set in stone, the government hopes to give 75 percent of Nova Scotians the chance to get vaccinated before September 30. Starting the second week of January, the province will begin reporting vaccine rates weekly on its provincial C19 website.

And a reminder that until widespread vaccination is in place, masks will likely remain mandatory, physical distancing essential, and all the other things put in place to keep spread of the virus low will likely remain.
Want more info about what the vaccines are and how they work? Click here or here.