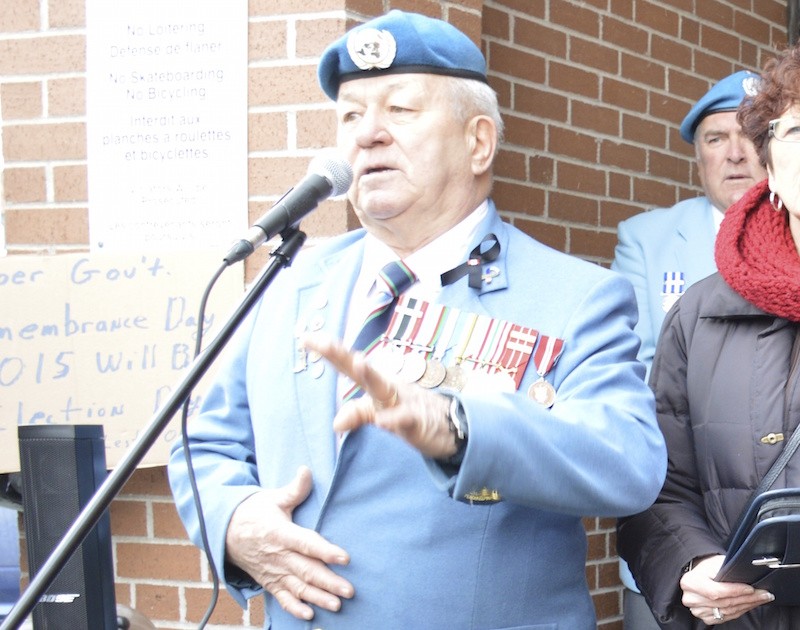 “We got word that the prime minister was going to be there,” says Montefrisco. “But we weren't there to protest. We weren't holding any signs. Some of us wanted to talk to Harper, because we're concerned. There are lots of suicides. Someone took his life just two weeks ago on the firing range at Gagetown.”

In a political climate where Harper appears loathe to talk to anyone off-script, dissing veterans outside the Legion in Fredericton, in and of itself, is not particularly shocking. The cold shoulder to Montefrisco and crew, however, is arguably indicative of a far larger phenomenon—that of a political party that has come to view veterans as increasingly disposable members of society, once their active duty is done.

The Conservative clawbacks to services available to veterans are real, are a slap in the face, and are impacting the quality of life of former service-men and -women across the country, says 36-year United Nations Peacekeeping veteran Ron Clarke, of North Sydney. They've also politicized a nationwide veteran-led movement looking to oust Stephen Harper in the upcoming election. Clarke and his Anybody But Conservatives team don't particularly care who you vote for, so long as they aren’t Conservative.

“I was always a Progressive Conservative, growing up,” says Clarke. “When this Conservative party formed, with its Reform base, this is not the same party I ever knew. Right now, we've got people across Canada telling us where there are swing ridings, and we're going out there in force. And I mean force. In order to maintain our integrity we cannot ask the public to vote one way or the other, only that you vote anybody but Conservative.”

While it aspires for change in the October 19 federal election, the anti-Conservative sentiment amongst veterans in the Maritimes has been growing for several years now. With a population base that far over-represents itself in the Canadian Armed Forces, a move made against services and compensation to veterans is a move made against the Maritimes-based families and friends of those veterans.

In November 2013, for example, when the announcement was made that nine Veterans Affairs offices would close in Canada, almost 3,000 people came out in protest outside the soon-to-be-shuttered Sydney-based office.

In the wake of the office closures, testimonial videos from veterans, prepared with assistance from the Public Service Alliance of Canada—PSAC members largely staff Veterans Affairs offices—spoke to the importance of the offices in veterans' lives. This included, in at least one case, a prevented suicide.

A telephone hotline, a phone app and a website have replaced the office in Sydney, with Service Canada employees now expected to take on many of the service provision tasks.

“The Harper Conservatives claim that they are in touch with veterans,” says Carl Gannon Jr., national president of the Union of Veterans Affairs employees. “But the only way to be in touch with veterans is to actually listen to what veterans are telling them. They don't have to listen us, at the Public Service Alliance. But they do need to listen to veterans. And right now, across Canada, veterans are upset.”

Gannon Jr. notes that under Harper, over 900 Veterans Affairs employees have been cut. Of those 900, a full 28 percent have come from front-lines service delivery staff.

To Peter Stoffer, the Official Opposition Critic for Veterans Affairs and the NDP incumbent in the newly drawn riding of Sackville–Preston–Chezzetcook, downsizing and de-personalizing face-to-face interactions with qualified case workers and service delivery personnel don’t just impact veterans' mental well-being and quality of life; they play into a larger Conservative mandate of knowingly delaying and denying services to veterans.

Under the “New Veterans Charter” of 2005, the Conservatives have increased funding to Veterans Affairs Canada by over $800 million, from $2.8 billion per year in 2005-2006, to $3.64 billion per year in 2013-2014. The Conservative Party has touted this as a point of pride. But there’s a bottleneck, says Stoffer, when it comes to accessing those funds.

“People within the department have been advising me that high-level staff at Veterans Affairs have instructed them not to inform veterans of all the benefits available to them,” says Stoffer. “So you could put $25 billion into Veterans Affairs tomorrow. If nobody can access it, it doesn't matter.”

Veterans Affairs has returned over $1.1 billion in lapsed funds—money that could have been made available to veterans—to the Treasury Department since 2006. To Stoffer, this is budget-balancing on the backs of veterans, and a clear sign of the “Three D” mandate of the department: “Delay. Deny. Die.”

“If the government had allocated those funds in a generous manner and just listened to their own words, we wouldn't be having this conversation,” Stoffer continues. “Instead, they did it in a cheap way, so now Anybody But Conservative campaigns start up.”

In this election campaign, Harper is working to give an impression of the Conservatives as the party that’s the most war-ready, most anti-terror and most appreciative of Canada's military history. According to a Canadian Press story that came out yesterday, the Conservatives are actively searching for a few good veterans who will talk about “why Harper is the best choice for Canada” in an advertising counter-offensive to the PSAC message that “the NDP and Liberals are the best for Canadian Armed Forces Veterans.”

But Harper’s actions may speak louder than ads. The growing dissent of still-living veterans disillusioned with the sub-par treatment they’re receiving post-service is what Clarke and the Anybody But Conservatives veterans' campaign want voters to bear in mind.

“Harper's being tough, mouth-wise, and he's sending our troops into battle,” says Clarke. “But when they come home injured, whether it be mentally or physically injured, he has no time for us.”

“There's three things to remember,” says Stoffer. “Number one, for veterans every day is Remembrance Day. Number two, you should never regret getting older, because so many don't have that privilege. And number three, I've never had a veteran come to me and ask for a Rolex. They come to me asking for help getting a hearing aid, for eye care, for help organizing trips to access medical care.”

The Conservative Party of Canada did not respond for a request for comment on this story.