Last week Halifax hosted its first all-candidate debate of this federal election, but not all candidates were in attendance.

The YWCA (and a host of other community groups) organized a debate at Spatz Theatre last Thursday evening to discuss the issues affecting Canadian women going into this fall’s election. Incumbent Megan Leslie (NDP), as well as challengers Andy Fillmore (Liberal), Thomas Trappenberg (Green) and Allan Bezanson (Marxist-Leninist) were all in attendance before a crowd of 400 interested voters.

One Halifax riding candidate who missed the evening’s debate was Irvine Carvery. Organizers from the YWCA have claimed Carvery was informed of the debate several months in advance, but the Conservative nominee was busy attending an Africville Genealogy Society meeting.

Still, as the local (unelected) representative for Canada’s current government—and given the plethora of criticisms against Stephen Harper during the evening—it would have been nice to have Carvery in attendance to discuss one of the issues the Conservative party has taken such heavy criticism over.

So, I took the debate to the candidate. Despite a national trend of Tory candidates ignoring the media, Carvery was more than happy to answer the debate’s questions—albeit, a few days after the event itself. Since no one could interrupt or fact-check anyone else’s statements during the debate, I let Carvery have his unedited say on each question posed to the other candidates. Most of those questions have been condensed here, for clarity. Some thoughts on his answers follow.

1. How will your party act on the recommendations of the United Nations and deal with high numbers of missing and murdered aboriginal women?
“Well, you know, this is my opinion, this is the way I feel on that: We are already well aware of the conditions that cause aboriginal women to be in vulnerable positions. What I would like to see happen is, rather than an inquiry, I think we should cost out what it should cost for an inquiry and use that money to convene a council of First Nations—for the First Nations folks to come up with their own recommendations in terms of addressing the social conditions that we find on-reserve and off-reserve that cause First Nations women to be in such vulnerable positions in the first place.”

2. How do you and your party intend to address the ongoing domestic violence experienced by women?
“In that area, funding needs to be in place to assist with shelters for women who find themselves in that situation. More importantly, I think we really need to invest in terms of education, in terms of making this more widely known too, because women get into a situation where they don't have the information that's readily available that can get them out of that situation. So I would like to see us invest in transitional homes, but also at the same time do an education blitz in terms of assisting women.”

3. What steps will your party take to address the high level of risk of poverty for women, particularly in marginalized groups like African Nova Scotian women?
“I'm glad that question was asked. Here in Halifax, we make up 3.6 percent of the total population in Halifax and yet we account for 7.7 percent of people living in low income. Of the total number of people living in low income, 37 percent are women of African descent. Again, there is no quick fix to these problems. We need a holistic solution, beginning with early childhood education, through the education system, job training, job opportunities for—particularly for—women of African descent here in Halifax, to draw them out of those poverty lines, because of the single family homes, the vast majority are headed by women. So it just doesn't impact on women alone, it impacts on families. We need to take steps to address that issue.”

4. How do you intend to ensure youth, particularly young women, will be free from debt and able to stay in Nova Scotia?
“When we look at post-secondary education, our party has taken steps to reduce the dependency on grants for students, we've made it more accessible for students. But I think more importantly, we need to create jobs for those students who are graduating to remain here in Nova Scotia. In particular, our support for small business. We will be reducing the small business tax to historic lows—from 11 percent to nine percent—and to allow small businesses to reinvest into their businesses, provide more jobs, more opportunities for students graduating.”

6. What will your party do to ensure access to housing for low-income women and families?
“I'm a strong believer in affordable home ownership. I believe that—particularly here in Halifax, when we look at the Gottingen Street area—there is an oversupply of low-income housing in this area. I think that we as a government need to start looking at being able to build affordable homes for people actually to purchase, as opposed to renting. Along with our economic job strategy, that's a very important piece of the puzzle in terms of economic growth for people living here in Halifax.”

8. How will your party help those people, particularly low-income women, who are taking care of aging parents?
“Our party has already put in place tax measures and staff for those people who are caring for the elderly to get tax relief, to be able to do that. We have introduced a program for aging people living in their homes—tax-free for them to retrofit their homes as they age so they can remain in their homes. So we believe those are the types of steps that will assist families in terms of their care for elderly.” 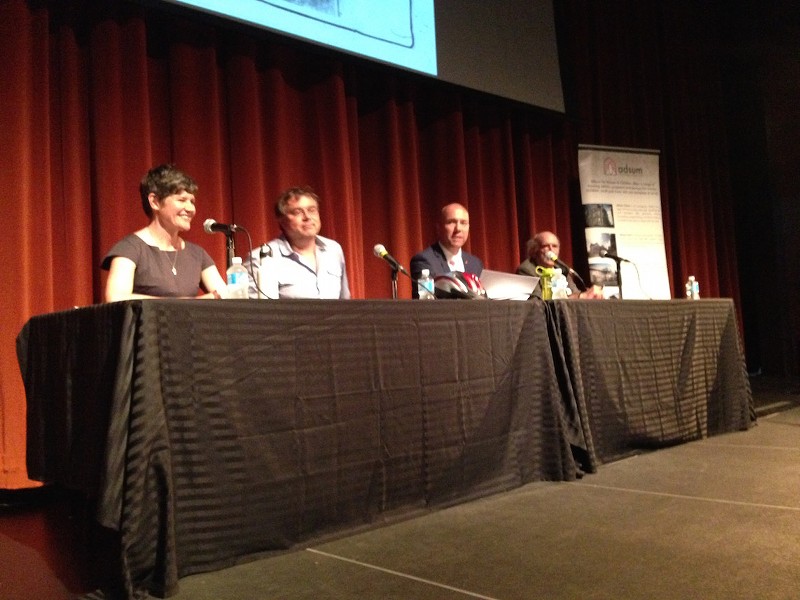 So, a couple things. As might be expected, Carvery’s answers are enshrouded within economic spin. That’s the battle the Conservatives have been fighting even as the Canadian economy takes it on the chin. Besides, the answers last week from most of the candidates in attendance were almost all framed around economic issues. The notable exceptions included the topics of First Nations women and access to abortion.

Every candidate on stage last Thursday vehemently declared a public inquiry was needed into the staggering amount of missing and murdered aboriginal women. But Carvery toes the party’s line here in stating an inquiry isn’t needed to take action.

It’s the same story with access to abortion. Carvery quotes from the Conservative playbook, assuring voters the debate isn’t going to be re-opened. But that's not the issue everyone else is talking about. The other candidates last week were more outspoken that current legislation doesn’t work for Canadians in rural areas. Megan Leslie promised an NDP government would sit down with provincial governments and find out what the hell’s happening in PEI. Andy Fillmore took a softer approach, but still maintained a Justin Trudeau government would fight to ensure all Canadian women had better access than is currently found in some parts of the country.

Where Carvery’s breaks some from Conservative talking points is his direct stance on closing the gender wage gap. It’s good to hear, given how Canada’s income inequality has widened under Harper’s reign.

That said, credit to Carvery for doing what so many of his fellow Conservative candidates seem to be avoiding—answering questions from the media. He says he’s received no instructions from Ottawa not to participate in debates or take interviews. Of course, given the Tories aren’t expected to pull out a win in this traditionally strong NDP riding, he doesn’t have much to lose in speaking his mind.

The next public discussion between candidates will be the “Halifax Federal Candidates Forum for Downtown,” organized by the city’s business commissions, Fusion Halifax and the Chamber of Commerce. That event will take place this coming Monday, September 21 at Neptune Theatre and feature Halifax and Dartmouth-Cole Harbour candidates from the NDP, Liberal, Conservative and Green parties.

If you want to hear more about where local candidates stand on women’s issues, the YWCA has sent more than 70 audience questions (none of which there was time for at the debate) to the candidates. We’ve also embedded them below. The answers will be posted online once received.