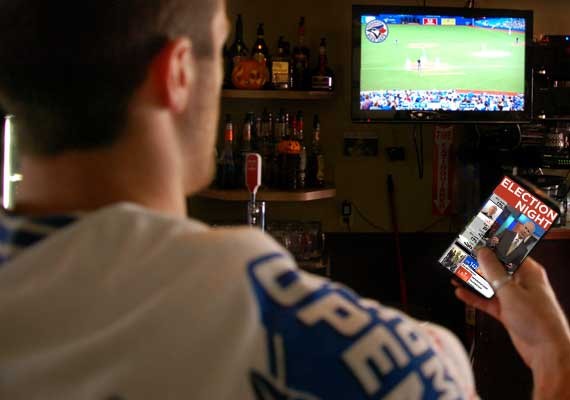 Monday night in Canada will be one of the most important evenings for the nation in recent memory. And also there will be an election. While the Toronto Blue Jays take on the Kansas City Royals in game three of the American League Champion Series, some people will instead be looking to find out who forms the country’s next government.

Political nerds in Halifax without their own televisions are in luck, as several local venues will be broadcasting all the action Monday night. Starting when the polls close at 8pm 8:30pm, Good Robot Brewing Company will be hosting the Jolly Caucus Race—Election Night Driveway Shindig.

“Justin time for those who Muclair [sic] about Canadian democracy, and are tired of Harpering on about the current state of affairs, comes an event that May quench your thirst,” reads the event description.

Voters can head over to 2736 Robie Street at 8pm for “locally brewed beer and federally brewed drama.” Halifax Press will be on hand grilling sandwiches.

University students, meanwhile, will be able to attend several election night parties on the peninsula’s campuses. A vote party will be held at the HMCS King’s Wardroom (6350 Coburg Road), Dalhousie’s Grawood (6136 University Avenue), Vinnie's Pub at MSVU (166 Bedford Highway) and the Gorsebrook (923 Robie Street) at SMU. All four events will get started at 8pm, but are limited to students and their friends.

For every other venue, it really depends on the number of TVs and how the Jays are doing. Staff at the Resolutes Amateur Athletics Club (5461 Inglis Street), Freeman’s Little New York (6092 Quinpool Road), the The Fickle Frog (5675 Spring Garden Road) and Niche Lounge (1505 Barrington Street) all confirmed over the phone that election results would be broadcast on at least one television (should any patrons ask). The Mayflower Curling Club (3000 Monaghan Drive) will also be screening live results in their upstairs lounge.

Gahan House (1869 Upper Water Street) was planning to broadcast election results Monday night on their three TVs and in-house audio system—until The Coast reminded them about the Jays. After a quick consultation with staff, manager Isaac said he’d have to call us back. Like any other bar, it’s probably best to call ahead to Gahan if you’re planning an election outing.

One pub that definitely won't be watching Canada's next government form is Bubba Ray’s Sports Bar (5650 Spring Garden Road). “It’s going to be hard to pull it off,” said one staff member, who reports it’s standing room only when Toronto plays. It's the same story from employees at Your Father’s Moustache (5686 Spring Garden Road), who say they only plan to play the big game Monday night. “We’ll make more money off of that.”

The Kansas City Royals take on the Toronto Blue Jays in Game 3 of the American League Championship Series Monday night at the Rogers Centre, starting at 9:07pm. Polls close for Canada’s 42 general election at 8pm 8:30pm. Results will start trickling in from coast to coast over the next few hours, until a winning party is announced and a ceremonial bat is flipped.

All of CANADA STILL. https://t.co/bGMRSvGVwL