What’s that noise at night in the north end?

Rivet busting echoes out across the water. 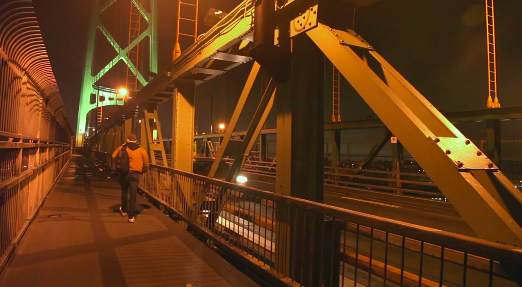 Insomniacs and those wandering home from the bars may have noticed some odd noises in the north end lately. A soft jackhammering has been drifting across the waves, carried along by the cool summer air and caused by continual Big Lift work on the Macdonald Bridge.

“We have started rivet busting, which is loud, as you can imagine,” says Allison MacDonald, spokesperson for Halifax Harbour Bridges. “What they’re doing is breaking off rivets that have been there for 50, 60 years.”

The noise has already been noticed in Dartmouth, but now the work is steadily making its way across the harbour.

As we’ve written previously, the public has been told to sleep with windows closed, a fan on for background noise and as far away from windows as possible to avoid disturbance.

Big Lift workers are using a “helldog” for the busting, which is a tool specially designed for large rivet and bolt cutting on bridge decks. The Thor RB-11 model of helldog is described here with uncomfortably sexual terminology—including its 11-inch stroke, a “teasing throttle for exceptional starting and control” and how it can produce 850 blows per minute.

The early-morning busting will continue for the duration of the Big Lift, which won’t be completed until fall 2017.

“It’ll stop, then it’ll start again,” Allison MacDonald warns of the noise. “It’s one of those things that’ll be on and off over the next while, the next 18 months.”