Pathetic, dumb and dangerous: The Proud Boys make their debut in Halifax 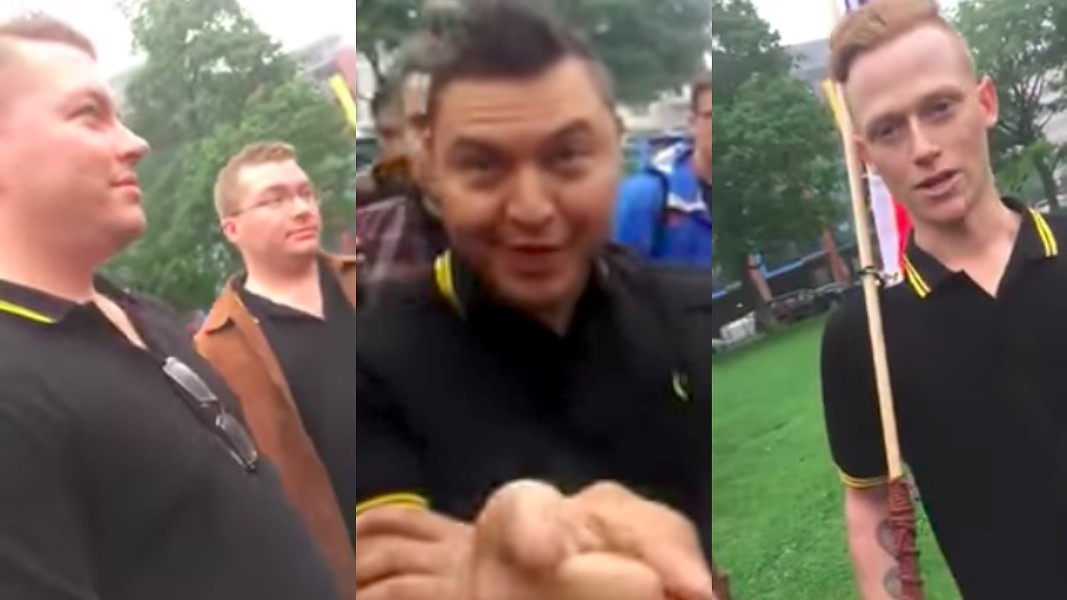 On July 1, a group of Indigenous activists and their allies gathered at the statue of Edward Cornwallis that inexplicably still stands in downtown Halifax to commemorate and mourn the genocide of Canada’s First Nations. In the midst of the sombre ceremony, a group of five idiots in matching polo shirts showed up singing, waving a Red Ensign flag, trying to instigate a confrontation. They stuck around for less than 10 minutes and then went to a local bar to pose for photos, post on the internet and drink some beers. This is Halifax’s introduction to the dumbest and most contradictory sub-sect of the dumbest corner of the internet: the Proud Boys.

Self-proclaimed chauvinists, the Proud Boys were founded by disgraced VICE Magazine co-founder Gavin McInnes, a man whose greatest contribution to western culture is that magazine’s “Dos and Don’t” column—ostensibly a street fashion/photography column that was in practice little more than a thinly veiled excuse to roast drunk 20-something men and ogle teenage girls. Since being forced out of VICE, McInnes now writes and creates videos for Rebel Media with titles like “10 Things I Hate About Jews.” His Proud Boys dress like 1970s skinheads and require members to abstain from masturbation to conserve energy and precious bodily fluids. Joining the frat/proto-fascist brigade involves being slapped by your bros while reciting the names of five breakfast . Their name is derived from a song in the live-action version of Aladdin that was so shitty it got cut from the cartoon version. There’s a not-entirely-unaware childish, comic element to the subculture these idiots have attempted to forge.

But there is a darker, more dangerous element underneath the irony and stupidity. In April, the Proud Boys announced plans to begin training and a paramilitary wing called the Fraternal Order of Alt-Knights, to be lead by a violent petty criminal named Kevin Chapman. If these can get their act together North America’s revanchist right will soon have its own to break up liberal and left protests and intimidate political foes.

Last month Irish writer Angela Nagle published Kill All Normies, her deep dive into the rise of the so-called alt-right and its move from internet subculture to fractured but effective real-world political movements. One of Nagle’s most useful insights is to tease out the ways in which groups like the Proud Boys not only use irony to dodge any criticism from outsiders but also to numb themselves from the real world repercussions of their actions. Proud Boys rose from the same hysterically aggrieved internet sub-culture that gave us Jeremy Christian, Elliot Rodger and David Kalac.

It is important to make clear that their attempt at transgressing social norms by calling for archaic gender roles and celebrating an ahistorical idea of western culture does not on its own make these idiots dangerous or even interesting. Their attempts at humour and freshmen understanding of intellectual history are childish and boring and they’re more of an annoyance than truly offensive. By adopting a pastiche of the greatest hits of 20th-century European reaction they’ve constructed the blandest possible politics.

Instead, the danger lies in formations like the Proud Boys using irony to right-wing street politics, using irony to cover truly dangerous political positions and recruiting teenage jokesters into a fascist milieu where more extreme and less cowardly are waiting.

The Proud Boys are disaffected, stupid, bitter and think street violence is a game. They’ve latched onto a cartoonish version of western chauvinism to justify xenophobia and reactionary cultural politics. We should laugh in their pimply faces. But at the same time, we should that disaffected, stupid and bitter men in search of meaning have always served as the fighting arm of fascism. We should take them just seriously enough to make sure that July 1 was the last time they leave the internet and hit Halifax’s streets.