When rates of women in our prisons are rising, things must change. 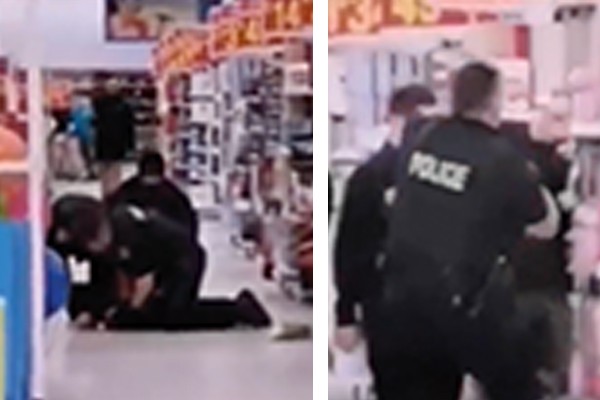 Indigenous, Black, people of colour, trans and nonbinary people have been calling this out forever, but the outrageous violence Santina Rao experienced at the hands of police last week has to be the last straw for Halifax's tolerance of police brutality in our communities.

There is simply no possible way to justify an officer punching a mother in the face in front of her toddlers.

Yet a few are entering the comments section to say she should have acquiesced, just done whatever they demanded, to avoid the fight. That now she bears some guilt. But her actions, to stretch her hands out and put herself between them and her kids, were pure protective cortisol.

When such intuitive defence happens in the movies, it is heroic and lauded. When it happens in Walmart, it gives the police a veil of legitimacy for uncontrolled and unlawful reactions. Let's see through this.

Unwarranted and illegal street checks allow police to later say so-and-so is known to police, designating the person as other, not ours, criminal. Well, we are all criminals. My children eat unwashed apples as we walk through the grocery aisles and I jaywalk every day.

Some of us get punished, some of us do not. We have plenty of painstakingly researched and beautifully written analyses of racism and policing in Nova Scotia and across Canada by El Jones, Desmond Cole, Robyn Maynard and others. We do not need to wait for any more information, or to hear from both sides. State violence does not get the benefit of the doubt. These platitudes subdue us out of moral righteousness, action and change.

And things must change. Our prisons are full of women, rates rising speedily and disproportionately among Indigenous, Black, women of colour, trans and nonbinary people. All who clapped back, lashed out against threats: the threats of poverty, violence, unaddressed and untreated sexual assault and criminalization of substance use. At what cost does this punitive state reaction to women's strategies for survival come? The criminalization of women breaks apart families and traumatizes generations. The colonial foster care system is stretched to breaking from racism and removals of Black and Indigenous children. Cities are in crisis as trauma and a poisoned opioid supply kill thousands. As we watch the video of Santina Rao's experience, we ask, "Who are we protecting through incarceration, when police perpetrate such violence?"

We know who our true protectors are. On the east coast this week it was the bravery of Santina Rao. On the other side of the country, fearless grandmothers are placing their bodies in front of RCMP to guard the earth at Wet'suwet'en. In every place in between, folks are holding marches, rallies and fundraising auctions. As civil rights advocate Michelle Alexander wrote on Friday, "a politics of deep solidarity is the only politics that holds any hope for our collective liberation."

A grapefruit in a stroller is not and never was a problem. It is clear from the police's actions that we do not have their support in the real struggles in our communities. The solution is not more police or more tools of policing, whether they be security footage or body cams or tanks. We need confidence in our collective solidarity to support our communities against the threats of white supremacy, child poverty, the overdose crisis, corporate greed, climate apocalypse and enduring violence against women.

Drop the charges against Rao. Compensate her generously. Hold the officers accountable. And never let this happen again.