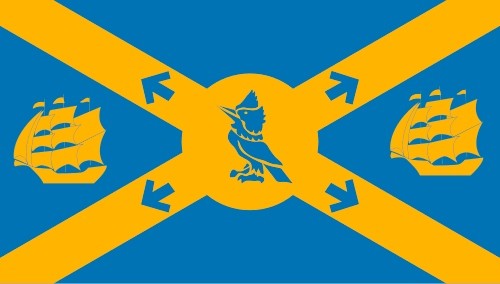 You can go out and buy the Maple Leaf flag, the official flag of Canada, and then insult it in any number of ways---burn it, flush it, fly it upside down, whatever---and suffer only the loss of personal reputation. But, should you get ahold of the official flag of the Halifax Regional Municipality and proceed to dis it, you could be fined $500 or thrown in jail for 30 days, for each said offence.

Welcome to the murky legal world of heraldry. Most people didn’t even know the city had a flag until Tuesday, when city council approved “housekeeping” amendments that straightened out some conflicting bureaucratic code related to it, agrees city clerk Cathie Mellet. The flag corresponds to heraldry that was adopted when HRM was formed---it contains at its centre an odd bird; four arrows emanate from the bird, suggesting perhaps that it be drawn and quartered or maybe exploded, as two ships look on. Mellet has no idea what the symbolism means.

The intent of the amendments is to make it easier for the public to purchase the flag, but the language about disrespecting it was inserted at the insistence of the city’s legal staff. Who defines what “disrespect” means? “Well, that’s just it,” says Mellet. “It’s unlikely we’d actually prosecute someone.”

The Flag Shop in Dartmouth makes the flag for the city, says manager Carol Aylard, but is waiting for further instructions from the city before selling directly to the public. The store has yet to determine what the flag will cost, but the flags for the former cities of Halifax and Dartmouth cost $79.95.