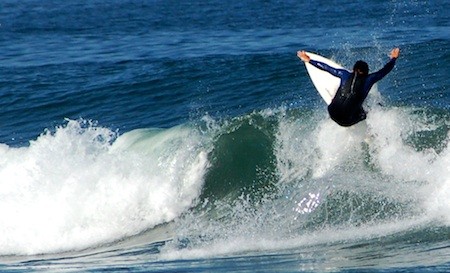 Halifax council last week voted unanimously to give $145,000 to O’Neill, a Santa Cruz, California-based surfwear company that sponsors a “Cold Water Classic” surfing competition, to be held this September in Cow Bay. (See here and here for more on this issue.) Council approved the expenditure even though the local surfing community is largely opposed to the event.

Local surfers express a range of concerns. For one, O’Neill did not approach the main local surfers' group, the Surfing Association of Nova Scotia, about the event. They also say it is unlikely that there will be good waves in September, and that the water that time of year is far from cold---in fact, water temperatures are often above 20 degrees.

But of biggest concern is the effect the competition will have on local surfers’ relationship with the Cow Bay community. Cow Bay has the most spectacular break in Nova Scotia, a place called “Minutes,” a few hundred metres to the north of the moose sculpture on Cow Bay Road. For many years a nearby property owner was surfer-friendly, and surfers could park and transverse his land, but after that property changed hands, surfers were accused of trespassing and other disruptive behaviour. To their credit, surfers then began self-policing and looking for ways to build positive relationships with the neighbours. The result is a new access park, created with help from a surfer-led organization called the Coastal Access Committee and paid in part with surfer donations. Now, however, O’Neill is suggesting that 20,000 spectators could descend upon the community.

“The impact on the community is a big concern,” says surfer Iaian Archibald, who has been heavily involved in surf access issues, but makes clear that he is talking only for himself, and not for either the Coastal Access Committee or for SANS. “As you know we’ve spent a lot of years building good will through coastal cleanups, self policing the surfing community, working with the Cow Bay community to build the Silversands park and most recently the development of the Minutes Access Park. Whatever happens will directly affect that good will.

“Ultimately whether the local surfing community is involved in this contest or not, and we certainly are not right now, we will have to wear the outcome," continues Archibald. "Furthermore if this happens like we expect it to---no surf---how is this going to affect us when we approach the city or province to help us fund local contests or recreational infrastructure?  As a community this could really impact us negatively for years to come.”