Decisions made starting this month will determine the future livability of HRM.

September 12, 2011
31 comments
The widening of Bayers Road is not just a bad idea, it's a horrific idea.

Quite literally, if the Bayers Road/102 widening project moves forward, it will utterly destroy any hope that HRM will ever have an effective transit system. It will cost us about a billion dollars for construction, then untold billions more to operate the thing, money exported right out the province, year after year after year, assuming we can afford it in the first place.

In short, the Bayers Road project is a make or break moment for the province of Nova Scotia and the city of Halifax and its suburbs. We either kill this project now and adopt sensible transportation policies, or we lose the possibility forever.

Bayers Road widening has been talked about since at least 2006, when it was incorporated in the HRM Regional Plan. But we need to understand that the project is much, much larger than simply the stretch of Bayers Road between Windsor Street to the beginning of Highway 102; in fact, from a conventional traffic engineering standpoint, there's no sense in widening Bayers Road unless the rest of the project also proceedss--- that is, the widening, rebuilding, realignment of Highway 102 from Bayers Road, up past Bayers Lake, around Bedford and all the way up to Exit 5 in Waverley. It assumes that highway 107 in Dartmouth will be extended (the so-called Burnside-Sackville Connector) to Highway 102 near Duke Street, or more likely, to Highway 101 in Sackville, and it assumes that a highway 113 will be built from Bedford to Tantallon.

The traffic engineers want to widen Bayers Road because widening Highway 102 will bring so much traffic onto Bayers Road that it will have to be widened as well.

Here's a map of the entire project: 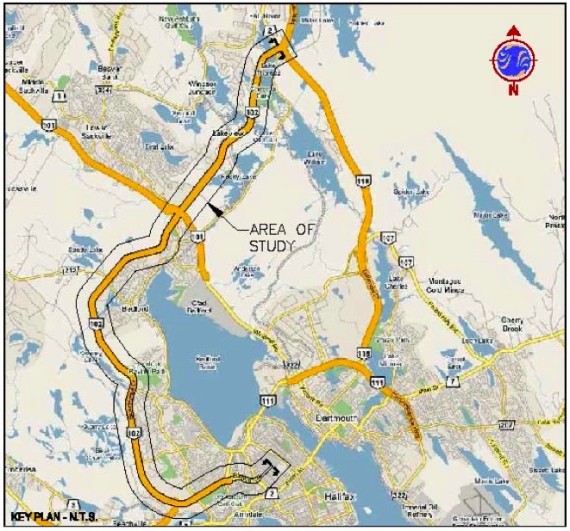 The province is the lead agency on the 102/Bayers Road project. In 2009, the province contracted with Stantec Consulting Ltd. to do a "corridor study," which provided traffic projections, proposed expansions and realignments, a timeline for construction, and the cost of the entire thing: $292 million. (See the three parts of the study here, here and here.)

But wait! Stantec cautioned (page 106) that the $292 million was merely a “order of magnitude estimate" in 2009 dollars, and the firm noted that estimate does not include costs of property acquisition (which will be huge even just for the Bayers Road segment), utility relocation, taxes, engineering and “design contingencies." The estimated price tag was also based on (page L2) an asphalt price of $120/tonne and an excavation cost of $25/cubic metre; the costs of both these items have led to significant cost overruns in the past (with the Washmill underpass and Bridge Terminal, for example), and will likely continue to skyrocket in the future.

Moreover, there are additional costs of the 102/Bayers project: the costs of extending Highway 107 and building the brand new Highway 113. The province estimated in 2009 that it costs $6 million to build a kilometre of four-lane highway, and new highway intersections can cost anywhere from $50-100 million each. Highway 113 will be about 10 kilmoetres long, and have two intersections, so figure a cost of $200 million. Stantec itself put a price on the highway 107 extension (page 5.2) of $121 million, with similar cautions that re-locating utility lines, buying land, etc., were not factored into that figure.

There are still bigger costs: the costs of bringing more traffic onto side roads. As Stantec explains (page 5):

In other words, the expanded roadways will bring a lot of traffic onto adjacent streets--- think Young, Gottingen, Windsor, Oxford, Lacewood, Kearney Lake, Duke Street, etc.---and a lot of money will have to be spent expanding those streets, re-working the traffic signals, adding turn lanes and so forth. Stantec didn't even bother trying to come up with a price for all that.

We can't really say exactly what the 102/Bayers Road project will cost, but it's clearly enormous. Take the projected 2009 costs of about $300 million, add in all the engineering and land acquisition costs, normal inflation, the hyper inflation of construction costs and excavating, the costs of Highways 107 and 113 and the untold costs of dealing with additional traffic on other streets... and a $1 billion price tag looks like a realistic ballpark figure for the entire project.

By way of comparison, so far in Nova Scotia history, the most expensive public works project has been the Harbour Solutions sewage project, which came in at $330 million---the 102/Bayers project is three times as large.

I attended a public workshop on the 102/Bayers Road project in early 2009. As I reported at the time, city traffic planning guru Dave McCusker said that the widening "wouldn't likely happen within the next five years, but on the other hand it would likely happen within the planning 'horizon,' which extends all the way out to the year 2036." (I'm quoting myself, not McCusker.)

But here's a bombshell in the Stantec report: They want construction on Bayers Road to start in 2014--- just three years from now. The timeline for various portions of the expansion are shown here:

I'll mostly leave a discussion of the study's traffic projections for a future post (and about lane configurations and what the widening means for the adjoining neighbourhoods), but for now let's look at how Stantec simply dismisses transit with a shrug (page 17):

That 'future phase" of the study examining transit does not exist. So far as Stantec is concerned, absolutely no one new will take transit between now and 2036, even though that assumption is built into the city's regional plan.. Also, no one new will bike or walk to work. All residents of HRM will be car commuters, forever into the future.

Well, this may in fact be true. You see, a billion dollars is, well, a shitload of money. A billion dollars spent on expanding roadways is a billion dollars not spent on transit. And it's not like we've got lots of stacks of billion dollars bills sitting around and can build both highways and transit: it's either one or the other. And of course, building superhighways makes transit comparatively non-competitive, at least in immediate per trip costs to commuters (albeit not in true costs).

To its credit, Halifax council has been taking a second look at transit options, including a commuter rail line, along the west side of the Bedford Basin, connecting Bedford and Clayton Park to downtown. The initial study for placing commuter trains on the rail line between Windsor Junction and the Via Rail station downtown, with intervening stations at Sackville, Mill Cove in Bedford, Rockingham and Mumford, came up with a rough estimate (however, by my eyes more inclusive than the 102/Bayers estimate) of about $31 million in capital costs and annual operating costs of about $7 million. In other words, for the billion dollars we would spend on 102/Bayers Road expansion, we could operate a commuter rail system for 145 years.

But why stop there? If we've got a billion dollars lying around---and the traffic engineers apparently say we do---why not spend it instead on commuter rail, on street car lines and on extended bus service. Hell, throw in a few dozen ferries as well.

The costs of driving

There's one last issue I want to quickly raise. (I'd love to do this exhaustively, but I've kept you long enough as it is.) It's this: the on-going costs to our provincial economy of driving. It's impossible to get any exact figures here, but generally Stantec says the lane increases will allow an additional capacity of 1,440 vehicles per lane per hour. Let's assume a two-hour commuting, and we're talking, over the course of a single year, an additional 720,000 car trips, just for the commute to work and back.

Now let's assume that the average commuter will travel 20 miles each direction (I apologize for not using metric, but it's easier to do a back-of the-envelope calculation like this), and that each car will get 20 miles per gallon, and the cost of gas is $5/gallon.

Simply the costs of filling the tanks (never mind maintenance, insurance, etc) will be $3.6 million annually. That's $3.6 million, shipped directly out of province, each and every year, just for the commute along the new expanded highway. Realistically, the actual figure is probably 10 or 20 times larger, as people will make additional off-commute time trips as well.

Of course transit doesn't reduce those costs to $0 (transit needs to be fueled as well), but it does cut into it significantly. If we want to keep billions of dollars in province, spent locally and recirculating in the local economy, an excellent way to to so would be to build extensive transit operations. Not to mention that the additional money in people's wallets equates at least potentially to a higher quality of life.

I wanted to get this post up today because there will be a neighbourhood meeting on the Bayers Road expansion Wednesday, September 14, 7pm at the St Andrew's Community Centre. I strongly recommend that people concerned about the future of transit in HRM attend.