Setting out to disprove the "myth" that Halifax has the most bars per capita, we find only supporting evidence.

November 23, 2011
If I've heard it once, I've heard it a thousand times: "Halifax has the most bars per capita of any city in Canada." 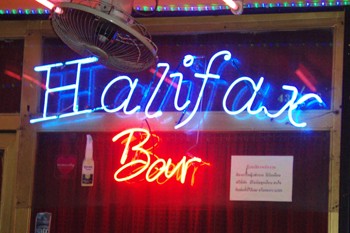 I gotta say, though, that I've always thought that was probably bullshit. Here's my thinking: this town lacks the small neighbourhood pub culture found in Britain and many American cities I'm well familiar with---in fact, it's straight out illegal to open a pub in much of this city. Instead, we favour the large, mega nightclubs: The Palace, The Dome, like that. Obviously, or at least so it seemed to me, if we have a few giant clubs that hold a lot of people instead of lots of tiny pubs that hold a few people each, than we'll have fewer, not more, bars per capita.

So I did some research. I called the Alcohol and Gaming Commission of Ontario and its counterpart here in Nova Scotia to find out how many liquor licences are found in the city of Toronto and urban HRM respectively. For HRM, they drilled down and gave me the figures for licences in areas with a Halifax or Dartmouth civic address---that is, the old cities of Halifax and Dartmouth. For Toronto, it was within the Toronto city limits. "Licences" in both cases was broadly interpreted, including bars, cabarets, hotel bars, clubs, etc. I pulled population figures off the web. The results:

I'm the first to admit there will be problems with the statistics---how do you judge population, are the urban/suburban lines comparable, etc---but the ratios are so very different that I think it's safe to say Halifax is clearly in an entirely different strata than Toronto when it comes to drinking establishments.

I suspect I brought an American bias to my preconceptions. I know that the American bar culture is very distinct, and very different, from Halifax's bar culture. Of course, there's the rest of Canada---Montreal, not to mention St. John's... readers are more than welcome to come up with their own stats and post their findings in the comments.

For myself, it's just good to know my instincts can sometimes be entirely wrong. A good lesson. That of course is why we should aim to support our views with real evidence.