The Chronicle Herald gets it all wrong

Attempt to criticize The Coast's article about Cobham relies on mischaracterization and easily verifiable falsehood.

April 06, 2012
There's nothing wrong with one newspaper criticizing another, and certainly I think The Coast is as open to critique as anyone else. Still, it would nice if criticism thrown our way at least pretended to adhere to the fundamental tenets of journalism.

At issue is a Chronicle-Herald article published late Thursday, following up on my Thursday feature article on layoffs at a Dartmouth firm called Cobham Tracking and Locating, headlined "From Nova Scotia with love." As the subhead for that article explains what it's about:

Canadian taxpayers spent millions of dollars to help grow two companies that make some of the best spy-tech gear in the world. But a multinational firm bought the locals, and is now sending those good Dartmouth jobs to the United States.

But Chronicle-Herald reporter Bruce Erskine misrepresents what's in my article when he writes about his interview with Cobham spokesperson Monica Hallman:

Hallman said the layoffs were not coincidental with a $500,000 ACOA loan to the company, as suggested in the Coast on Thursday, since that loan never happened.

I realize it is Hallman, not Erskine, making the accusation that I "suggested" the layoffs were "coincidental with a $500,000 ACOA loan," but these are Erskine words, and fairness would dictate that he correct Hallman's mis-characterization of my piece. In fact, I properly reported that the $500,000 ACOA loan never materialized, and I never suggested there was a connection between a possible loan and the layoffs. Here's what I wrote:

There's some mystery concerning the $500,000 ACOA loan that insiders say was announced in the company's Burnside office this January. The Coast began trying to verify the existence of the January ACOA loan a few weeks later. ACOA will not say one way or the other whether it loaned or intends to loan Cobham money this year.

"ACOA cannot speculate about projects that may or may not be under evaluation, until a final decision is made and a contribution is publicly announced," ACOA spokesperson Chris Brooks says. ACOA does not make such loans part of the public record until 60 days after the loan is finalized.

And this Tuesday, Cobham spokesperson Monica Hallman told The Coast that indeed Cobham "looked into ACOA funding several months ago," but "we have not received any funding, and are not currently pursuing any funding from this agency."

The company insiders, however, insist that an announcement of an approved ACOA loan was made January 6. It's unclear what happened with regards to ACOA and Cobham in January. Perhaps the insiders have the story wrong. Or maybe The Coast's questioning somehow derailed a pending loan. Or it could be that Cobham pursued a loan but then rejected the idea for business reasons that have nothing to do with ACOA.

Any literate teenage reading this would understand that the loan never materialized. I tried to verify the existence of the loan, was told it was not made, and offered three possible explanations as to why employees were told of a loan but it never came about.

The only way I could see how Erskine could so badly screw this up is that he is conflating the next paragraph with the preceding paragraphs:

Regardless, the company definitely did receive an ACOA loan, also for $500,000, in 2008. According to ACOA documents, that loan was intended to "acquire new equipment to commercialize new product line." ACOA won't say, precisely, what the equipment was or if the product line came to fruition. That loan, says ACOA spokesperson Alex Smith, "is being repaid by the company." Smith will not say how much of it has been repaid and how much is outstanding.

But again, anyone with reading comprehension beyond that of a snail would understand that I'm talking about two different ACOA loans in the amount of $500,000--- one that was made in 2008, and one from earlier this year that was investigated and announced in the company office, but which never materialized.

She said Cobham hasn’t received ACOA funding and didn’t know if its predecessor companies in Nova Scotia had.

This is just flatout wrong, and bad reporting.

Readers can look up the 2008 loan from ACOA to Cobham themselves, on the ACOA project information search site. Type "Cobham" in the "client name" field and hit search, and the following result pops up: 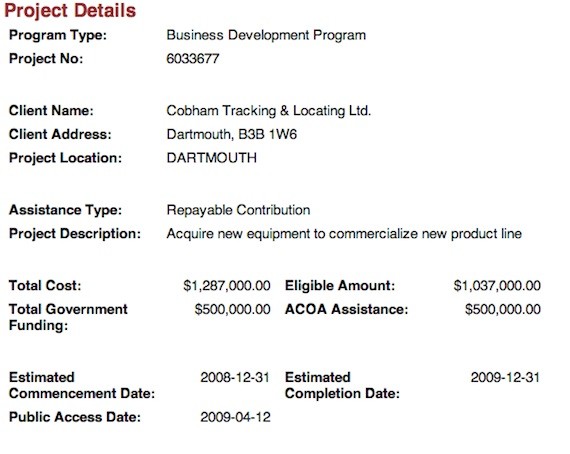 The 2008 ACOA loan to Cobham actually happened, and yet Erskine quotes the company spokesperson saying the company never received any money from ACOA. It'd be one thing if this was some obscure bit of information, but the quote is easily verifiable, on a website that any business reporter in Atlantic Canada should have bookmarked and use on a regular basis, and yet Erskine doesn't correct Hallman's misstatement. Instead, he quotes it approvingly, in what amounts to a half-assed attempt to criticize The Coast.

Properly, the Chronicle-Herald should correct the record.