Iconic bit of Halifax history appears to be lost forever—or maybe not? 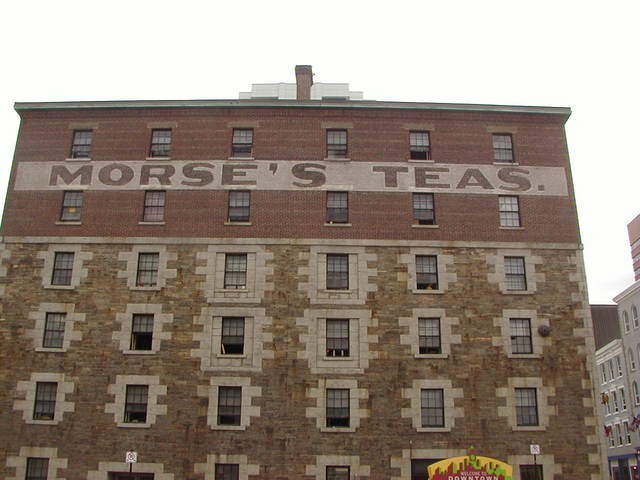 Update, 2pm: Andy FIlmore, who until recently was the city's director in charge of HRM By Design and is now the director of the Dal department of Planning, leaves the following comment on my Facebook page:

There's no story here. It being repainted exactly as it was, for future generations to enjoy.

I'm waiting for more information on this.

The Twitterverse began announcing yesterday that the iconic Morse's Teas sign on the historic building at the entryway into downtown was being painted over. I went today to investigate, and found a single worker on a giant cherry picker definitely paining over the sign. It did not appear to be some sort of preservative, but rather simply white paint, obscuring the Morse's Teas lettering forever.

I attempted to interview the painter, yelling up at him, but he would not respond, ignoring me.

Later, I called the Baton Rouge restaurant, a relatively new addition to the building's ground floor, identified myself as a reporter and asked for comment. The person answering the phone directed my inquiries to the owner of the building, Starfish Properties. I kept her on the phone as long as I could, but she said she had no knowledge of what was going on with the sign. Judging from her voice, I sensed some frustration or fear; I'm not sure I believe her denials of knowledge.

Starfish Properties is not answering the phone. 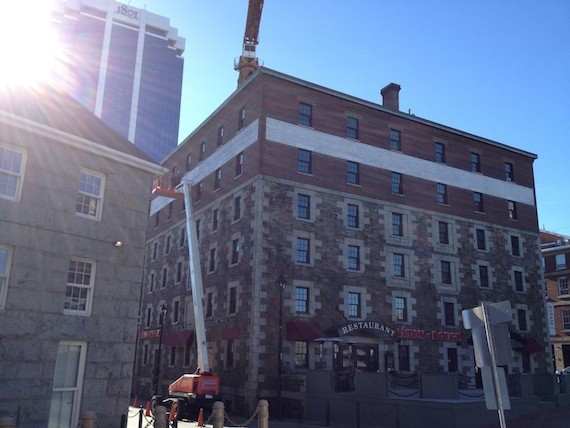 A reader directs me to the minutes of the June 6, 2007 meeting of the Heritage Advisory Committee. The committee members discussed some renovations and alterations to the building, and seemed to agree to them, but specifically said they wanted the sign at the top of the building maintained. They passed the following motion:

MOVED by Mark Pothier, seconded by Clarence Butler, that the Heritage Advisory Committee approve the alterations as outlined in the May 11, 2007 staff report, and recommend that the Morse’s Teas sign band be maintained as a distinctive feature of the building. MOTION PUT AND PASSED.

The Heritage Advisory Committee is, well, advisory. It has no force of law. I've been unable to find any subsequent discussion of the building or the sign by any other city committee, but I might be missing it.

From the outcry on social media, it's obvious that the Morse's Tea sign is (was?) loved by Halogonians.

I still have some small hope that this is somehow a restoration project, but, really, that seems unlikely. I observed the sign band being painted over completely, and the fact that this was done on the weekend with no previous public mention, makes me think Starfish knew exactly what the outcry would be and simply didn't care.

I'll update this post as soon as I have new information, probably Monday.