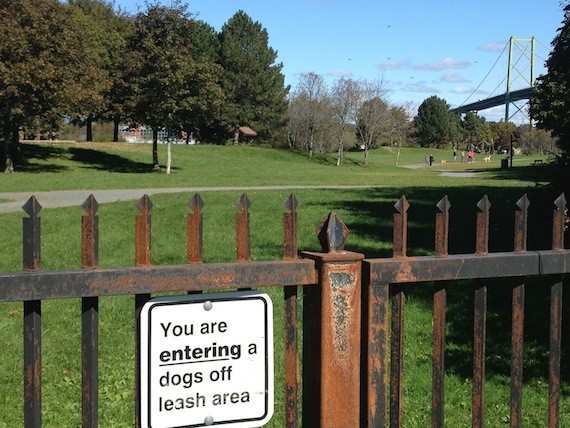 Dogs still run free in Africville Park, but perhaps for not much longer. Jennifer Watts, councillor for District 8, says the Off Leash Dog Strategy Committee will hold public consultations throughout the fall towards transferring the park by spring of 2014. A date has yet to be set for the consultations.

The former Seaview Park, was renamed Africville Park as part of the 2010 compensation package and apology for the people of Africville. The Africville Heritage Trust is working to develop the area with markers and heritage trails to honour the people who lived there. One of the oldest black communities in Halifax, residents were forced to relocate when it was bulldozed in the 1960s after decades of neglect from city officials.

Irvine Carvery, president of the Africville Genealogical Society, says the people of Africville “are adamant they don't want dogs in the park. In terms of our heritage fight, the urine and feces is disrespectful,” he says.

Joan Sinden, who writes a blog dedicated to dog-walkers in the HRM, dogkisser.blogspot.ca, says she enjoys the park as it's one of two official, permanent off-leash dog parks in the city---Point Pleasant is the other---though Sinden “always thought it was disrespectful to the people of Africville to open up the area as a dog park.” There are five other designated parks and sports fields open for unfettered roaming throughout the year.

“We don't really have an official off leash dog park that is completely fenced in---Seaview is sort of fenced in---but not fenced in all the way down to the ground for the little dogs,” she adds, offering Seaview Lookoff as a good alternative location. Seaview Lookoff is up the hill from Africville Park, across the railroad tracks.

Watts says providing fenced-in areas is not part of the strategy because dogs must always remain under their owner's control in any event. There is, however, a fenced-in dog park for the visually impaired on Cogswell Street.