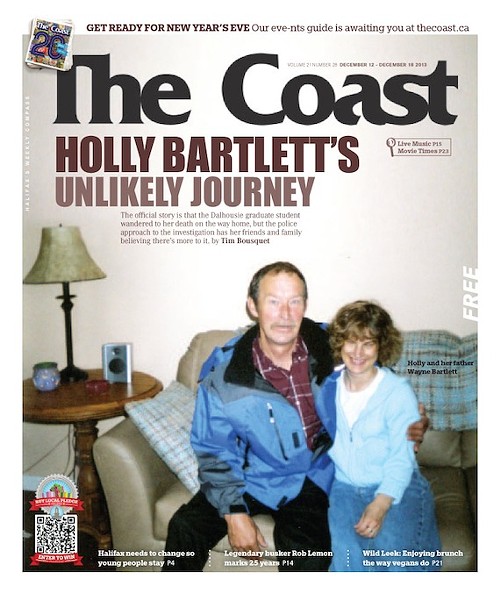 Halifax Regional Police and the Halifax District RCMP have announced an independent operational review of their investigation into the death of Holly Bartlett.

Holly Bartlett died on March 28, 2010. The day before, her severely injured body was discovered under the MacKay Bridge in Halifax. Her death was the subject of a December feature in The Coast, "Holly Bartlett's unlikely journey." The article raised serious questions about the joint HRP-RCMP investigation, and revealed new information that had not previously been made public.

Before The Coast article was published, many people were left with the false impression that Bartlett had committed suicide. A review of police documents showed that was definitely not the case. Rather, she had fallen off a cement abutment underneath the bridge. How she got there is still a mystery.

The police theory was, and remains, that Bartlett got so drunk at an end-of-term party at Dalhousie University, she wandered to her death after a cab dropped her off at her home near the bridge. The fact that Bartlett was blind played into this theory of extreme disorientation. But orientation and mobility specialists who work with the blind, and who worked with Bartlett, say the police theory simply does not fit the way blind people behave. They also told The Coast that their expert opinions into the issue were not welcomed by the police.

The review into the investigation into Bartlett's death came after Bartlett's family brought The Coast article to the attention of premier Stephen McNeil. McNeil told the family that he had read the article, and in turn brought it to the attention of Lena Metlege Diab, the minister of Justice. It's not clear if HRP and RCMP were directed to bring about a review, or if the police did so on their own account. RCMP superintendent Jim Perrinut met with Bartlett's mother, Marion Bartlett, this morning, before notifying the media. The police have asked the Service de police de la Ville de Québec to serve as the reviewing agency.

"They were chosen due to them being the closest police service with a large Major Crimes Unit and also due to the similarity in our two cities – size, proximity to major waterways, each with two large bridge structures," explains HRP chief Jean-Michel Blais in a press release.