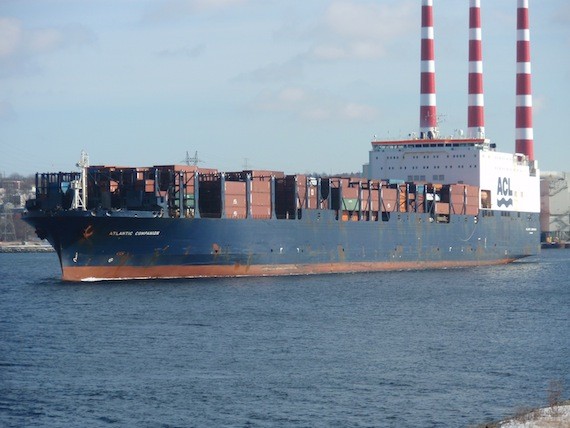 Thursday night, at about 10pm, a “flat” holding four flasks of uranium hexafluoride was accidentally dropped about 20 feet while being off-loaded from a ship at the Ceres Terminal in the north end.

A flat becomes the trailer part of a flat-bed truck when it is attached to a rig. The casks are about eight-foot long cylinders of about 30-35 inches in diameter, says Calvin Whidden, the senior vice-president at Ceres. “It’s steel, and I understand that inside the steel cover is concrete, and the uranium is in the very centre of it and almost impossible to get at.” The flat was dropped inside the ship and no other containers or flats were affected.

The Halifax Regional Fire Department was called to the scene, and port operations were ceased. Radiation levels 20 feet from the casks were measured at three to four times normal background levels. At this time, it is not believed that any of the casks were cracked, and the very slightly elevated radiation level would be expected that close to a cask. Brief exposure to that level of radiation poses no significant health risks, says John Luxat, the Industrial Research Chair in Nuclear Safety Analysis at McMaster University in Hamilton, Ontario.

While Thursday’s incident appears to be contained, it does raise issues about the transshipment of dangerous materials through Halifax ports: How do toxic chemicals get to and from the ports, who regulates the transport and are we prepared for accidents?

Hazardous materials account for less than four percent of the cargo moving through the ports, says Port of Halifax spokesperson Lane Ferguson. Hazardous materials are regulated through the Transportation of Dangerous Goods Act, which is administered by Transport Canada. That agency has not yet responded to a series of detailed questions asked by The Coast regarding the transport of uranium hexafluoride.

Whidden, at Ceres, says his crews notice similar shipments of uranium hexafluoride “two or three times a month” moving through the terminal. Thursday’s incident involved casks being off-loaded from the Atlantic Companion, a 30-year-old ship flying under the Swedish flag. The ship had left Liverpool, England on March 2, with stops two days later in both Antwerp, Belgium and Hansweert, Netherlands. It arrived in Halifax at 3:40pm Thursday. It is scheduled to arrive in the port of New York Saturday.

The flat containing the casks were to be sent out by truck. “We don’t get involved with where it’s going,” says Whidden. “The shipping line tells us to release it to a trucker, we load it on, but as a stevedore, we don’t get involved with where he’s going.” The Coast has been unable to contact the shipping company, but several sources have told us the uranium hexafluoride was destined for Columbia, South Carolina. Uranium hexafluoride is used in centrifuges used to process nuclear fuel, and the Westinghouse corporation has a centrifuge facility in Columbia.

Why wasn’t the material shipped directly to South Carolina? Whidden suspects there was some urgency in getting the uranium hexafluoride to its destination, and a truck can travel more quickly to South Carolina than the ship can sail there.

But that means a truck carrying nuclear material travels 2,500 kilometres, much of it through highly populated urban areas. What are the risks involved?

Luxat, the nuclear safety expert, says uranium hexafluoride is a solid at low temperatures, but can gassify at 56 degrees Celsius. He says the biggest threat during shipping would be a truck accident that involves a fire. But he discounts much chance of a terrorism-related incident. “The amount in a cask is very small,” says Luxat. “Even if it did vapourize and form a cloud, it would be very localized. It would present a hazard to first responders in particular.”

And the threat isn’t so much from radiation. When uranium hexafluoride is vapourized, one of its byproducts is a chemical called uranyl fluoride, which is solid particle. “If that was inhaled, you could get heavy metal poisoning,” says Luxat. “It would get dissolved in the blood. If you had very high concentrations, you could get some kidney damage.

“The other part that would present a potential hazard,” he continues, “is that it can also decompose to form a hydrogen fluoride, which is a very weak acid, but it’s corrosive, so it could cause problems to the lungs.”

There has only been one fatal incident involving uranium hexafluoride, says Luxat. That was in a centrifuge facility in Oklahoma, in 1986. There was one death from the toxic effects of the hydrogen fluoride, and 31 other workers experienced short-term kidney damage.

In Halifax, the person charged with coordinating emergency response to incidents such as Thursday’s is Barry Manuel, of HRM’s Emergency Management Organization. Manuel expresses some frustration with a lack of notification about hazardous materials. “It would be nice to know the stuff that has come through,” he says. “That way, I could plan better for it. If I know there is so much product of a certain nature coming through at a certain time frame, then I can determine that we need to have a response plan for it, and that I need to pre-position resources to deal with it.”

Manuel says that in the wake of the Lac-Mégantic disaster, Transport Canada has decided to give local emergence responders detailed information about which hazardous materials are being shipped via rail, and in what quantities, but he has yet to receive that information. There is no such directive for hazardous materials being trucked.