Yesterday was Halifax Regional Council’s last meeting of 2014, and everyone had a lot to get off their chests. Notably, the most interesting segments didn’t actually take place in council proper. Two public hearings and a committee of the whole discussion on solid waste management bookended a lengthy day at City Hall.

Around 20 people, most I assume with the Halifax Waste Resource Society, showed up for the first discussion about extending the life of the Otter Lake landfill. The city wants to keep the landfill open beyond its original projected closure of 2024. That would happen by increasing the height by 15 metres and shipping commercial-sector waste to other municipalities.

Staff told council yesterday that diverting commercial waste outside HRM could reduce what’s in Otter Lake by 50 percent. That’s not just business waste, but unsorted garbage from apartment buildings collected by private haulers. I’ve lived in a couple of apartment buildings and neither were too concerned about source separation. One didn’t even have a green bin, so tenants would put any organic waste in the same black garbage bags as everything else. The garbage room, naturally, stunk and was full of rats. I’ve heard similar stories from other people in other rentals. Which is all to say, this makes last week’s lengthy discussions about clear residential garbage bags seem not so important.

In the end discussion amongst the councillors wrapped up quickly. There were still members of the public arriving at City Hall only to find out the issue was already closed. Halifax will proceed on increasing the dump’s height, but held back on committing to keeping the site open past 2024. A potential increase in “tipping fees” for the commercial waste hauled in will go to public hearing, as will the idea of shipping garbage outside the city.

Eclipsing the Waste Society folks in sheer numbers were the 60 or so in attendance at a late public hearing on a ludicrous Wellington Street development. This is the third public hearing on the same property, which HRM staff, neighbourhood residents and the city’s own laws state shouldn’t be built. Dino Capital wants an amendment to planning regulations in order to build two towers—one eight storeys, the other 10—on a shared four-storey podium.

Just about everything to do with the design is wrong, including its massive height, its lack of setbacks and the reduced livability of having the towers so close to each other. It’s only come this far in the planning process because some on council seem to think building anything is better than building something decent. City staff even noted in their report that these plans take away the potential for better structures that could be built. That Dino wants to barge ahead with bad ideas shouldn’t be council’s problem, or the community’s.

I left last night before many of the speakers had voiced their concerns, but Ruth Davenport stayed all night and collected some of their eloquent, well-spoken points.

“The building as proposed would be monolithic, overpowering and out of scale with the residential neighbourhood on a small, short street,” said Oriel MacLellan. “The community strongly resists a repetition of earlier, outsized development such as Fenwick Tower or Peter Green hall, now widely acknowledged as mistakes.”

A similar debate sprang up earlier in the day, when councillors debated amending planning laws for an eight-storey W.M. Fares development on Maynard Street. In its submissions to council, Fares noted Maynard is “currently under-utilized.” It’s also near Agricola Street, the “vibrant up-and-coming commercial thoroughfare that is being label [sic] as Halifax’s hip spot for local art, food and business.” 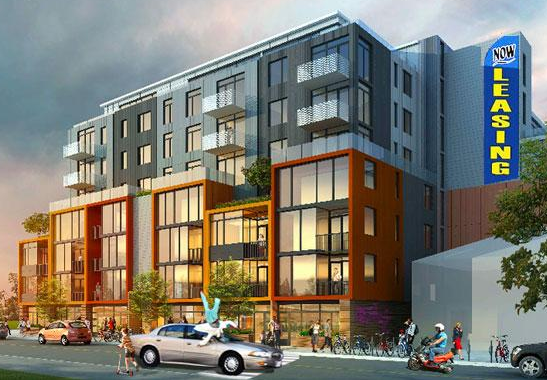 Jennifer Watts wanted staff to look at some general planning guidelines for the area, taking into context everything happening in the north end so council isn’t approving one-off developments time and again. That was unacceptable to some of her council colleagues, like Barry Dalrymple. There’s this strange belief that developers have some god-given right to build their mixed-use multi-units. Steve Craig even mentioned his displeasure that there isn’t a “standard” timeframe for the development process. But as Wellington shows, there can’t be. Controversial projects will require more discussion and elicit more response from the public, delaying decisions. That’s what should happen.

Because there were so many passionate residents speaking out last night, council deferred deliberations and a decision on Wellington Street until the new year. Hopefully the public’s words will ring in their ears over Christmas.

Before Wellington was discussed, a handful of people spoke at a public hearing regarding temporary sign bylaws. We’ve reported before on how ad hoc the current system is when it comes to show posters. Yesterday’s speakers were divided between those who poster street poles for arts and cultural events, and small-business owners worried about their inflatable gorillas. On the former, staff wanted the date the poster was put up clearly stamped and the paper to be removed five days after the event it advertised.

Some, including Josh White with Halifax Pop Explosion and musician Sean MacGillivray, tried to explain how show postering works to a never-more-aged-sounding council. White, who says he puts up upwards of 1,000 posters a week in the summer, said most of the policing tends to happen naturally. Old posters get torn down or covered up by new posters. But it’s going to be almost impossible for the city to keep track of how long every poster is on every pole, and then find the person who put it up to issue a fine.

Like the Wellington development, the actual debate and decision on the sign bylaws won’t happen until the new year.

Mayor Mike Savage offered everyone egg nog during a break in council. Jennifer Watts passed around cookies. Both were appreciated by the journalists in the room and should continue in the future.

Brad Johns wasn’t in attendance at yesterday’s meeting, as he waited patiently for his $25,000 talking Christmas tree to clear the border.

Some arguments sprung up as councillors tried to figure out who would be on what boards and committees for the next two years. Everybody wanted audit and finance. Bill Karsten got grumpy because he didn’t end up on the transportation subcommittee (his number one choice).