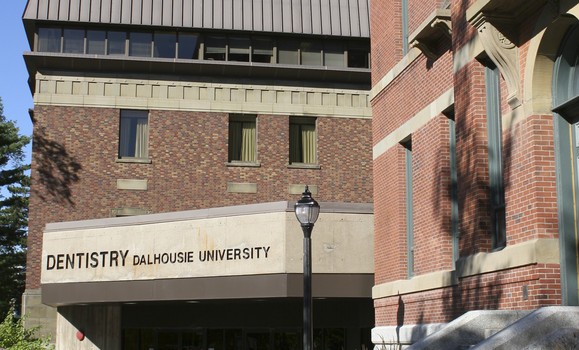 The ceaseless cascade of gross inhumanity that is 2014 just won’t let up. Dalhousie University’s school of dentistry is facing a lot of questions today after CBC broke the story of a misogynistic Facebook group of students.

At least a dozen male students belonged to the now-defunct Class of DDS 2015 Gentleman group, according to the CBC. Screenshots their reporters obtained show members polling each other about which two female students they’d most like to “hate fuck,” jokes about drugging women with chloroform and panicked posts once the group learned their published content had been leaked.

“The university does take these allegations very seriously and, as a result, we are taking steps available to us to address the matter,” he stated, adding the dental school would be canceling all remaining fourth-year exams for the month.

"Sorry, but I don't think low-brow humour in a private facebook group warrants ruining the lives of 12 men who have clearly worked incredibly hard and spent 10s of thousands of dollars on their education," reads one Reddit post on the subject. Somehow discussions are continuing online about whether it’s cool for medical practitioners to joke about raping unconscious patients.

The “boys will be boys” mentality gets trotted out a lot to excuse student behaviour, and honestly, sometimes it’s true. Remember back in January? Football players at Saint Mary’s University made the news for tweets that ranged from disturbing to just quoting bad song lyrics. It was a far cry from several years of student-body approved frosh rape chants.

By contrast, Dal’s dental school is filled with grown-ass adults who are a hair’s breadth away from being licensed medical practitioners. Dalhousie’s program is competitive enough that not everyone who gets in is coming straight from their undergrad. The four-year program is filled with students whose ages range from mid-twenties to early-thirties. The Facebook group was made for those graduating next year. It’s unlikely those men weren’t treating patients in Dal’s clinic. These aren’t dumb kids—they’re dumb adults. Adults whose daily duties involve caring for the public.

There are many, many breaches of ethical policy that the actions of the dentistry students could fall under. Dalhousie’s clinic policy and procedures manual for dental students and faculty quotes the Canadian Dental Association’s code of ethics in responsibilities to the patient:

To emphasize, the dentist's primary responsibility is to the patient. In fulfilling this responsibility, the dentist shall uphold the honor and the dignity of the profession and shall adhere to professional codes and obligations as well as the required applicable legislation.

The students’ code of professional conduct says dental students must adopt values of compassion and integrity to society, and “act in the best interest of others, do no harm.” Dentists, it reads, should represent themselves in a manner that “contributes to the esteem of the profession.” That extends outside of school, when students are to act responsibly at “social events” and “respect all races, ethnicities, religions, genders, beliefs and values of fellow students.”

They’re never to harm or intend to harm other students by verbal, physical or emotional and psychological means.

“Students should,” the code of conduct says, “treat all members of society justly and with respect.”

The province’s dental board licensing qualifications also say any dental applicants must be “of good moral character” and are not the subject of any complaints or sanctions.

Which is to say, there’s plenty of options to send a message that this type of behaviour is intolerable.

Florizone has stated the university will consider the “full range” of options over the next 48 hours, and that the school will follow a “victim-centred” approach, where the focus is on “understanding and repairing the harm caused.”

Repairing that harm is a big order, which borders on shifting an entire culture’s view of women. That’s admirable, but there’s plenty of practical options the university should also be considering if it doesn’t want abusive medical practitioners in its classrooms.

Immature or not, SMU’s tweeting football players were still suspended for their actions. Dalhousie’s dental students deserve an appropriately greater degree of accountability. Despite the privilege afforded by spending “10s of thousands of dollars,” disciplinary action wouldn’t be ruining the bright future of young students. In fact, it may be a matter of public safety.