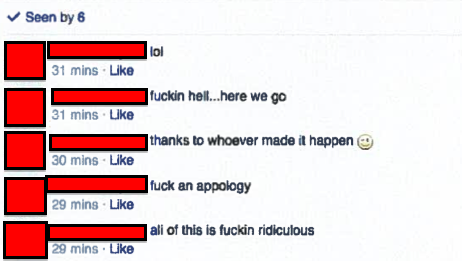 Updated with Dalhousie's response below.

There were at least 15 members of the misogynistic Facebook group that’s rocked Dalhousie’s dentistry school.

Right now, 13 male students in the fourth-year dentistry program are suspended from clinical practice and isolated from their classmates because of the sexually violent posts some put onto the DDS Class of 2015 Gentlemen page. They were the group's members when Dalhousie administrators discovered its existence in early December.

The Coast has learned from two separate sources that one man who was in the group left several months before the men were exposed. Another source has confirmed a separate, fifteenth “gentlemen” who was also at one time part of the group. A student in the dentistry program told us that every man in the class with a Facebook account was part of the group initially.

By all accounts, the dentistry program is intense. Bonds form between classmates. Anyone who did join the group in first year could have done so out of camaraderie. It’s possible many quickly left for moral reasons, after seeing what kind of material was being posted. As we’ve mentioned, the first “joke” about sexually assaulting a female classmate dates back to December 2011.

What we’ve tried to show with our colour-coded screenshots is that not all of the men in the group share an equal blame. The relative “innocence” of bystanders who merely viewed the material can be argued, but combing through the posts it becomes clear that four or five names are responsible for the majority of offensive content. Nevertheless, Dalhousie has suspended all 13 men equally.

During a senate meeting this week, Dalhousie president Richard Florizone stated the administration has met with all the fourth-year dentistry students. A question posed to Florizone asked whether the university could be sure there were only 13 members of the Facebook group. Dalhousie’s legal counsel responded that the restorative justice process currently underway has an investigative element.

The Coast doesn’t know for sure how many men were in the Facebook group at what times. We only know there were more than 13, and the 13 suspended weren’t equal participants. But we don’t have the access and authority Dalhousie does. It’s unclear if Dal's administrators tried to determine any of this information before announcing disciplinary measures.

Aside from an unwanted restorative justice process, the academic standing committee's look into unprofessionalism and Florizone's promised presidential task force, Dalhousie is also moving ahead with an external investigation into “misogyny, sexism and homophobia” in the faculty of dentistry which will be completed and made public by June. Criminal charges may be coming as well, since (see Update below) Halifax Regional Police are now asking for the screenshots to determine if any wrongdoing has occurred. That caused some confusion on Tuesday when Dal’s communications director Brian Leadbetter told Global’s Brett Ruskin that the university wouldn’t be turning over the material to the cops. Leadbetter then corrected himself a couple hours later via an emergency press release.

I’ve had a lengthy list of questions on a wide array of topics (some still to be published) that I’ve been trying to get Dalhousie to respond to over the last couple of weeks. The list has grown with every news update, and every non-answer Florizone and Leadbetter have provided. Multiple voicemails and emails have all gone unreturned, and I’m not the only media outlet they’re using this omertà tactic on. Florizone took a handful of questions at a press conference this past Friday before he was rushed out the door by Leadbetter. Communications advisor Janet Bryson was on hand but wouldn’t answer my questions, either. She only offered to pass them along to Leadbetter. I sent them to him after the press conference, but still no response.

A special senate meeting will apparently be taking place (in camera) Friday morning. We'll have more updates in coming days.

UPDATE: This afternoon I received a response from Brian Leadbetter about questions I had on additional members of the Facebook group. I was curious if Dalhousie had investigated to find other members, or if there will be attempts within the current disciplinary measures to isolate those most responsible for the hateful posts. Leadbetter’s email reads:

“The information available to us has revealed the number of 13. Should more evidence lead to the determination that there are others, then that will be considered. We understand how frustrating this situation is for everyone, given the offensiveness of the Facebook comments in question and the tremendous affinity we all feel for Dalhousie and the faculty of dentistry. This is a very complex matter, and we are taking the time necessary to gather information, follow a just process and to make informed decisions.”

UPDATE: According to a press release, Halifax Police have finished reviewing the screenshots Dalhousie provided them. "Based on the reviewed material as well as the absence of any criminal complaints, HRP will not be commencing a criminal investigation into this matter."