The six Facebook posts that Dal suspended 13 students for 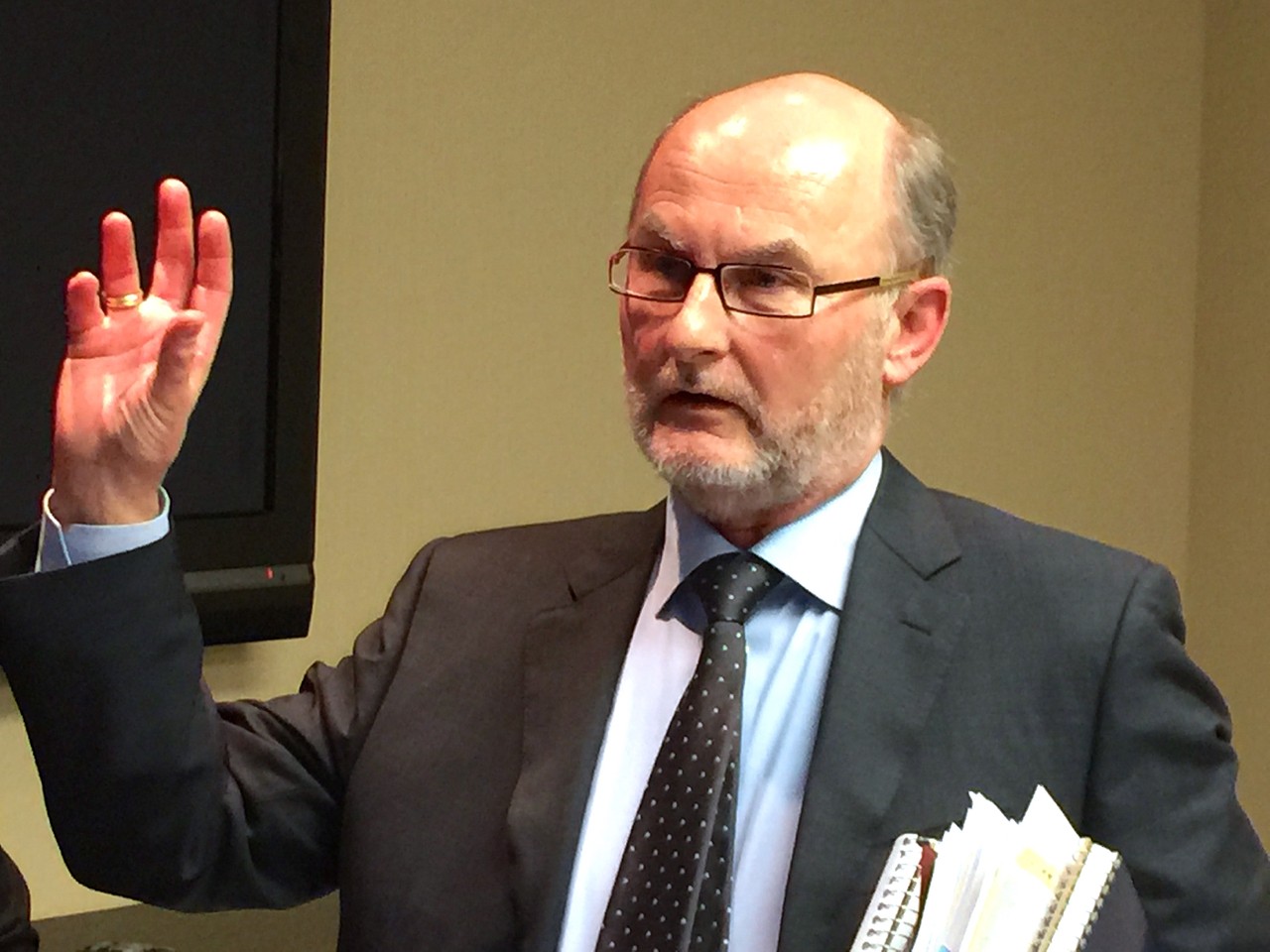 Lawyers for Ryan Millet, the dentistry student who blew the whistle on the “Class of DDS 2015 Gentlemen,” held a press conference Wednesday morning to share the news that Dalhousie is still bungling this whole Facebook situation. Yeah, shocker.

Millet went before a disciplinary hearing Tuesday night in hopes of getting his suspension from clinical work lifted. He and his lawyers were asking the academic standards class committee to conclude—based on a reading of the 40-something screenshots of Facebook posts Dalhousie’s been given—that the 13 "Gentlemen" didn’t participate equally in the group's hateful conversations and therefore don't equally deserve suspension.

However, as father-daughter lawyer team Bruce and Sarah MacIntosh explained at their packed presser, what they discovered at the hearing is that the ASCC suspended Millet due to concerns about just six of the posts. And for all we know from Dal, all 13 of the students were suspended based on a reading of just those six posts. These are not the posts asking which of their female classmates the men would like to sexually assault. Not the posts mocking faculty of dentistry staff, or referring to male classmates who had been in the group but left before the December 12 day of reckoning. And definitely not the posts where Millet tells the other men their misogyny has gone too far and should be apologized for. The six posts in question are below, with names and avatars obscured.

According to Dal’s Facebook fiasco FAQ, the “Academic Standards Class Committee has broad authority over academic performance, including professionalism.” It’s made up of dentistry course directors, it’s guided by the dentistry faculty’s Academic Policy Manual and it “will assess the situation of each student involved” in the Facebook group. None of which explains why the committee’s hearing would only consider six out of of nearly 50 questionable posts.

One of the chosen posts shows a patient lying face-down in an operating room, and likely the ASCC latched onto it because it seems a clear-cut violation of professional ethics by breaching patient confidentiality. In the same vein, two posts that describe drugging women with chloroform and nitrous oxide—tools of the dentist’s trade—are arguably dental misogyny rather than misogyny by and towards students in a faculty that happens to be dentistry. Comments in the fourth post mention Vaseline and supersep (sic), more dental stuff. But there’s nothing similarly dentist-y in posts five and six, which talk of “Hide the Salami” and how the penis is a “tool used to wean and convert lesbians and virgins.”

Maybe the ASCC read the Academic Policy Manual, and in the section about academic dishonesty discovered it had some mandate to act beyond the purview of strictly dental professionalism: “Academic offences will not be tolerated under any circumstances. Penalties for conviction are severe and may include expulsion from the University.” The “Hide the Salami” and penis tool posts are examples of plagiarism, the most common academic offence, as salami’s graphic comes from Some Ecards and the penis line is lifted from Urban Dictionary.

Ridiculous? Absolutely. It’s practically impossible that the ASCC has read the policy manual, as even a cursory skim would reveal the committee has enormous latitude for judging professionalism.

The manual’s Student Code of Professional Conduct has a long list of things students should do to demonstrate their professionalism, such as “Respect all races, ethnicities, religions, genders, beliefs and values of fellow students. Never harm or intend to harm other students by verbal, physical, emotional or physiological means.” They are also supposed to “Refrain from behaviour that would reflect poorly on the University.” Needless to say, this Facebook situation hasn’t exactly cast the school in a good light. The manual warns that "Repeated or blatant unprofessional behaviour may result in a temporary suspension or permanent dismissal from the Faculty."

Taken in its totality, the code has an incredibly wide net for things the ASCC can discipline students over, and allows that such discipline can include suspension, dismissal and, in some cases, expulsion. It goes so far as to state “The Faculty of Dentistry considers that interruptions during class, such as talking and use of cellular telephones, are examples of unprofessional behaviour.” So it's not much of a stretch to think that if talking too much in class can lead to permanent dismissal, talking about attacking your classmates is probably a dismissal-worthy offence. Yet when confronted by about 50 Facebook posts, chock full of examples of unprofessional behaviour, the committee chose to narrow its vision to consider just a few.

The glimpse inside the hearing process that the MacIntoshes have provided is both rare and valuable. Dal refuses to talk about what's going on behind the hearing's closed doors, citing a commitment "to maintaining the confidentiality of that process," as Dal director of communications Brian Leadbetter puts it.

And so Dal leaves unanswered the bigger questions about the ASCC hearings: If the ASCC will disregard evidence that might be favourable to Millet, one of the least active in the Facebook group, will it also do the opposite and cherry pick evidence that makes the worst in the group seem innocent? And without a full assessment of the Facebook posts, can the public fully trust any of the suspended students if and when they are allowed back in the clinic to treat people? Leadbetter simply says "I would reaffirm that we are committed to a just process."

Repeatedly since the existence of the group went public in December, Dal has invoked the need for “a just process.” Dal would like us to think this means that, despite the unruly mob’s cries for the 13 men to be immediately expelled, the school must honour the same sort of rights and procedures that civil society uses to judge anyone accused of wrongdoing. But Tuesday night’s hearing didn’t leave the lawyers MacIntosh feeling that Dal cared a whit for the kind of legal process that's used in the real world.

One issue for the MacIntoshes is the ASCC’s selective focus on only about 10 percent of the Facebook evidence. Another is that before the hearing Dal provided a list of rules Millet is considered to have broken—a list the lawyers had prepared to speak to—yet at the hearing the list of violations was considerable longer.

You don’t have to be a Dal law student to understand that a kangaroo court isn’t due process; theatre students may come across this concept in Gilbert and Sullivan’s Trial By Jury. The MacIntoshes certainly felt the hearing wasn't interested in the whole truth. After four and a half hours, they asked for an adjournment. They’re not sure what exactly comes next.

“We are concerned about the fairness,” Sarah MacIntosh said at the press conference. “It’s irrevocably broken, it’s just not working,” was Bruce’s assessment. He think Dal’s senate (which he sees as the governing body above president Richard Florizone) needs to start the whole process from scratch to have any hope of recovering from the mess the school has made. “It’s a very unhealthy situation.”

Here are the posts Dal’s ASCC considered as grounds to suspend Millet and perhaps the rest of the 13 students, six plucked from a pool of dozens of screenshots that Dalhousie was given. (The Coast obtained Dal’s collection, and published many of them in December, as you can see here. If you want to be like the ASCC, you won’t look at them.)

The photo of the person in an operating room may be a clear violation of patient confidentiality, as the poster implies he snapped the photo while accompanying a Dal doctor. Its value as evidence against Millet is questionable, however: He testified at the Tuesday hearing that he’d never seen the photo before. 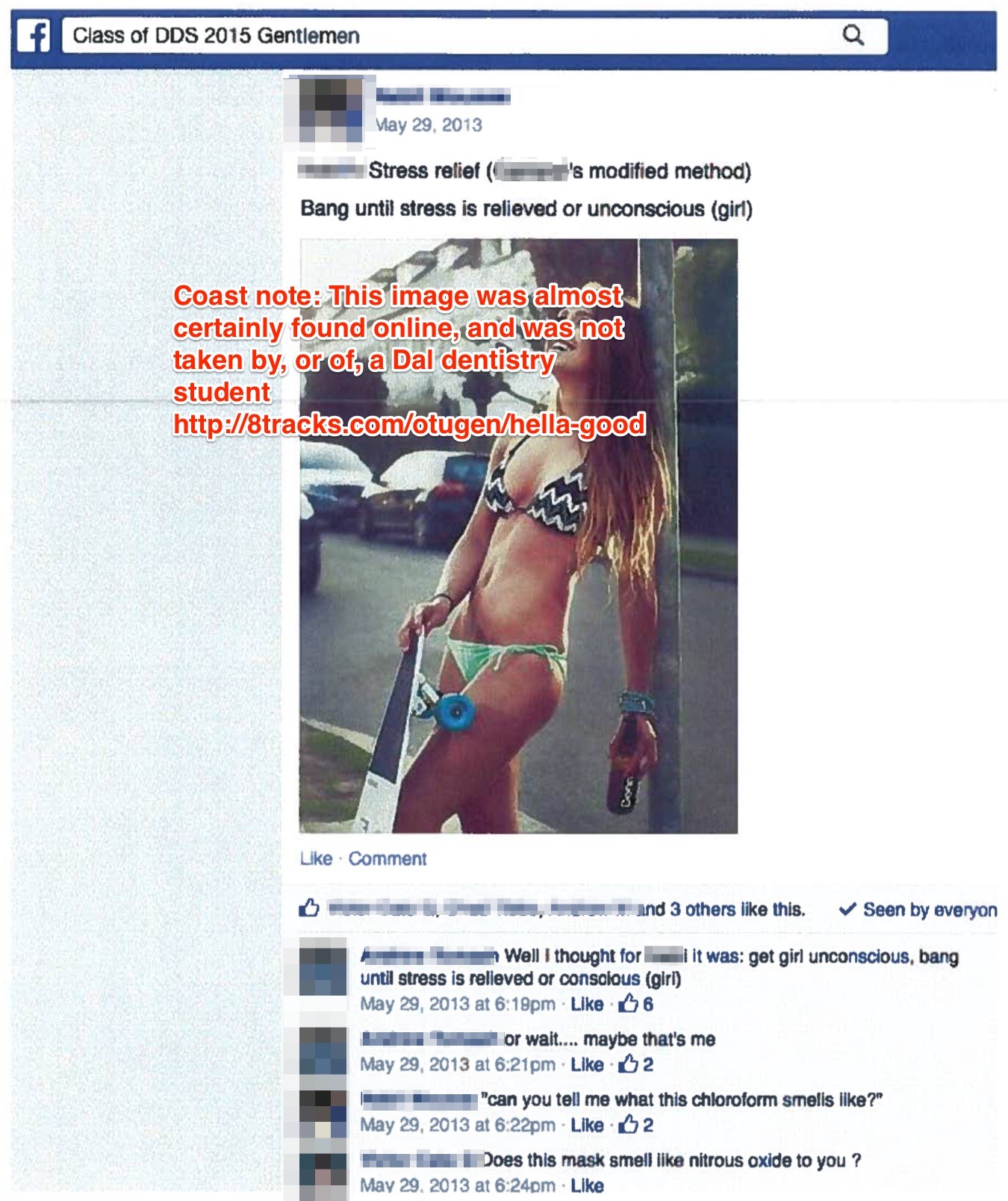 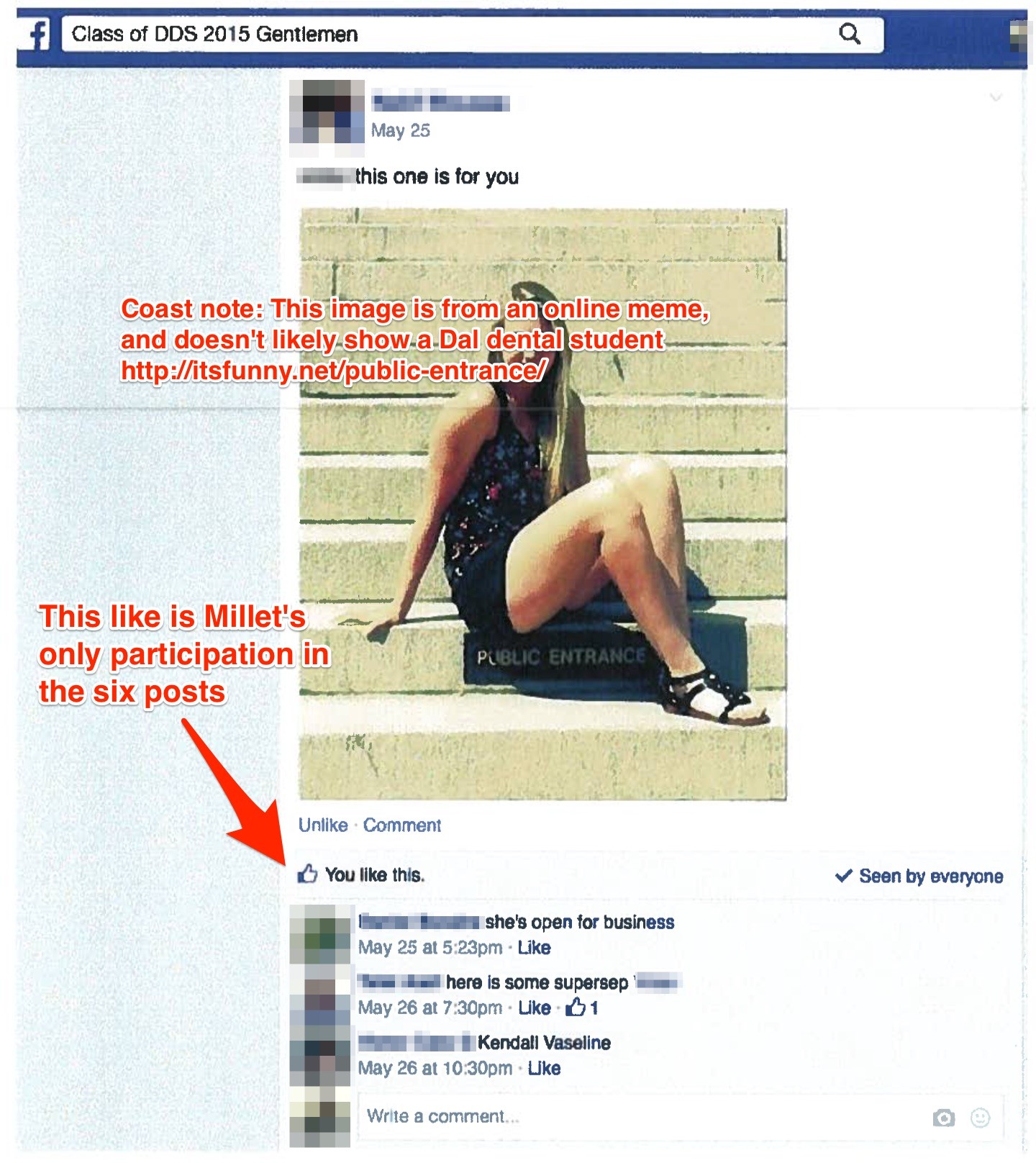 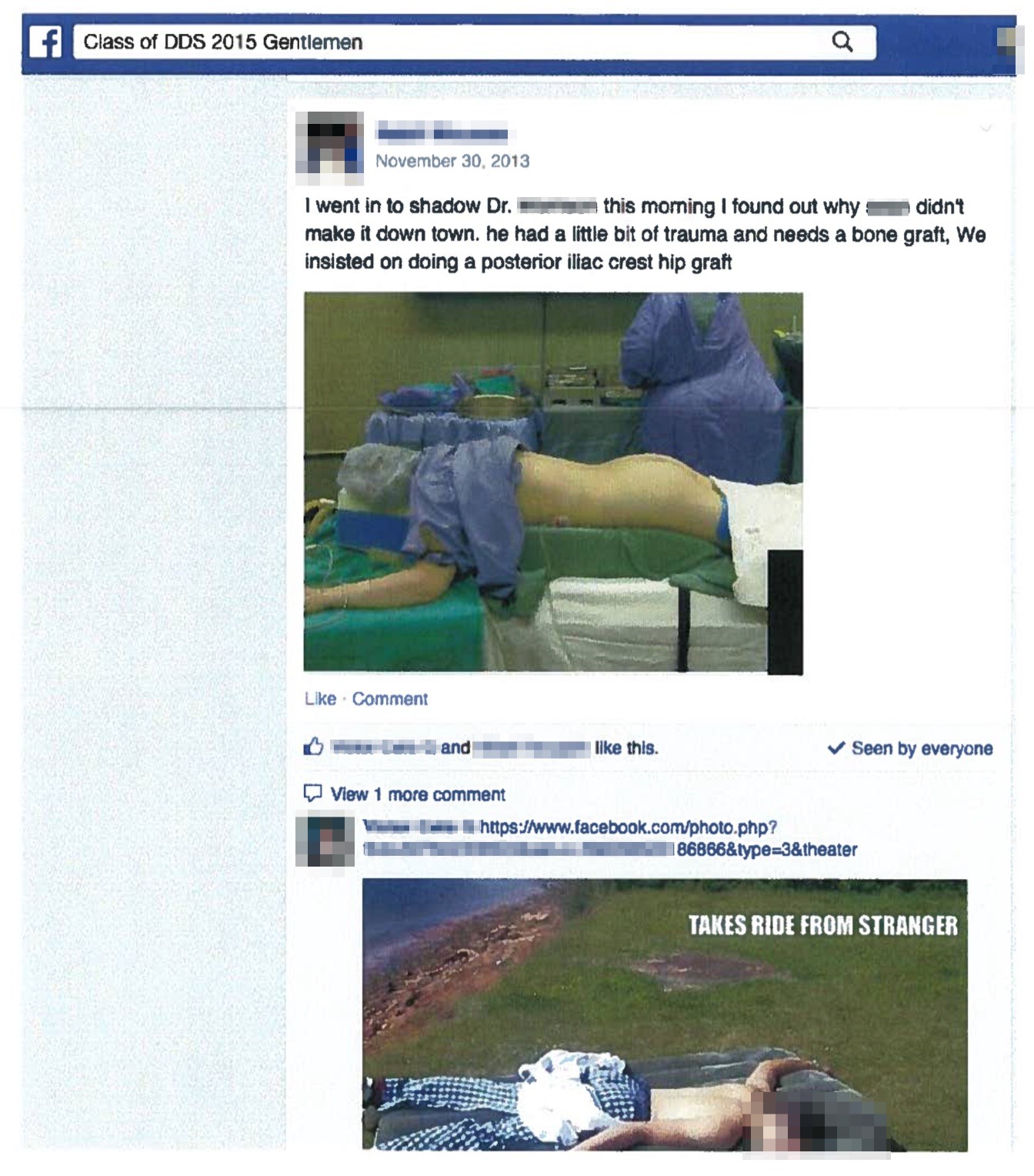 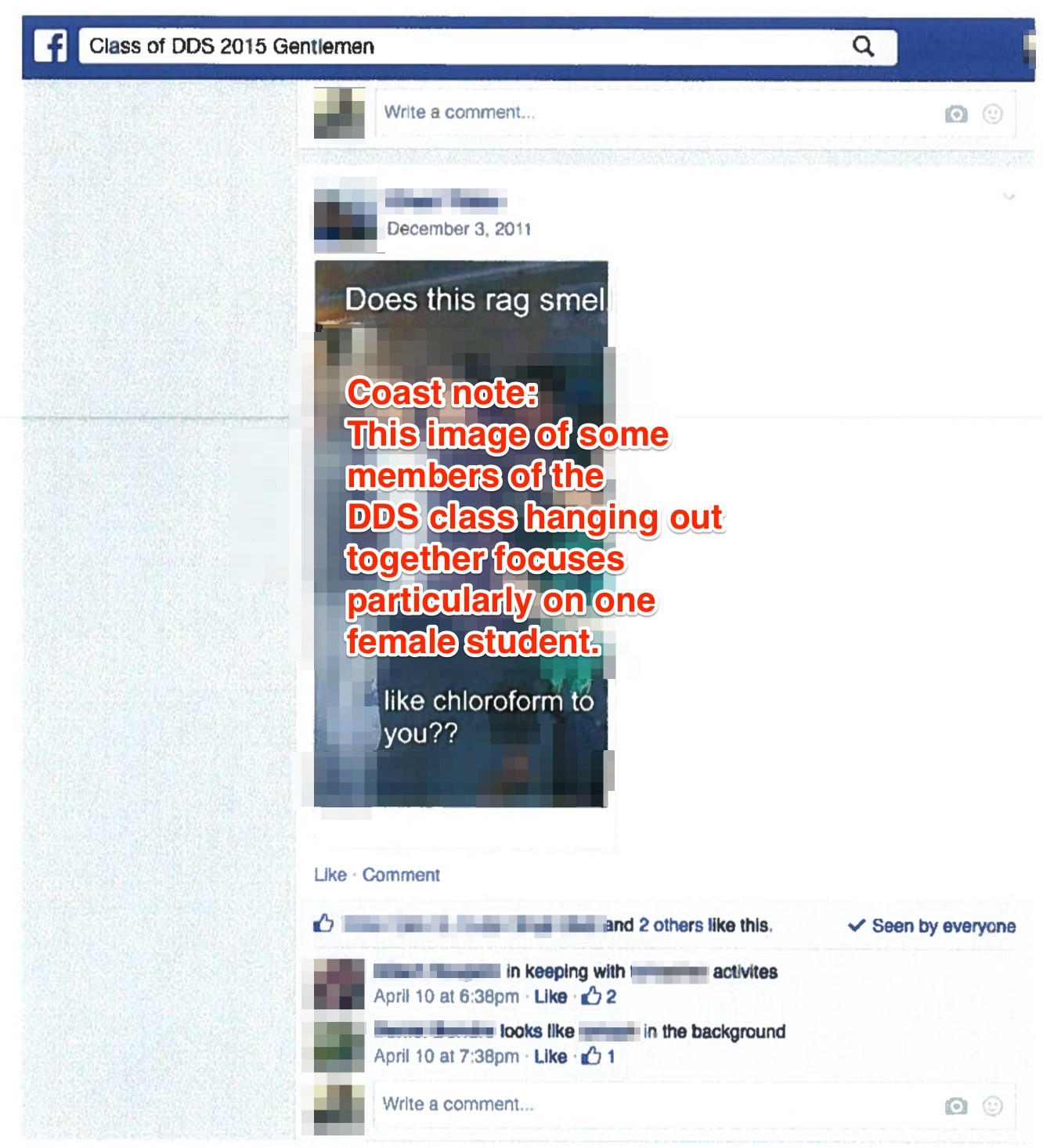 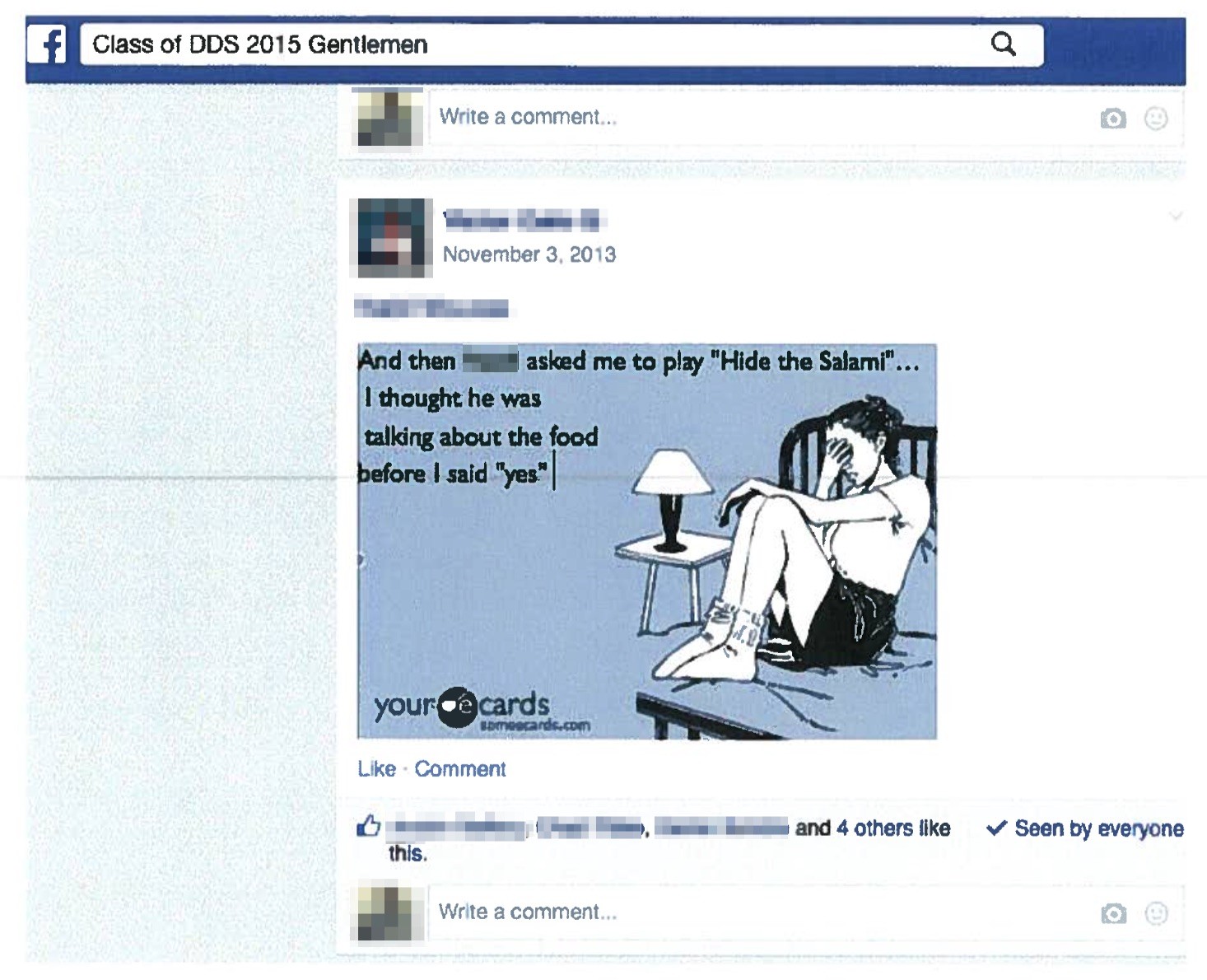