UPDATED: You helped the "asshole with a shovel" get a new wheelchair

The hero we deserved this winter. 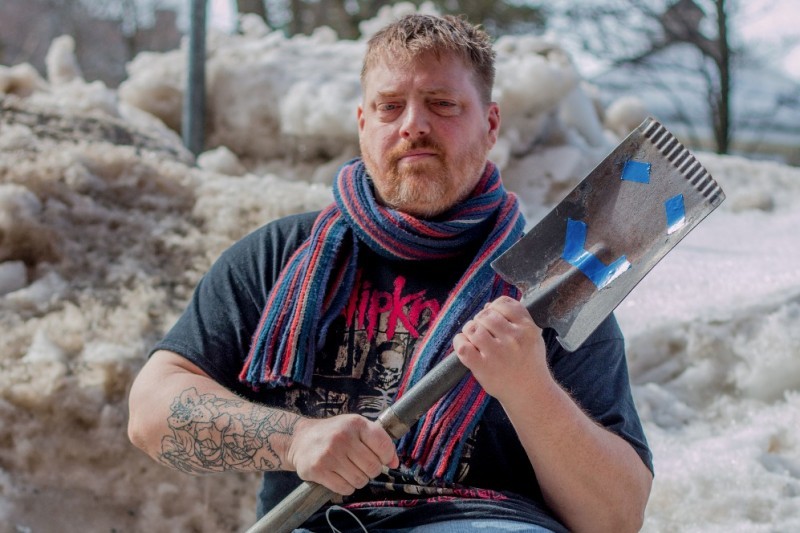 UPDATE: The GoFundMe page has now more than surpassed it's $8,000 goal. Congratulations to Paul Vienneau and the generous people of Halifax!

There’s probably been no better symbol of the struggles with snow clearing this winter than Paul Vienneau.

The photographer and musician has used a wheelchair since a bicycle accident in 1991, but had few problems living independently until these past icy weeks. Stuck inside his house for days, Vienneau grabbed a shovel and metal rod to take out some frustrations on the city’s uncleared sidewalks. Since February 12 he’s spent more than 35 hours of his time volunteering to clean up Halifax’s icy roads, crosswalks, storm drains and sidewalks. In the process, he’s become one of the loudest voices for just how dismal this winter has been.

“It’s not a citizen’s job to clean the streets, obviously,” Vienneau says. “But when things are extraordinary, people need to go out and do extraordinary things.”

Earlier this week, the Halifolks Facebook group wrote some in-depth profiles on Vienneau’s efforts and took notice that his current wheelchair has seen better days. Now, a GoFundMe page has been set up to help Vienneau purchase the “wheelchair he deserves.”

“I’m beyond humbled by this,” Vienneau says of the fund’s quick success. “I spent five weeks not working, feeling isolated and alone,” but now cars slow down to say thanks, bus drivers wave and the public is giving a little bit back.

“It’s totally reconnected me to everything.”

One of the first places Vienneau might head off to in his new chair will be City Hall, for a meeting with mayor Mike Savage. The “asshole with a shovel” has a rather practical proposal for improving sidewalks come next winter.

It’s nothing too radical. Vienneau says while workers currently clear sidewalks and streets, no one is looking after crosswalks and curb cuts. He’d like to see a “militia” of college students and concerned citizens blitzing those areas during each snowstorm. That way, two days later they’re not a frozen patch of ice (and a month later they’re not a pond).

“I don’t want to pile on,” he says of this season’s less-than-spectacular snow clearing. “This was never about fuck the mayor or the workers [are] lazy. I spent my adult life complaining about shit. I decided to do this in a non-Oprah, inspiring way. Just go out and take control over a small part of my block.”

How Halifax responds to this painful winter remains to be seen. But struggling for weeks, unable to work due to snow, Paul Vienneau has created his own opportunity to shovel Halifax out of the ice age.

Even if you can’t pitch in for his new wheelchair, that’s probably worth a pat on the back.