Absolutely nobody wants to be Halifax’s town crier

Council votes to leave ceremonial position unfilled due to lack of applicants. 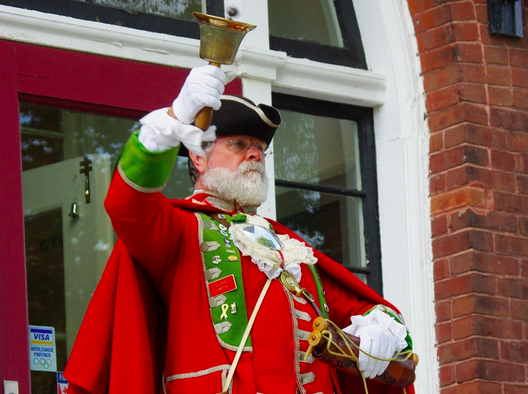 Some HRM councillors didn’t know whether to laugh or cry yesterday at a staff recommendation to stop working on the recruitment of a permanent Halifax town crier. The position has remained largely unfilled since former crier Peter Cox passed away in 2009.

“I personally believe that Peter Cox would be rolling in his grave if he heard his beloved city would be doing this to his legacy,” Hendsbee said. “I’m not going to support this recommendation at all.”

There used to be several criers serving the HRM before amalgamation, including Cox who served as the crier for the City of Halifax. They would greet cruise ship passengers, make announcements at government events and even attend marriage ceremonies—adding some ceremonial pomp to community gatherings. Currently, there are three community town criers in Sackville, Spryfield and Eastern Passage who also attend municipal functions elsewhere in the city when required.

Over the last seven-and-a-half months, Halifax has used the services of a town crier on exactly two occasions: August 3 for Natal Day festivities, and September 9 in Grand Parade to celebrate the reign of Queen Elizabeth II. A town crier was also used last December to mark the annual departure of Halifax’s Christmas tree to Boston, but that event is organized by the province.

Back in 2013, council passed a motion to appoint an interim town crier until a permanent candidate could be selected via a competition process. Interim town crier David Nimmo only lasted two weeks on the job before resigning for personal reasons. So another call for applicants went out this past spring, advertised online and promoted in the media.

“No applications were received,” Elizabeth Taylor, manager of culture and events, writes in yesterday’s staff report.

Currently, town criers in the province register with the Nova Scotia Guild of Town Criers, who provide oversight of the competition process for hiring new criers. Halifax staff have estimated a total of $20,000 would be needed to appoint a new town crier, including $3,000 on advertising, $5,000 on a “HALIFAX branded Town Crier costume” and a monthly stipend of $300.

“Given that staff has encountered considerable challenge in addressing Council’s direction to appoint a permanent Town Crier for HRM,” writes Taylor, “and given that staff has had success working with NSGTC over the past two years, it is recommended that Council direct staff to cease work on the recruitment of a permanent HRM Town Crier and continue to work with the Nova Scotia Guild of Town Criers to meet ongoing commitments for the use of town criers.”

That proclamation didn’t sit well with some councillors.

“I think it’s too premature, quite frankly,” said Dartmouth South-Eastern Passage councillor Bill Karsten yesterday. “There’s elements in the report totally contradictory than what I was told when I was across the table with [NSGTC member Lloyd] Smith.”

Despite the cries of Karsten and Hendsbee, the motion passed 11 votes to five.