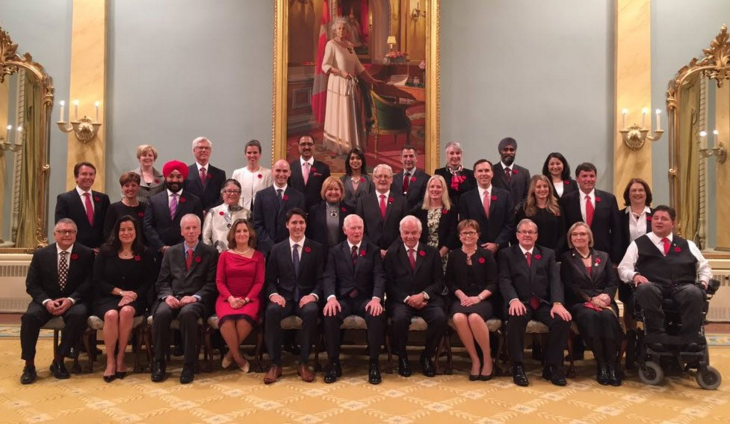 1
Justin Trudeau promised gender parity in his cabinet, and today he delivered. Asked why appointing an equal number of women was important, Trudeau replied “Because it’s 2015.” For what it’s worth, writes Tasha Kheiriddin at the National Post, that’s only three more female cabinet ministers than Stephen Harper had in his last cabinet. “That’s despite the fact that he had fewer women than Trudeau to choose from.” Of course, Trudeau brought on 15 female MPs today out of a total of 30. Harper’s 39 portfolios meant women only accounted for 30 percent of his last cabinet.

2
Ralph Goodale, the new minister of Public Safety and Emergency Preparedness, was first elected to parliament in 1974 at the age of 24. The Regina-Wascana, Saskatchewan representative is the only current Member of Parliament to serve under both Justin Trudeau and his father, Pierre Elliott.

3
The new minister of finance knows his way around Bay Street, and french fries. What Bill Morneau lacks in government experience he makes up for in business acumen as former chair of the C.D. Howe Institute economic think tank, and as executive chair of human resource firm Morneau Shepell (a position he gave up upon winning in October). He’s also married to Nancy McCain, of New Brunswick’s McCain Foods Limited.

4
New justice minister Jody Wilson-Raybould is a good sign that Trudeau will follow through on his promise to open an inquiry into missing and murdered aboriginal women. Wilson-Raybould is a member of the We Wai Kai First Nation. She also served as regional chief of the Assembly of First Nations from 2009 to 2015. She credits Stephen Harper’s response to Idle No More as a motivating factor in running with Justin Trudeau’s Liberals. Wilson-Raybould’s Twitter handle—Puglaas—is a native name given to her by her grandmother, meaning “a woman born to noble people.”

5
The new Leader of the Government in the House of Commons, Dominic LeBlanc is an old childhood friend of Trudeau. In fact, according to Global, he used to babysit the current Prime Minister.

6
A lot has changed in ministerial and portfolio titles, and much of it points to what Trudeau’s governmental priorities will be. While Harper had a minister of state for seniors, Trudeau himself will be the new minister of Intergovernmental Affairs and Youth. Other changes? The ministry of Citizenship and Immigration is now Immigration, Refugees and Citizenship. “Climate Change” has been added onto the ministry of the Environment. The ministry of Indigenous and Northern Affairs replaces Aboriginal Affairs and Northern Development, Industry is now Innovation, Science and Economic Development and several ministries (Status of Women, Small Business and Tourism, Sport) are now full portfolios rather than the junior status they held under Harper’s reign.

7
Indigenous and Northern Affairs minister Carolyn Bennett is a former family physician and has fought to eliminate dangerous chemicals in Canadian sex toys. In a 2009 letter to the then-minister of Health, Bennett called for the “urgent need for responsible regulation in the adult toy industry in Canada.”

8
The minister of Public Services and Procurement is a cancer survivor twice over. Judy Foote battled breast cancer 14 years ago, and underwent a double mastectomy this year when the disease returned.

9
Harjit Sajjan, the new minister of National Defence, was the first Sikh commander of a Canadian army regiment. He’s a veteran of peacekeeping efforts in Bosnia-Herzegovina, and has seen three deployments to Afghanistan.

10
Canada’s newest minister of Infrastructure and Communities was arrested for terrorism. Amarjeet Sohi was arrested and imprisoned for two years in India as a political prisoner and activist advocating for land reform. He was held almost two years without charges, often in solitary confinement and frequently tortured. Upon moving to Canada, he worked as a bus driver before being elected to Edmonton’s city council.

11
Etobicoke North’s Kirsty Duncan is not only the new minister of Science, but one of the members of the Intergovernmental Panel on Climate Change—a group that split the 2007 Nobel Peace Prize with Al Gore. Though, it would be inaccurate to say Duncan herself is a Nobel recipient, as many on the Internet are keen to point out.

12
The Liberal cabinet took a bus to an opened-up Rideau Hall today, “rather than individual limousines as Tory ministers used.” Trudeau then answered questions from the media, swore-in his new cabinet and participated “in a Google Hangout with school children from five schools across Canada.” WE GET IT, JUSTIN.