Apartment complex planned as the north end struggles with gentrification. 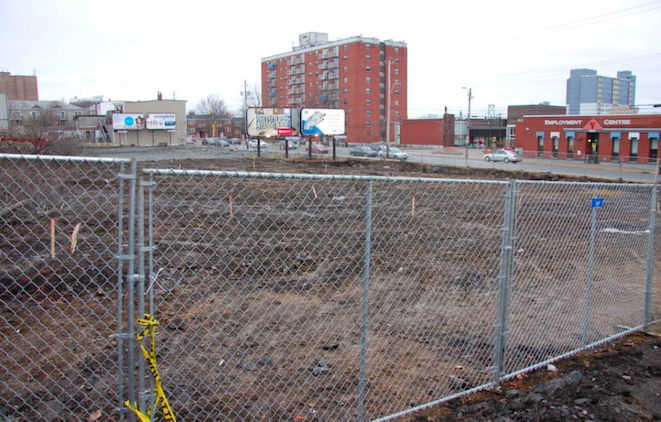 It’s sat empty for years, but there are finally some signs of life from this Gottingen Street lot. The barren location, across the street from the Halifax North Memorial Public Library, is to be the home of a new apartment building planned by Ross Cantwell and other partners of 2300 Gottingen Street Ltd.

Cantwell says a building permit for the residential project will be submitted in the new year, but in the meantime a chainlink fence has been erected and work has already begun on breaking rocks and stripping the soil (which was contaminated with naturally-occurring lead and arsenic).

The company purchased the land back in October. Previous owners, the Creighton Gerrish Development Association, had been attempting to build a low-income, 48-unit condo complex on the empty lot until those plans fell apart this past summer.

Board member Jim Graham told CBC at the time that financing for the project “was impossible to secure” and provincial and private partners fell through.

Since then, the lot has been home to a small parking lot and a food truck. That, and a quick shortcut for anyone walking from Cunard to the Gottingen Street bus stop. New rental units will, at the very least, make better use of the land then what’s there currently. Just don’t call it gentrification.

“We’re looking at this and saying, ‘Hey, this is a vacant parking lot,’” says Cantwell. “We’re not kicking anybody out from an apartment and doubling rent.”

That’s what’s happening to some north-end neighbours living in non-profit housing. Harbour City Homes has recently come under fire for selling off several of its north-end low-income properties, leaving tenants to faces drastically increased rents in what amounts to pretty much the dictionary definition of gentrification. The not-for-profit has said it has to sell the properties to maintain its other properties.

Cantwell is also continuing work with the Housing Trust of Nova Scotia to develop affordable housing on two empty Gottingen Street parcels further south—the former Diamonds bar at the bottom of Cunard and the old MET store that was next to Alteregos. Despite some rezoning appeal setbacks, Cantwell is confident those 250 units will come online soon to offer better housing options for the city’s working poor.

“The single mom working 40 hours a week with children in daycare,” he says, describing expected tenants. “If people with full-time jobs can’t afford to live in our community, we’ve got problems.”

Good intentions aside, new buildings and neighbours can increase the value of surrounding properties and inadvertently wind up pushing out longtime residents. But that’s just the “natural evolution” of neighbourhoods, says Cantwell. He’s hoping the affordable units will correct that imbalance, but admits there are bigger housing problems than can be fixed by one redeveloped lot.

“One of the challenges in Halifax is that federally the Harper government checked out of affordable housing years ago,” Cantwell says. “This stuff costs money.”