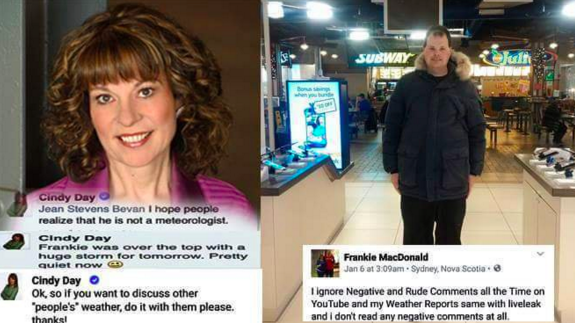 UPDATE: Day and MacDonald have apparently quashed their beef (see below), so everybody can stop with the wrathful anger now. Happy Valentine's Day!

Last evening, I had a wonderful conversation with Frankie MacDonald . I was so happy I was able to reach him. I wanted...


Fans of Frankie MacDonald are calling for Cindy Day’s job after the CTV meteorologist made online comments which appeared to insult Cape Breton’s beloved weather forecaster.

Yesterday, CTV Atlantic’s Cindy Day replied to comments on her Facebook page about Frankie MacDonald’s accuracy in weather predicting by reminding everyone that MacDonald isn’t a trained meteorologist. The comments have since been deleted. 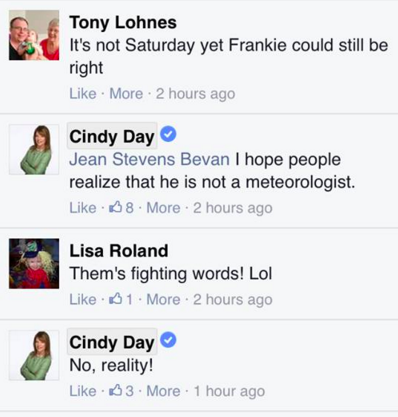 While Frankie MacDonald has been recognized by everyone from Buzzfeed to the House of Commons for his weather videos, unlike Day he does not have a degree in meteorology.

But pointing that out, while perhaps originally conceived as a playful ribbing on Day’s part, was nevertheless read by many as a condescending slight against an autistic man doing what he loves most.

The original post now has 154 comments and close to 300 shares. Day’s subsequent apology now has over 1,000 shares and 1,600 comments. In both, people pick apart her language, tell her she’s jealous, accuse CTV of condoning cyberbullying and call for Day to be fired.

Because she's a woman having any sort of opinion online, several commenters also show their support for MacDonald by repeatedly calling Day "bitch" and "cunt."

I've been following the fallout from innocent comments that I made earlier today on Facebook. It breaks my heart to...

Naturally, there’s now a change.org petition to get Day fired.

The one person who doesn’t seem to be paying much attention to it is MacDonald himself. He posted to Facebook yesterday letting his fans know he ignores “negative and rude comments."

Hi Guys i am doing so well on my videos so far and i always ignore negative and rude comments all the time especially trolls and Bad Guys.

That hasn’t stopped the masses from continuing to attack Day online.

“Frankie may not be a meteorologist but he is the nicest guy with a great sense of humor,” writes Curtis Patrick Boutillier on Day’s page. “He has his face tattooed on people’s bodies. Who’s body is your face on Cindy?”