Sidewalks closed on Spring Garden Road for next two weeks. 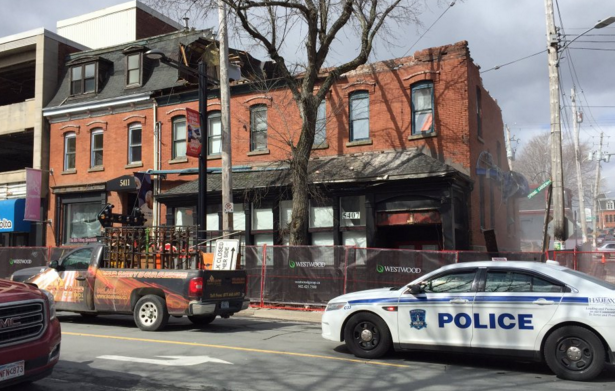 Sidewalks on the north side of Spring Garden Road and south side of Doyle Street between Brunswick and Queen are closed for the next two weeks as demolition of the Doyle block is now underway.

The entire city block is coming down to make way for a seven-storey mixed-used complex including a boutique hotel, residential units, landscaped courtyards and (according to some) a ruined view from the Central Library across the street.

SignalHFX, the news website for King’s College’s journalism program, shared some video of the demolition:

Formerly the home of the Bank of Montreal, Rogues’ Roost, the Fireside and Tom’s Little Havana (among other), the site is being redeveloped by Danny Chedrawe’s Westwood Developments. But some residents aren’t thrilled watching the eclectic mix of buildings be razed to the ground.

I don't really have much to say about this except that it's a total failure of planning and development. pic.twitter.com/oKKG8Kjny6

Matthew Halliday has previously written an opinion piece in a local daily newspaper (that we’d prefer not to link to right now) criticizing the “blockbusting” style of the Doyle Street project.

“The irreplaceable, eclectic architectural mix on the current Doyle block spans nearly 100 years, from Victorian fussiness to art-deco grandeur to mid-century modernity. It’s a great place to see Halifax’s characteristic blend of old and new—the ornamental façade of the Maritime Life Building is juxtaposed dramatically with the sharp angles of the Halifax Central Library across the street. And the versatility of these constantly renovated, re-adapted buildings has allowed all sorts of businesses to flourish: cafés, bars, a brewery, a hookah lounge, high-tech startups and more.

It’s a genuinely great city block. The restoration potential is obvious. In 2015, it’s almost impossible to imagine a developer based in Montreal or Toronto assembling a similar collection of buildings, on a comparable commercial street like Rue St. Denis or Queen Street West, and simply pulverizing the whole thing.”

A public advisory from HRM says the sidewalks will only be closed for the next two weeks, but further closures "are expected as development continues.”

New construction mitigation guidelines to ease downtown construction pains like annexed sidewalks are being developed by the city and a report is expected back in May.

Also, a reminder that tonight, Monday, is the launch event for HRM’s Centre Plan. The kickoff for the public input process that will guide future downtown development takes place tonight, 6pm at Alderney Landing, but anyone invested in urban design can have their say here.