Be glad you’re not house shopping in Toronto 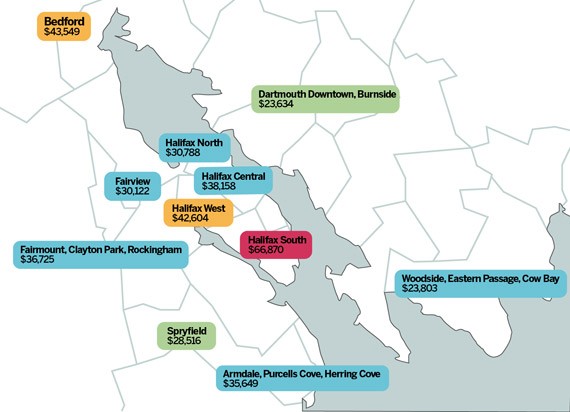 In today's age of inflated housing prices and looming bubbles, shadow selling, house flipping and trading, the real estate supply in Canada is beginning to look and act a whole lot more like precious metals than necessary dwellings for you and your family.

“Parts of the HRM are certainly still affordable with an average sold price below $250,000,” says Shannon Gavin, a PropertyGuys.com franchise owner in HRM. “...A couple, both earning full-time minimum wage, with some savings, can afford home ownership. Take the Woodlawn area of Dartmouth for instance.”

According to real estate numbers The Coast crunched from viewpoint.ca and the Canadian Real Estate Association's average price map, Halifax is looking pretty happy relative to other provincial capitals when it comes to housing costs compared to average income.

Price-to-income ratio—a simplified measure of housing affordability—says that your home should be around three times more than your yearly income. According to Statistics Canada, the average weekly earnings for a Nova Scotian working full-time, across all major industries, was $903 in June. That’s an average salary $43,334.

Although there is no municipal district in or near the Halifax core where average home prices are as low as $130,001 (three times the average Nova Scotian's yearly earnings), HRM is still one of the most affordable capitals in Canada.

The average weekly income across all major industries in British Columbia is just $1,072, which is just $51,474 per year (or $8,140 more annually on average than Nova Scotians make).

Despite the good margins, Gavin doesn’t feel HRM is totally in a buyer’s market just yet.

“Sure, in some areas we are, but certain neighbourhoods have definitely leaned in to a more stable market, where there is less inventory but buyers are waiting for that special home,” she says.

It’s a similar story from RBC’s Canadian Housing Affordability index, which compares median pre-tax household incomes required for mortgage payments, property taxes and utilities for the average single-family detached home/condo across the county. The latest report from June found Vancouver and Toronto continuing their skyrocketing trend away from affordability, while Halifax dropped to its most affordable housing levels since the mid-‘80s. The level of activity in our region remains worryingly soft, though, coming in at 12 percent below the 10-year average according to RBC.

What does the future of HRM’s real estate look like? Gavin isn’t making any dramatic predictions one way or another.

“I think we will see a fairly stable market that continues to have its natural ebbs and flows.”