Savage and MacPherson face off at public forum 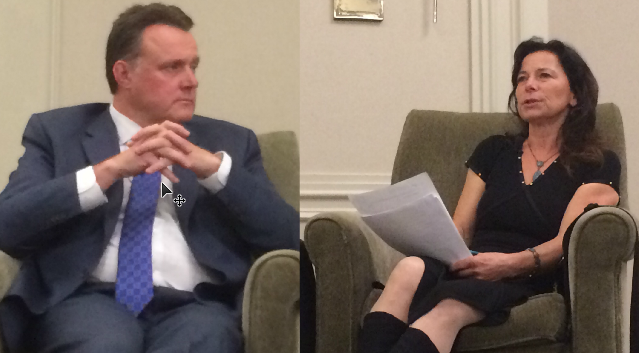 Mayoral incumbent Mike Savage and election challenger Lil MacPherson, co-owner of the Wooden Monkey restaurant, squared off on Tuesday night during a debate hosted by HRM’s eight business improvement districts. The event, held at the Westin Hotel, covered a range of issues from environmental concerns to city development. Here are some of the highlights.

Environmental concerns
MacPherson, a climate change activist and sustainability advocate, said it was HRM’s environmental struggles that made her decide to run for mayor. Not enough is being done to protect our environment, warned MacPherson, who last fall attended the Paris Climate Talks. The challenger said more lake testing in HRM needs to be undertaken, before calling herself a “water Nazi at work” and challenging Savage to ban plastic water bottles in HRM. Savage countered that council had already banned plastic bottles at meetings.

MacPherson also criticized council for not enforcing a green economy. She advocated for a combination bus and bike lane which she dubbed “the lane of change.” Savage, meanwhile, citied council’s recent protections of the Purcells Cove backlands and steps toward possibly protecting the Blue Mountain-Birch Cove wilderness park as examples of HRM’s green priorities.

MacPherson says we should do more urban agriculture. Cities food insecurity as an issue. Then says Syrian refugees are really good farmers

Development and protecting small businesses
In the defence of development concerns, Savage proclaimed several times that Halifax is the second fastest-growing city economy in the country, which was not the case in 2012 when he came into office. MacPherson said people are concerned about the density of construction, and that it needs to be more of a community-led and sustainable process. MacPherson also shared her concerns as a small business owner that HRM is “putting a cap on small businesses” through taxation and red tape. Savage admitted that council could “do better on some of these issues,” referencing Dartmouth's Darkside Cafe and its recent bylaw dispute.

Support for the arts
The debate ended on a lighter note, with both candidates professing their appreciation for Halifax's arts and culture community. "I want to be more of a city that embraces art and embraces music," said MacPherson, suggesting those in attendance should visit Europe. Savage praised recent celebrations like the Atlantic Film Festival and Prismatic Arts Festival as helping residents to understand that sentiment in their own backyards.

Savage references El Jones' and Rebecca Thomas' performances at Prismatic. Says they are great artists who also challenge us.