All the candidates and issues facing District 11 this election. 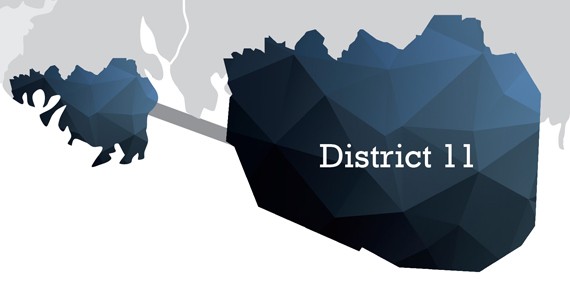 This enormous district is home to sprawling communities of various rural, suburban and urban populations. The abundance of individual neighbourhoods each have their own infrastructure (playgrounds, fire halls, and recreation centres are high in demand) ecological issues.

The Candidates
Stephen Adams is the longest serving representative on Regional Council, having first been elected in 1991. He was born and raised in Spryfield, but relocated to Bedford in recent years to live with his wife. That didn’t affect his popularity with voters, it seems. Against three challengers in 2012, Adams walked away with nearly 50 percent of the vote. Up against the longtime councillor is newcomer Dawn Penney, who calls herself the district's environmental candidate. Penney is a personal care worker, but says she’s always had an interest in politics. She previously ran for the last school board election in 2011.

The Issues
The biggest news story in District 11 in recent weeks was HRM’s decision to purchase portions of the Purcells Cove Backlands from the Shaw Group to keep as a wilderness preserve. Though the deal isn’t done yet and a price needs to be negotiated, Adams will certainly count that as a win while campaigning. Meanwhile, residents in nearby Harrietsfield are still without safe drinking water. The well water for that community has been contaminated and undrinkable for over 15 years, due, in part, to leakage from the old RDM Recycling plant. Although several moves have been made by council and Nova Scotia’s Supreme Court to correct the issue, the problem persists—lost in a mix of court battles. As Adams will be trumpeting the Purcells Cove deal and Penney considers herself an environmental candidate, we think both should commit themselves now to working with other levels of government to finally turn the taps back on in Harrietsfield.