Will the Chronicle Herald ever be the same?

Veteran journalists and student interns are wary about the paper's future after a year on the picket line. 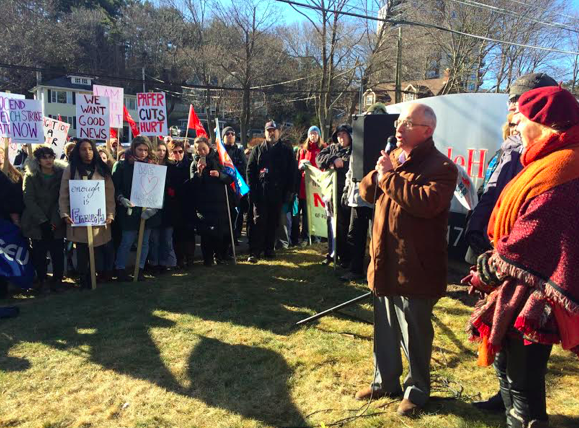 After a full year on the picket line, members of the Halifax Typographical Union are concerned the Chronicle Herald newsroom as they know it will not be able to recover—even if an agreement is met.

Union supporters rallied across the province Monday to show support for the 55 remaining members of the Herald’s unionized newsroom staff.

The union and Chronicle Herald management are meeting again this week, after months without any formal talks, in the hopes of coming to an agreement.

Roger Taylor, business columnist for the newspaper, celebrated his 35th year at the Herald by putting in a four-hour shift on the picket lines last November.

Vice president of the HTU Frank Campbell says the union is negotiating on behalf of the 26 employees who’ve been threatened with layoffs, calling the number “a moving target.” Even if all 55 HTU members—down from 62 when the strike started—head back to work with a new contract, Campbell says the reduced number of experienced journalists means the newspaper “obviously can’t be the same as it was.”

There also won’t be any student journalists working at the paper this spring, either. Tim Currie, director of the school of journalism at the University of King’s College, says by email that the department is not authorizing any of its 65 graduating students to intern for the Herald this year because of the “unstable work environment.”

“I would say to any young journalist to avoid being a scab because I think that label follows you wherever you go and whatever you do from that point on,” says Campbell.