“Do you deny institutional racism exists!?” shouts a man, rising to his feet, to cheers and rumblings in a crowd of more than 70 people. There’s a pause. Then Halifax Regional Police chief Jean-Michel Blais responds:

“What do you mean by institutional racism?”

This is just one of many charged exchanges that broke out during a panel discussion Thursday night at the Halifax North Memorial Public Library on racial profiling and street checks.

The event comes in light of data released by the police department which showed that Black people are at least three times more likely to be engaged in street checks than white people. Street checks are interactions with individuals, defined as observations and attempts to collect information by police. They’re not motor vehicle stops or arrests.

Standing alongside chief Blais was Brinton. She works as managing lawyer for NS Legal Aid. Many of her clients have been stopped by police.

“You have a right to know why they are talking to you,” she said, speaking in a clear, firm tone directly to the crowd. “You can walk away.”

Her young clients often ask her the same question: “Why can’t they just live?”

Brinton said these street checks often lead to charges of obstruction and/or resisting police, but with little else, criminally, to back it up. 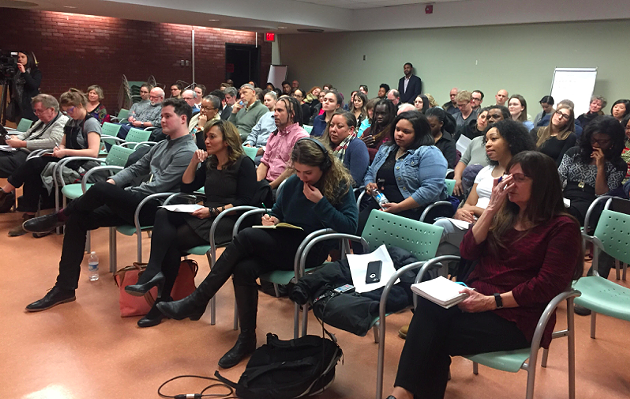 Lana MacLean, a social worker, in race, trauma, culture and crime, told the room the over-representation of Black people among police street checks points to a systemic, endemic problem. MacLean says her own nephew was stopped by police, biking down North Street, on his way home from Oxford School.

“Early exposures (to police)…sets up a dynamic of mistrust.”

MacLean says there’s a pattern, and it’s a story she’s well familiar with: Police stops in childhood lead to stops at age when Black youth can get a driver’s license. What was once a scared kid being pulled over while biking home from school, she said, is now a young (often male) Black person who already has reason to be suspicious.

MacLean wasn’t just speaking on behalf of her clients and community. She’s been stopped by police, herself. She says when you see red and blue lights in your rearview, it’s like having a panic attack.

“As someone who has been pulled over…because of someone being curious about where I was going…those spiritual wounds, psychological wounds engender mistrust.”

Marcus James listened carefully from the back of the room, by the door. He’s worked at the north end branch for more than 20 years. He was also involved in community consultations during the Kirk Johnson and helped develop recommendations for the police back in 2003.

“Why haven’t they been implemented?” James asked chief Blais once questions from the public were opened up. “On three occasions I’ve been arrested coming out, locking up after events such as this. I’ll do the same tonight, and there’s a good chance I’ll be arrested. For locking up the north branch library.

“Kids who I mentor in the library have witnessed me being detained, by officers who I have provided diversity training for,” said James. “What can we do to repair that? If the solution doesn’t look like me, it’s not gonna work.”

At the moment, Halifax Regional Police have made no commitments in policy or programming to address the data or the resultant unrest, though Blais stressed the department is committed to a continuing “conversation.” The chief recommended anyone with concerns about street checks could file a formal complaint with HRP.


Correction: An earlier version of this story reported that Brinton worked for Dalhousie Legal Aid, not Nova Scotia Legal Aid. The text has been updated and The Coast for the error.