Poet laureate inspires a fresh look at how Halifax honours its violent founder. 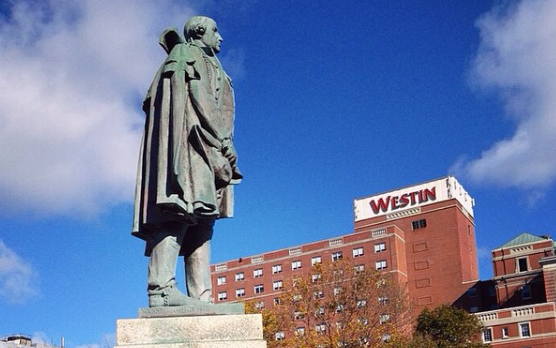 Rebecca Thomas’ words have not fallen on deaf ears.

The city’s poet laureate delivered a powerful message this week, and it’s inspired city council to reopen a heated debate about how Halifax commemorates its controversial founder.

Thomas appeared at City Hall to perform her poem, “Not Perfect,” at the start of Tuesday’s council meeting.

The piece talks directly about Edward Cornwallis, the British military officer who founded and in the same year issued a bounty on Mi’kmaq scalps.

“...We were seen as animals, only valued for our pelts,” said Thomas, about the proclamation.

The poem was written last year in response to a narrowly-defeated motion at . Waye Mason proposed back in May that HRM should begin a public engagement process on whether the city should keep honouring Cornwallis on civic infrastructure. His name adorns Cornwallis Street in the north end, and Cornwallis Park in the south (where a statue of the former governor stands). The idea was shot down 8-7.

“That was really frustrating,” says Thomas. “They had a discussion about a historical Indigenous injustice without any actual Indigenous perspective or voice in the room.”


Numerous groups, including the Mi’kmaw Friendship Centre and the Cornwallis Street Baptist Church (soon to change its own have asked to reexamine the use of the former governor’s moniker on public property. But that wasn’t enough to sway a majority of councillors last year.

“I personally believe Cornwallis, he might not have been a perfect figure in history—the only one that was, we crucified him,” said Preston-Chezzetcook-Eastern Shore councillor David Hendsbee at the time. “I probably offended someone just saying that.”

“Even for his time he was not a pleasant guy,” says Cleary. “He didn’t come here to found Halifax out of some sense of moving to the new world. He was an army officer who was told he had to go do that. Then we went back to England and basically raped and pillaged the Highlands in what was called ‘pacification.’”

Inspired by Thomas’ words, Cleary told council yesterday that in two weeks he’d be bringing forward a new motion for a public engagement on how HRM celebrates Cornwallis.

Thomas was thrilled to hear the news, even if she remains cautious about what a public engagement in the very-white HRM might reveal.

“The vast majority of Haligonians are white people who can trace their lineage from settler ,” says Thomas. “Again, the populace who doesn’t really have a perspective on an Indigenous story might say ‘They’re trying to erase history.’”

That’s not what this is about, she says. It’s about looking back at the city’s past and having a conversation about which parts we choose to put on a pedestal.

“I don’t want to erase history,” she says. “I just don’t want to honour him anymore. There’s a difference between remembering and honouring.”