Premier's office has plans for fixing toxic water, but what they are and how HRM is involved has yet to be disclosed. 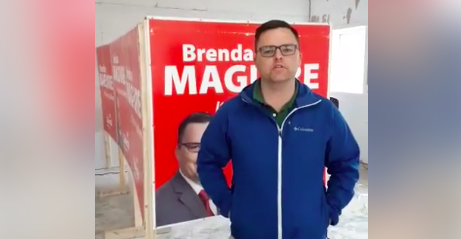 Whatever plans the Liberal party has for cleaning up toxic water in Harrietsfield, HRM knows as much about it as the general public.

In a Facebook Live announcement on Wednesday, incumbent MLA candidate Brendan Maguire announced the province and HRM would be working together to finally flush out toxic heavy metals leaking from the RDM Recycling facility on Old Sambro Road into the area’s drinking water.

“I just got off the phone with the premier’s office,” Maguire says in the video. “We just got a commitment, and it has been released to the media, that the province and this government will work with the city to clean up the RDM site.”

No such release was sent to The Coast and nothing appears on the party's website, but leader Stephen McNeil later told Global’s Marieke Walsh that the party was “talking to the municipality about options for cleaning up the site.”

“We were just told that they would be looking at addressing the contamination on site and that they would be making some request of us to consider it,” says MacKinlay. “We have not received any formal request. We've not initiated any further conversation, and that's where it is right now.”

There were no other communications between the Liberals and the municipality, nor was MacKinlay aware of any other details or potential financial commitments.

“All it is, at this point, was a five-minute conversation.”

A statement from the Liberal campaign sent out late Friday afternoon wasn't any more forthcoming about the specifics.

“We have had an initial conversation with our municipal partners and we'll be seeking to meet with them to discuss a partnership and the best option for cleaning up this site.”

It’s unclear if the proposed cleanup is only an election promise or some form of official government commitment. In his Facebook video, Maguire appears unsure himself.

“What that plan looks like right now, I don’t know, but I can tell you this is huge news to the community,” he says.

The Progressive Conservative party quickly seized on the issue, claiming in a press release that Maguire was “playing games” with the people of Harrietsfield.

“The McNeil Liberals owe voters in Halifax Atlantic an immediate explanation about why they are misleading families about securing municipal and provincial funding to clean up the RDM recycling site,” writes Tory spokesperson Angie Zinck.

Requests for comment from Maguire were not returned, though the Liberal party defended his Facebook announcement in its statement.

“Brendan Maguire, as MLA for this community, was a tireless advocate for the people of Harrietsfield. He felt it was very important to communicate our party's intention to address the cleanup of this site.”


The quasi-announcement comes days after Maguire faced sharp criticism during a community meeting on safe drinking water, and two weeks after area resident Marlene Brown became the first person ever to file for prosecution under Nova Scotia’s Environment Act. Brown wants to take the two numbered companies behind RDM Recycling to court for their continued failure to remediate the former industrial dump.

Journalists Chris Benjamin and Rebecca Hussman detailed the long history of the Harrietsfield crisis and Brown’s unyielding fight for clean water in last week’s issue of The Coast.

Despite Ministerial Orders, court rulings and political promises, the land’s private owners have refused to pay for its cleanup. As Benjamin writes, the reluctance of Nova Scotia's government to enforce its own orders and the opaqueness of is legal procedure has left area residents perplexed.

“The residents have never been kept apprised,” Lisa Mitchell of East Coast Environmental Law told The Coast. “Multiple requests for meetings have been denied with the minister’s polite dismissal, ‘We’re taking care of it.’”

If the province was committing to taking over the estimated $10 million cleanup costs, it would be a dramatic shift in the policy landscape.

Halifax, and the residents of will just have to wait to find out.