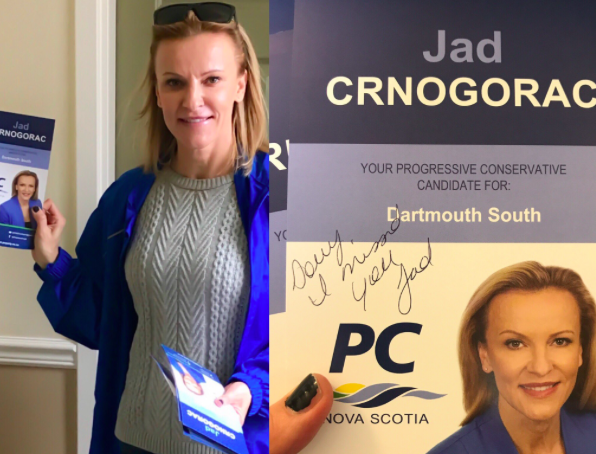 Deleting your social media accounts is the secret to a happier, more fulfilling life, but it’s also particularly important if running for public office.

Case in point, this week on the provincial campaign trail two more political candidates were betrayed by their timelines.

On Monday evening, NDP candidate Bill McEwen withdrew from the race for Dartmouth East after CTV Atlantic uncovered sexist content he published online in 2011. On Tuesday afternoon, Jad Crnogorac was dropped by the Progressive Conservatives in Dartmouth South over tweets she wrote about sexual assault and race.

On a now-offline website known as The Bullpen, McEwen previously wrote that “in a world of breast implants, fast food and cheap beer, what’s not to love about being a man.” According to CTV’s report, he also posted offensive slang words for LGBT+ individuals on Facebook in 2012 and 2013.

Meanwhile, Crnogorac tweeted in 2015 about a co-worker’s joke that “women’s viagra” is “called a Roofie.” She also posted last year that “Not one white person nominated for a BET award. If that’s not inequality I don’t know what is.”

There’s been no comment at press time from Crnogorac, but In a Facebook post in response to the party dropping her as a candidate, Crnogorac tore into the Conservatives for quickly deciding her “lapse of judgement” was worth dismissal while male PC candidates like Matt Whitman remain on the ballot despite their own transgressions.

Whitman drew social media ire back in March when he shared a video of himself running around a car after yelling “Chinese fire drill.” The city councillor publicly for remarks that many called racist, but stopped short of dropping out of the race for Hammonds Plains–Lucasville.

“I am incredibly let down by Jamie Baillie and his senior campaign staff," Crnogorac writes on Tuesday. “In 2017, a woman should never be asked to cover up, shut up and step aside. That's exactly what I was asked to do. On the other hand, my male counterpart whose actions were arguably worse than was protected and defended. The PC party claims to support women in politics. Aside from allowing women to run, I have yet to see proof of this.”

Crnogorac says she's declined an offer from the Tories to step down and help them “make this go away as quickly as possible” and is exploring options to run as an independent.


McEwen, meanwhile, issued a statement Monday night taking “full responsibility” for the remarks and for what he called “really poor judgment.”

“Sexism, misogyny and homophobia are pervasive within our culture,” writes McEwen. “We must work hard to combat these, and other forms of oppression within our communities and within ourselves.”

Party leader Gary Burrill distanced himself from McEwen in comments made to the Canadian Press, saying the party overlooked the posts during the vetting process.

Candidates dropping out when offensive social media posts are daylighted has become a routine occurrence the internet of politics. The federal election in 2015 saw a plethora of candidates exposed for sexist, racist and insulting remarks posted in years past.

This election has seen all three of Nova Scotia’s major parties cast-off collateral damage because of inexcusable browser histories.

Only a week ago a similar scandal ended the campaign hopes of Matt MacKnight in Pictou East. The Liberals quickly dropped MacKnight after his four-year-old posts—one of which seemingly mocked people with Down syndrome—were published by Global News.

Because it’s past the deadline for candidates to withdraw, McEwen’s and Crnogorac’s names will awkwardly remain on the ballots in Dartmouth East and South. The NDP and Tories will be unable to nominate any replacement candidates.