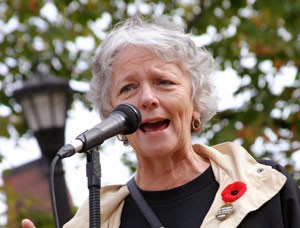 An American author saw a void in books about Canadian female politicians, so she decided to fill it.

Madelyn Holmes is currently in Halifax to promote her latest book, Working for the Common Good: Canadian Women Politicians, in which she profiles eight different women from the New Democratic Party. Holmes’ interest was piqued by reading the autobiography of Thérèse Casgrain, who was a member of the social democratic Co-operative Commonwealth Federation (which later became the NDP when it merged with the Canadian Labour Congress) and held office in the ‘50s.

“I was utterly thrilled to find out about this party,” says Holmes, “because in the United States there really was no such party.”

In doing more research, Holmes noticed social democratic women weren’t getting much recognition in the history books. So, she took it upon herself to write her own history book.

“This is something that I was driven to do. I mean, it should have been done a long time ago, of course. But it wasn’t.”

Alexa McDonough, the second woman to lead the NDP federally, is the last person profiled in Working for the Common Good. She was in attendance for the book launch at Mount Saint Vincent University on Wednesday.

“It’s not exceptional anymore for women to be running and getting elected,” she says. She’s not arguing there’s no longer sexism in politics— “that would be ridiculous” —but she feels women don’t face the same number of barriers anymore.

“One of the things that happened when I ran is a lot of disapproving women really made it known that they thought it was terrible that I was running when I had two small kids,” she recalls. “But overwhelmingly, women were supportive—even when I was such a rare bird.”

McDonough also points out she had female mentors to help guide her.

“I was very blessed by women who influenced me in a big way.”

Holmes says that kind of example is crucial: “We need heroines.”

In the recent provincial election, Nova Scotia reached a record number of women in seats at the Legislature: Seventeen out of 51, or 33 percent. This is just a small jump from the last election, in which 15 women took seats.

Rafah DiCostanzo is one of the newly-elected female MLAs, replacing fellow Liberal Diana Whalen in Clayton Park West after she chose not to run for re-election. Although the Liberals fielded the smallest number of women (12 out of 51), the party saw the most women elected. The Liberal caucus now has seven women, while the NDP and PC both have five.

For DiCostanzo, the decision to run wasn’t easy to make. Despite being the vice president of the NS Liberal Women's Commission, working to encourage other women to take part in politics, she hesitated when the opportunity arose for her.

"As an Arabic woman, to think of running, it’s just not something—we’re not brought up with it," she says. "I have nobody in the family that know anything about politics."

Eventually, she changed her mind.

“I sat down and said, ‘I’m a hypocrite.’ Here I am, I’m trying to tell every woman to run. But the opportunity is sitting here and everyone is encouraging me, telling me, ‘You can do it,’ and I’m saying I’m afraid.”


DiCostanzo was surrounded by people who bolstered her, so she wants to do the same.

“I encourage so many other women, I hope, in the future.”

A second book launch for Working for the Common Good is taking place at the Halifax Central Library at 6:30pm.