Eight-person expert panel proposed to determine the fate of Cornwallis

Terms of reference for the citizen committee, made up of Indigenous and non-Indigenous residents, will be debated by city council on Tuesday. 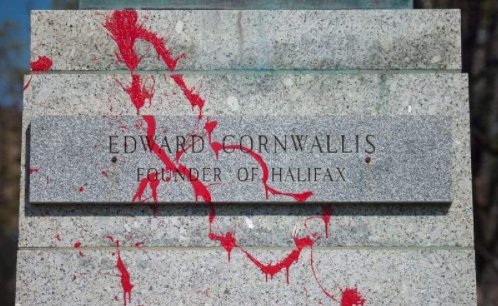 Eight people will help decide Edward Cornwallis’ place in history, but it’ll be up to the 16 members of Halifax Regional Council to follow through on the expert panel’s advice.

The municipality has released its tentative terms of reference for the special advisory committee it hopes to task with examining Halifax’s commemoration of its controversial founder.

The terms of reference, which will be debated by Regional Council at its Tuesday meeting next week, were developed by staff after discussions with representatives from Aboriginal Affairs, local historians, Parks Canada, Mi’kmaq scholar Daniel Paul and the Halifax Military Heritage Preservation Society. A draft version of the document was also shared with the Assembly of Nova Scotia Mi’kmaq Chiefs.

The committee, when it's formed, will be tasked with conducting historical research and public engagement on HRM’s commemoration of Edward Cornwallis and the area's Indigenous and report back to council with recommendations on its findings.

Staff are suggesting an eight-person panel be struck, composed of experts on military and Mi’kmaw history, and those with Indigenous and non-Indigenous community experience. Two co-chairs—one Indigenous, one non-Indigenous—will lead the committee.

Four of the experts proposed by staff are selected out of nominations put forward by the Assembly of Chiefs. But for now, none of those names being released. The identities of the panel members are contained in a separate in-camera report and will only be disclosed to the public after confirmation from on Tuesday.

No deadline is included in the proposed terms of reference. Staff only suggest the panel should first tackle and report back on Cornwallis’ legacy before reconvening on the broader issue of how to best celebrate the region’s Mi’kmaq heritage.

Cornwallis, who commanded British troops as they raped and murdered their way through the Scottish Highlands, founded Halifax in 1749, in direct violation of England’s treaties with the Mi’kmaq. The same year Cornwallis issued a proclamation for Mi’kmaw scalps in an effort to “destroy” the area’s Indigenous population.

In recent decades, thanks in no small part to the advocacy of scholars like Daniel Paul, Cornwallis’ legacy has increasingly found itself debated inside City Hall. Councillor Shawn Cleary proposed this, HRM’s latest effort to start a conversation on how the city honours its complicated founder, after being inspired by a performance from poet laureate Rebecca Thomas this past spring.

A statue of the infamous governor still stands in the south end park that’s also named in his honour. It was erected by CN Rail in 1931—partially to increase Halifax tourism. The name of Cornwallis Street in the city's north end, meanwhile, dates back at least as far 1817, according to staff.

The only other HRM-owned asset branded with Cornwallis’ name was a Dartmouth Ferry that was sunk beneath the waters off Georges Island in 1944 after its engine room caught fire mid-transit.

Current municipal policies don’t allow for the renaming of either Cornwallis Park or Cornwallis Street, however. A civic street name can only be changed for public safety reasons, or if initiated by—and with 100 percent agreement of—the road’s property owners. Park bylaws only offer renaming scenarios for a “living person who no longer meets the criteria for which they were commemorated.” Edward Cornwallis, being very dead, skates through that loophole.

Rules can change, though. Staff suggest council could amend both policies to allow for renaming, depending on the committee’s advice.

Total costs for the expert panel’s work is estimated to run between $50,000 to $75,000, with a large chunk of that expense taken up by public engagement. Even that process, when it comes to Cornwallis, won't be cut-and-dry.

Traditional methods of public consultation might need to be altered, staff note, given that Mi’kmaw territory—and thus the community most impacted by the continual celebration of Cornwallis—doesn’t readily align with the municipality’s borders.

And there's no guarantee any of this will result in any changes. Recommendations brought back by the expert panel will still need to be debated and voted on by  council.

Staff also caution that some residents will inevitably question the validity and credentials of a small table of fallible experts deciding what’s best for the city’s soul. Indeed, that’s already been a concern brought up numerous times during staff's consultations about the terms of reference.

“More than one individual suggested that while experts, narrowly defined, have an important role to play in the discussion, the key challenges being addressed—namely how we choose to remember the past, what do we do in terms of understanding our relationship with the past, and how that informs and influences us today—are questions for community, citizens and politicians rather than for experts.”