The National Inquiry into Missing and Murdered Indigenous Women and Girls holding community hearings in Membertou First Nation this week. Journalist Maureen Googoo is live-blogging the hearings each day on Twitter and sharing coverage from her crowd-funded news site, Kukukwes.com, with The Coast.

More stories of pain, survival and seeking justice were heard on day two of public hearings with the National Inquiry into Missing and Murdered Indigenous Women and Girls in Membertou.

Family members and a childhood friend of Victoria Paul of Indian Brook First Nation, told commissioners Tuesday how her sudden death in 2009 affected their lives.

“My son is going to grow up with no grandmother now,” Deveron Paul, Victoria’s son, told the public inquiry on Tuesday.

“I just want answers on what happened to my mother. It still hurts me, ” he said.

Paul, 44, was arrested for public intoxication outside of a bar in Truro, on August 28, 2009. She suffered a massive stroke while she was in police custody but she wasn’t transported to a hospital 10 hours after she arrived at the jail cell.

She was transferred to the QEII Health Sciences Centre in Halifax. Paul died on September 5, after her family decided to take her off life support.

An initial investigation conducted by Halifax Regional Police into the conduct of Truro Police in Paul’s case found no wrongdoing. However, a report by the Nova Scotia Justice Department found that Truro Police didn’t properly monitor Paul while she was in police custody nor did it provide her with timely access to medical help.

Cheryl Maloney, president of the Nova Scotia Native Women’s Association, has advocated for justice for her childhood friend since she first became president of the organization in November 2009. She told the inquiry she wants a public inquiry into Paul’s treatment while she was in police custody.

“The inquiry here, it’s our last resort in Canada. I’ve taken this as far as I could,” Maloney told inquiry commissioner Michèle Audette. 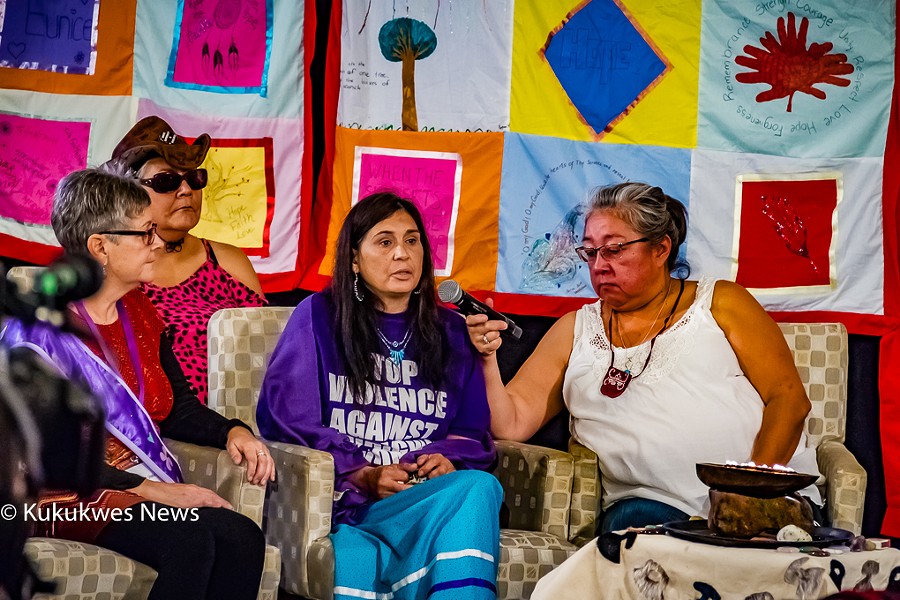 Darlene Gilbert’s story
Darlene Gilbert, a Mi’kmaw woman with the Annapolis Valley First Nation, shared her survivor story on how the legacy of the residential school system and being placed in foster care affected her upbringing in Halifax.

Gilbert told commissioners her mother was raped by a priest while she attended the Shubenacadie Indian Residential School. She said her mother, who became an alcoholic, died of complications from alcoholism at the age of 39.

“From the trauma of the residential school,” Gilbert said.

Gilbert said she grew up with two alcoholic parents while living in Dartmouth. She said she was raped by one of her parent’s drinking friends when she was nine years old.

“I grew very insecure,” she said.

“My mother and father (were) always fighting about that she wanted to be home with her family and take me home to my people,” Gilbert said.

Gilbert said she acted out after she was raped and as a result, she was removed from her home and was placed in the children’s ward of the Nova Scotia Hospital because child services didn’t know where to place her.

Gilbert said she became a ward of the province after her mother died when she was 12 years old. She didn’t attend her mother’s funeral but one of her uncles from the Annapolis Valley First Nation eventually took her to her mother’s grave.

Gilbert said she started drinking when she was 16 years old and for a brief two weeks, she was sent to the Nova Scotia Home for Coloured Children even though she was half Mi’kmaq and half white.

When she arrived at the home, she was jumped and groped by two boys. She also said a male counsellor also raped her while she was at the Nova Scotia Home for Coloured Children.

As a young adult, Gilbert said she began abusing drugs and became addicted. She said her addiction led to hustling on the street, violence and abuse. She later lost her son and daughter because of her drug addiction.

Gilbert said she decided to quit drugs when she moved from British Columbia to Nova Scotia in 2000. She said she has only relapsed one since she decided to become sober.

Natalie Gloade’s story
Natalie Gloade from the Millbrook First Nation told the inquiry about her mother, the late Nora Bernard and the pain she carries over the way her mother died in December 2007.

Nora Bernard was the president of the Survivors of the Shubenacadie Indian Residential School, a group that filed a class action lawsuit against the federal government and the Roman Catholic Diocese of Halifax in the mid-1990s. The group was seeking compensation for the abuse they suffered while they attended the school.

Bernard’s class-action lawsuit eventually led to the Indian Residential School settlement agreement and an apology by the Government of Canada in 2008.

Bernard was found dead in her home next to the Millbrook First Nation, on December 27, 2007. Bernard’s grandson and Gloade’s son, James Gloade, was charged in her death. In 2009, he pleaded guilty to manslaughter and is serving a 15-year sentence.

During the sentencing hearing, the court heard that James Gloade had smoked crack cocaine and took prescription medication the day he killed his grandmother. When she refused to give him money, he hit her head several times before he slit her throat.

Gloade recalled the last time she saw her mother alive on Christmas Day.

“She hugged me so tight and she said, ‘I’m going to put all my strength in you, ,’ she said. And she rubbed my back and she just held me,” Gloade said.

“And then I went to the door and I said, “I love you, too, Mom.’ And that was the last time I saw my Momma alive,” she said through tears.

Gloade said she has had people have come up to her to say that she is the mother of a murderer.

“I apologized to the Nation as a whole for what my son did,” she said.

The national inquiry is considering requests from families to hold community hearings in New Brunswick and Newfoundland and Labrador.

The MMIWG inquiry holds its final day of hearings on Wed. November 1 at 8:30 am in Membertou.