National inquiry wraps its third and final day of hearings in Membertou. 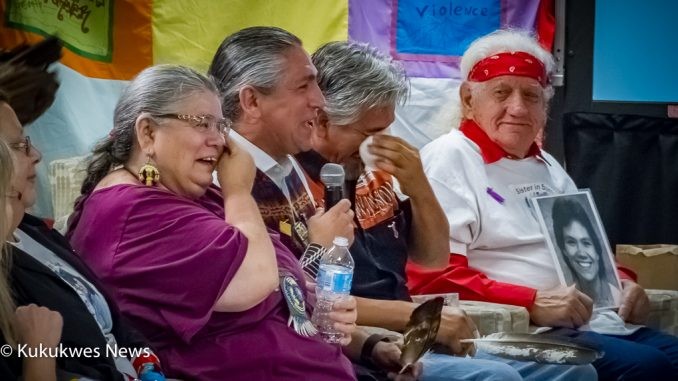 The National Inquiry into Missing and Murdered Indigenous Women and Girls held community hearings in Membertou First Nation this week. Journalist Maureen Googoo live-blogged the hearings each day on Twitter and shared coverage from her crowd-funded news site, Kukukwes.com, with The Coast.

The families of Virginia Sue Pictou-Noyes and Tanya Jean Brooks told the MMIWG inquiry hearing in Membertou on Wednesday that they need answers about their missing and murdered loved ones.

For the family of Virginia Pictou-Noyes, they want to know where she is. For Tanya Brooks’ sister, she wants to know why her killer hasn’t been arrested.

The National Inquiry into Missing and Murdered Indigenous Women and Girls, or MMIWG, wrapped its final day of hearings in Membertou First Nation, Wednesday.

Since Monday, the national inquiry heard from approximately 50 families and survivors who registered to participate in the Membertou hearings. Ten of those who registered gave their testimonies in public.

Father says Virginia is in the “spirit world”
Virginia Pictou-Noyes was last seen at the Eastern Maine Medical Center in Bangor, Maine on April 24, 1993. Police took her there after she was severely beaten by two men outside of a bar in Bangor. The 26-year-old woman left the medical centre while staff tended to a shooting victim.

Virginia’s siblings said their sister, who had five children, was a victim of domestic violence and allege her husband and brother-in-law, the two men who beat her that night, are responsible for her disappearance and death.

“No woman should be hit, slapped, cursed or hurt in any way,” Francis Pictou, Virginia’s older brother, told the inquiry.

Francis, 52, said his family has used cadaver dogs to search through woods in Maine looking for their sister’s body. He also tried to reach out to one of the men he believes is responsible for Virginia’s disappearance to find out where they took her.

“To us, she’s missing. To the guy who killed her, she’s not missing. He put her someplace,” Francis said.

Robert Pictou, Jr., explained to the commissioners about his family’s difficulty in getting information from officials in Maine about his sister’s disappearance.

“We have absolutely nothing to prove to you that my sister is gone,” Robert, Jr. said.

Virginia’s sister, Agnes Gould, said the family also wasn’t notified when her sister’s five children were placed foster care because they live in Canada. She recommended to the commission that a dialogue about border issues needs to happen.

She also recommended that families should be offered education for the prevention of violence against women, children, two-spirited, transgender people and men. 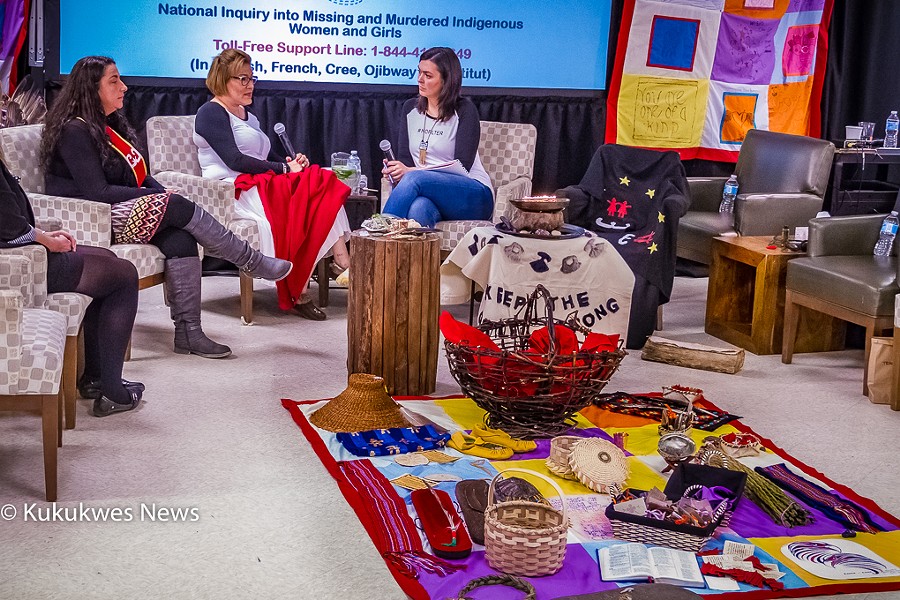 “They set her up to fail” —Vanessa Brooks
Vanessa Brooks, the sister of Tanya Brooks, was the final person to give public testimony at the MMIWG inquiry hearings in Membertou. She spent Wednesday afternoon telling Tanya’s story from childhood up until she was found dead on May 11, 2009.

Vanessa said she and her siblings grew up in a home where there domestic violence and alcoholism and at one point, they were placed in foster homes. She said that was the start of the breakdown of her family.

When Tanya, 36, was killed, Vanessa said she was struggling with addictions and had her five children taken away. She said Tanya had difficulty trying to meet the conditions placed by Mi’kmaw Family and Children’s services in order to regain custody of her children.

“They set her up to fail,” Vanessa said.

A few months before Tanya death, Vanessa said a drug dealer in Halifax used a steel pipe to severely beat her. She said paramedics had to revive Tanya while she was being transported to the hospital.

“He beat so bad that the pipe broke,” Vanessa told commissioner Qajaq Robinson.

Vanessa said the individual was charged with attempted murder but pleaded guilty to aggravated assault. The man was sentenced to five years in prison in February 2009, three months before Tanya was found dead.

Later on, she said her family heard that a $2,000 bounty was placed on her sister’s head.

“Geez, I wonder who would have done that?” Vanessa said.

The National Inquiry into MMIWG released an interim report on Wednesday. One of the interim recommendations includes establishing a national police task force to review cold cases.

Chief commissioner Marion Buller said she will be asking the federal government for more money and an extension to continue their work. The inquiry’s final report is due on November 1, 2018.